The Jurassic Road to Switzerland. 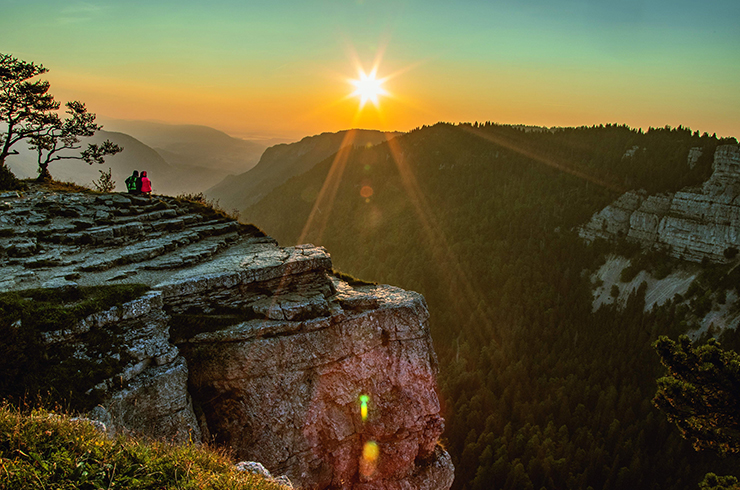 Everyone knows Steven Spielberg’s movie “Jurassic Park” (1993), but not many people realize that the name comes from some of the most amazing mountains in Switzerland. It is possible to travel to it in the summer and cross it along a unique landscaped road, captivating pedestrians with its magnitude, panoramic views of the Alps and the generosity of its people.

The Jura Peaks Trail (SPJ) passes through the Swiss Jura Heights, describing a wide arc in a northwestern direction, starting at Dielsdorf and ending at Nyon, covering 320 kilometers divided into 16 daily stages.

The view of the Alps, the Black Forest, and the Voge Mountains is most impressive on this route as the park explores steep rocks and deep caves, sources of rivers and lakes, silent forests and vast meadows.

“Known dinosaur sites and museums are not directly in the SPJ, although some, like La Heutte, are 10 kilometers away,” explains Swiss Tourism Authority spokeswoman Elena Aveltranger.

Walking the tops of the Jura Trail, the oldest of the Swiss Long Trails, which connects Zurich with Lake Geneva in a large arc and in a 16-stage day trip, not only does the magnificent walk of mountain landscapes, but it also means travel to the far past, as the area you cross It is the reference point for the Jurassic era.

Its name comes from the Jura Mountains, whose main geological formation is an accumulation of limestone with an abundance of fossils, according to treatises on the history of science.

According to these historical sources, German naturalist and explorer Alexander von Humboldt used the term “Jurakalk” (something like “chalk or limestone of Jura Mountain”) to refer to carbonate rocks in the Jura Mountains, in 1795, when he traveled to Switzerland and Italy for botanical and geological purposes.

Later, in 1829, the French mineralogist and zoologist Alexandre Brungniart published the term “Jurassic” in a scientific article, to refer to the same mountain system, which was formed during the aforementioned geological age.

In the fingerprints of the great broth

“Known dinosaur sites and museums are not directly on the Jura Peak Trail (SPJ), which is an elevated trail, although some are located at distances between 10 to 30 kilometers (km),” he explains. To Yves Elena Aveltranger, Director of Communications at the Swiss Tourism Authority.

“For example, Stage 7 of this route (www.schweizmobil.ch/fr/suisse-a-pied) is only 10 kilometers from La Heutte, on which there is a road that follows the great Saurians, he explains.

He adds that one of the most important dinosaur sites is Ajoie, about 50-60 km from the SPJ.

Besides its Jurassic references and dinosaur routes, which the interested park with a car can visit, this trail has a lot to offer without having to abandon its route and allows you to discover very diverse landscapes, far from mass tourism.

The SPJ, which began tracing its course in 1905 starting at Zurich and ending shortly before arriving in Geneva, traverses the Swiss Jura highlands, describing a wide arc in a northwest direction.

This trail runs in both directions, starting at Dielsdorf and ending at Nyon, and covers a distance of 320 km, representing a high level of physical demand for hikers.

READ  George Floyd's brother arrives at the Capitol to testify

What’s even more impressive about this route is seeing the mountain systems of the Alps, the Black Forest, and the Regiment from a distance, according to the Swiss Tourism Authority.

Traveling through it, the park stumbles upon steep rocks and deep caves, sources of rivers and lakes without a clear drainage stream, silent forests and vast meadows. You can also enjoy unforgettable experiences by observing wildlife or just enjoying a midway flower.

Hiker can also discover the different ways of life in each region and their different styles of homes and towns, as well as gastronomy with different flavors, and sample local specialties in the many restaurants and mountain lodges or “métairies” that they find in their stride.

Landmarks of the Jurassic Road

With 16 stages for a day, SPJ has a lot to offer. Here are some of the most notable experiences:

1.- From Dielsdorf, cross the vineyards on to Regensberg, on the descent of Schartenfels. Then follow the path over the Lägern Hills and admire the beautiful scenery of Old Baden.

2.- Discover the unusual geological features of the area, walk through forests and meadows, climb the Roggenflue outcrop with countless steps and enjoy the views of the Maitland Plateau.

3.- Walk through the valleys of Saint-Imer and Val de Rose, passing by Le Pâquier. From Chasseral, which is very close, you can see the Three Lakes Region.

4.- Start before dawn towards the Creux du Van rocky circuit and think of the start of the day and Lake Neuchâtel this majestic natural amphitheater. It is the Swiss equivalent of the Grand Canyon in Colorado.

5.- On the road that crosses meadows and forests, you can enjoy the views of Le Chasseron Mountain, one of the highest peaks in Jura, and finally go to Les Rochats restaurant.

6.- In addition to enjoying the wonderful Vaud Jura along the road, not far from the Swiss-French border, it is recommended to have a coffee and try the local ice cream at the métairie (mountain lodge) La Thiolle.

7.- Walk around Valorby, where ancient metal crafts and the railways are the main focus.

8.- On a clear day, enjoy views of at least eight lakes, including: Lac de Joux and Lac de Brenet located in the Joux Valley. From the summit of Dent de Follion you can see all of western Switzerland under your feet.

9.- Amble in Le Pont Along the promenade on the banks of Lac de Joux, the largest lake in the Jura, and enjoy a great view of the Alps and Mont Blanc, from Mont Tendre (1679 meters).

10.- Descending from Mont Tinder, where you can enjoy watching Lake Geneva, through the pastures, forests and colorful meadows of the Jura, allows you to discover the long, dry stone walls, which are an ideal habitat for lizards, insects and birds. Written by Ricardo Segura. Efe report and photos