The end of the transition period: What Brexit will mean for science from 2021 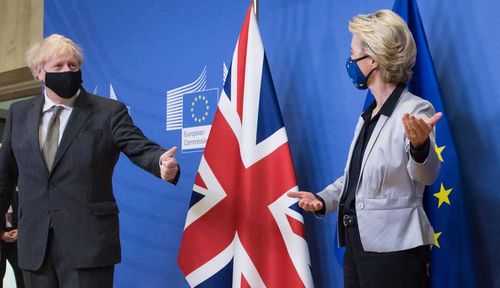 Not long ago, it was on the table: the Treaty of Future Cooperation between the European Union and Great Britain. On December 24, negotiators reached an agreement. Time was of the essence, as the transition period that followed the UK’s exit from the European Union on December 31 ended.

From 2021, researchers will generally need a visa to stay in the UK for more than six months. If you are an employee of a British university, the new points-based system will apply UK immigration system. On the other hand, if researchers are funded through a scholarship or a third-party funded project, they can enter via simplified visa procedures, which “Global Talent Visa Path“.

For shorter studies or research of up to six months, you do not need to apply for a visa to enter the country. In addition, short stays can be done without a visa if teachers want to participate in selection committees or take exams in Great Britain.

During the final meters of negotiations, British Prime Minister Boris Johnson announced that he would continue to participate in the “Horizon” programme, but would withdraw from the “Erasmus +” programme. Students must continue to come to Northern Ireland only on Erasmus terms. The Irish Government intends to continue funding residency through the programme. However, Erasmus+ scholarships approved until the end of 2020 are insured across the UK for their duration.

The Erasmus program is one of the most successful programs of the European Union and serves as the flagship program for European exchange. Johnson justified the exit with the program’s exorbitant costs. According to negotiators, further involvement would have cost the UK several hundred million pounds. According to the announcement, the British government wants to create an alternative for local students through the “Turing programme”. Around 35,000 students will be funded with around £100m in funding in 2021-22.

There is currently no offer for EU students. For them, studying abroad in UK universities will become much more expensive. International student fees are much higher in the UK than for domestic students. So far, local fees have been applied to EU students. That will change with the exit from the European Union.

“We want to do our best to continue to attract students from the European Union.” Ota Steiger, UCL

Observers of negotiations such as the merger of British universities “Universities of the United Kingdom” explain the British government’s withdrawal from Erasmus with the fact that the proportion of British foreign students has decreased recently, about 7.4 percent, which is much lower than the proportion in other countries. In addition, only 42 percent of those went abroad through the Erasmus programme.

British university president Vivien Stern described the exit as “clearly disappointing”. The Turing program is a ‘cool development’ for British students who want to spend time in another country. The task now is to find a solution for international students in the UK. She justified it mainly with the tuition fees they paid. EU students contributed around £440m to the UK economy in 2018. Stern fears that share will fall with Erasmus, and he advocates simple visa regulations from the British side, and for adequate financial support for students from the EU. .

Science sponsors and universities are working on concepts on both sides to keep students exchange as best as possible. Dr. says. Ota Steiger. She is the Managing Director of the European Institute at University College London (UCL), which describes itself as “Global University of London” and has the highest percentage of EU students in Great Britain.

“Students from other EU countries contribute to the diversification of teaching. This particularly enriches courses that deal with region content, such as European languages, Eastern European studies, EU politics or EU law,” Steiger says.

Literary researcher Dr. Sebastian Matzner, who has researched and taught in Great Britain since receiving his Ph.D. He describes the Turing program as a placement program for the British rather than an exchange program like Erasmus Cannes.

“Many students have remained loyal to the UK as scholars,” Steiger says. “We want to keep these young talents with us in the future.” You see one option for universities like UCL in lowering fees for individual programs at the university for international students. On the other hand, fees cannot be reduced alone and across all courses of study for EU students. This would violate the prohibition of discrimination against other international students.

The German Academic Exchange Service (DAAD) would like to check how its funding portfolio is adapting to the new situation and is appealing to German universities to negotiate with UK partner universities about fee waivers or reductions. The British government’s decision was described by the head of the DAAD branch in London, Dr. Ruth Krahey, as “Very Unfortunate”. In order to strengthen European university networks, the announced Turing program can be at best complementary to the Erasmus+ programme.

Karahi expects the effects of leaving the Erasmus program to be felt directly and gradually – depending on the funding group. “In the case of self-income payers, an immediate change can certainly be seen from the 2021/2022 school year,” she says. It remains to be seen how strong the exit effect will be. “Some students will certainly be able to and will pay the higher tuition fees.”

There will be a gradual change between Erasmus+ scholarship holders, because no more scholarships will be awarded until the current scholarships expire in 2023, and the DAAD funding programs will see an increase in the number of applications for Great Britain as the host country. This trend has recently appeared in preliminary statistics from the funded organization.

Details of participation in the $95 billion Horizon Europe program from 2021 to 2027 have yet to be negotiated. Johnson wants to continue participating in the program because he assumes Britain will be a “science superpower” but a “collaborative science superpower”. His government made clear the importance of the country’s research collaboration early in the negotiations.

Cooperation via Horizon could have failed due to the financial framework. The UK’s contribution will be measured based on the country’s GDP. If researchers receive more than they paid from the EU fund, the British government must pay additional. However, they should not get any money back if the scientists collected less money than they paid. Johnson wanted to prevent this and wanted to introduce a safeguard mechanism that was initially considered to ensure that Great Britain would not pay more than it eventually receives.

Great Britain remains one of the strongest countries in competition for money from the European Union, but according to an assessment by the British Royal Society, the annual share of total funding has fallen by nearly a third since 2015.

Science watchers can imagine that after the term “Horizon Europe” from 2021 to 2027, with more time, Great Britain could consider a more predictable exit from the research programmes. The government has already developed alternative ideas for research funding in the absence of association.

It was a long and uncertain process. With the agreement, we finally have more clarity. Ota Steiger, UCL

“Overall, I am happy that we have reached an agreement and that a disorderly Brexit can be prevented,” says UCLA’s Steiger. “It was a long and uncertain process. The others and I felt that in our exchange with the scientific community. With the agreement, we finally had more clarity.”

So far the frightening “immigration” from Great Britain has not shown itself at the university. A total of 21 percent of the workforce is currently from European Union countries and the percentage and absolute number have increased in the past three years. So far, this also applies to students. There are currently about 5,300 foreign students out of about 21,000 foreign students from the European Union, at the time of the referendum, there were about 4,900.

Senior lecturer Matzner also says that hardly any scientists in his environment left Great Britain because of Brexit. However, he is critical of the development of the British higher education system. “Brexit is part and symptom of further social and political upheaval, the consequences of which are weakening Great Britain as a locus of science.” It reflects on the increasing economic orientation of universities, the impact of terms such as “impact” or “value for money” and higher tuition fees in general.

How the exit from Erasmus will affect the numbers will become clear from the next phases of implementation and also depends on the alternatives developed for EU students. The agreement now passed between the EU and Great Britain will initially be applied provisionally until the end of February 2021. The paper is still to be approved by the European Parliament, which is more than 1,200 thick.