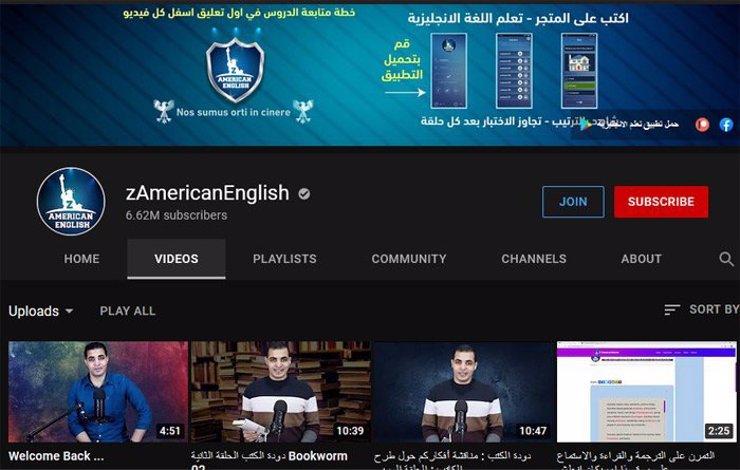 YouTube is the most famous and largest platform on the Internet, for uploading and watching videos, radios and live broadcasts, with more than 2 billion monthly users, with more than 30 million daily users.

It has more than 50 million content creators, there are a huge number of YouTube channels in all fields, there are educational channels, news channels, scientific, historical and entertainment channels, radio channels and live broadcasts.

In this article, we brought you a group of Arab YouTube channels, which were ranked in the list of the highest Arab channels in terms of viewership and participation, and also many of them are useful YouTube channels and will add value and knowledge to you.

Despite the diversity of our list today, and its different goals between educational and entertainment, there are common factors that led to the success and spread of these channels, and their obtaining a large audience among their target circles, so you might like to see them as well, and share with us your favorite channels!

Kabrit offers a number of vibrant youth programs on politics (such as: Al-Salit news), science (such as Al-Dahih and Al-Isbataliah), and sociology (such as: Sfartas).

The programs presented by the channel address the youth group, and use simple and easy language for awareness and scientific, social and political education. For example, Al-Dahih – which is one of the channel’s main programs – aims to simplify science and present it in an attractive and humorous way.

The program is presented by Ahmed Ghandour, a graduate of the American University of Science. The program was presented independently on its own channel until it contracted with Al-Jazeera and became one of its programs. Kabrit channel has more than 1 million subscribers and has achieved more than 175 million views since its inception in 2014.

Reasons for the success of the sulfur channel

1. Pay close attention to the quality of the content

This is evidenced by the excellent photography, where a large crew of photography professionals, film makers and directors are working on filming the episodes, in addition to the talented motion graphic designers responsible for making program introductions, graphics and infographic clips.

As for the content itself, the quality is no less, as the channel is famous for providing high-quality content that varies between scientific, humorous, entertainment and literary.

The channel is committed to publishing its episodes on a regular schedule, which helps the audience to continuously follow the channel and anticipate new episodes.

The channel encourages its followers to participate and interact with the episodes and discussions taking place on its platforms, as the content itself is interactive and encourages participation.

The channel contracted Al-Duhaih and Al-Aspetalia, after they were independent channels before.

The channel aims to teach English online for free and simply. The owner of the channel is the English language teacher Ibrahim Adel, who has been working in the field of teaching English for more than 12 years.

Through his channel, Ibrahim tries to simplify the rules of the English language for learners, and to facilitate their understanding for them to expand their opportunities for study, work and working life in general. The channel covers the beginner and advanced levels of the English language, as well as a level of conversational grammar.

The channel has more than 56 million views, and has over one and a half million subscribers since its inception last year.

Reasons for the success of zAmericanEnglish

1. The simple method of explaining the information

The largest category targeted by the channel is the English language beginners category, so Ibrahim adopts a simple explanation and a smooth method of communicating information, in addition to his use of colloquial language, which made the content closer to understanding and comprehension.

The channel provides an organized and tidy approach to learning the English language, which has saved the followers a great effort in determining their itinerary, and drawing a road map for those who want to master the English language from scratch.

The content itself is valuable and powerful, covering important topics in the English language in a maximum of 20 minutes per segment.

The channel aims to simplify and present the philosophical, social, scientific and historical facts in an attractive and smooth manner. Its episodes are presented by the educated young man, Ahmed Samir, a graduate of the Faculty of Mechanical Engineering at the American University in Cairo, and Ahmed is a teaching assistant at the same university.

The duration of one episode is between five and ten minutes, in which Ahmed presents knowledge and philosophical advice, mixed with a sense of humor and youth close to the minds of his target group, namely the youth. The number of views of Egykolgy channel has approached 20 million since its establishment in 2011.

Reasons for the success of the Egyology channel

Ahmed Samir presents distinctive and new content to most of the youth category, in a simplified style close to the mind, that makes the viewer eager to follow the episodes until the end. The channel uses a simple language that combines colloquial slang with classical Arabic and English terms.

Most of the topics presented by the channel are interesting and advanced, suitable for the aspiring and educated youth. Each episode is backed by sources for its content to verify the accuracy of the information received.

As a new episode is published every two weeks, this keeps viewers always on the lookout for new episodes.

Read also: Top 20 Arabic accounts on Tik Tok (accounts that are useful for you)

Nafham channel aims to provide free simplified explanations of the Arab educational curricula in several Arab countries such as Egypt, Kuwait, Saudi Arabia, Syria and Algeria, in all scientific and theoretical subjects. The channel is directed to all levels of study from primary to secondary school.

The number of views of Nafham channel has reached more than 103 million, and more than 630 thousand subscribers since its inception in 2012.

Reasons for the success of Nafham channel

The channel publishes content specialized in the official education curricula and what is related to education skills as a whole, making it a suitable channel for students, teachers and parents alike.

The channel offers many competitions and rewards for students that motivate them to participate in the channel and interact with the content provided. In addition to providing the opportunity for all users of the site to participate in explaining the lessons in which they compete for valuable prizes at the end of each month.

Nafham cooperates with major companies such as Rexona, Baidu and many marketing companies to promote it.

In addition to the educational content itself, there are seminars and programs on teaching skills as effective ways of studying, organizing time, choosing a higher education major, and others.

Nafham uses volunteers to explain some of the curricula through clips or through private online lessons that the student can book with one of the volunteers.

Nafham contracts with the owners of the popular blogging platforms that are in great demand to promote them. Some do this promotion for free without contracting on a voluntary basis.

In addition to holding its own workshops and events, the company also funds external events and workshops. These events are broadcast on electronic platforms, which increases Nafham’s popularity.

The Foundation aims to provide free, high-quality, interactive lessons through games and more. They also provide another service to be on the ground face-to-face with students, under the umbrella of a sub-project called “Teach Down”.

The Tahrir Academy channel has more than 21 million views, and more than a quarter of a million subscribers.

Reasons for the success of the Tahrir Academy channel

Tahrir Academy aims to explain the curricula in a simple and smooth language, which attracts students and teachers to interact with these contents and include them in their study plans.
Like Nafham, Tahrir Academy offers content specific to the curriculum and related skills and tips.

In addition to the educational curricula, Tahrir Academy offers a group of sections on chemistry, physics, astronomy, economics, distance learning, entrepreneurship and Self development. All of these contents are presented in an attractive youthful form that is different from any other channel, which created a wide audience for it.

3. Promote the channel by platforms

Due to its valuable content, many platforms have included the Academy in their lists of useful channels with high quality content.

4. Followers’ posts to the channel

Many followers share the channel and its episodes with their circles, especially those interested in natural sciences and education self Because of the channel’s specialization in presenting these topics in a simplified way.