The American ambassador calls on Lebanon’s leaders to “neutralize their differences.” 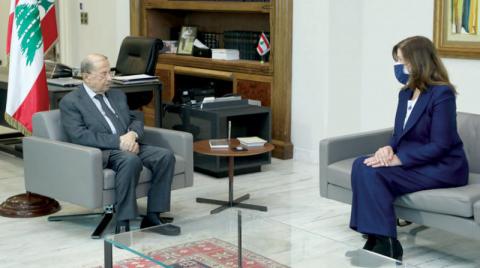 Yesterday witnessed a wide diplomatic move by a number of ambassadors in Lebanon, the most prominent of which were two meetings of the American ambassador, Dorothy Shea, with President Michel Aoun and Prime Minister-designate Saad Hariri, and a meeting between the French Ambassador, Anne Gryu, with the Speaker of Parliament Nabih Berri, and a meeting between the British ambassador, Martin Langden, and President The Free Patriotic Movement, MP Gebran Bassil.

And Chia gave a speech after her meeting with Aoun, who was distinguished by her frankness, in which she said that Lebanon needs courageous leaders who are willing to put aside their partisan differences and work together to save the country from the multiple crises it faces.

The American ambassador stated that she had contacted “a number of young political activists of all sects, and it was clear that they wanted a government that bore responsibility for their country and wanted an independent judiciary and the rule of law.”

The issue of the government was the focus of discussion between Hariri and the Maronite Patriarch Bechara Al-Rai, before a visit by Hariri in the evening to Bkerke.

In a sermon he gave yesterday, the sponsor renewed his condemnation of what happened to him, which he described as “decadence and regression.” He added, “We never imagined that the legitimacy would give up its decision, its right and its powers and become a hostage to the game of regional axes.”

The shepherd repeated his call to the brothers and friends of Lebanon in the Arab countries and the world to help him. He reiterated his suggestion that Lebanon adopt a policy of neutrality in order to restore its balance and stability. “That is why we called the United Nations to sponsor an international conference on Lebanon,” he said. We reiterate our call to rise from the lapse of forming the government so that the President-designate creates an excellent government formation and presents it to the President of the Republic and consults between them in a pure and patriotic spirit until they agree on new names and the distribution of portfolios within the framework of equality and on the basis of the Constitution and the Charter ».
… More