The 114 student marches were brutally prevented in Algiers 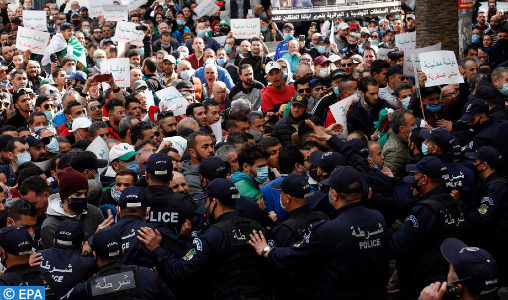 ALGERIA – Security forces brutally prevented the 114 student march in Algeria in the capital and arrested dozens of demonstrators.

And the police forces mobilized strongly to categorically prevent this student march, which drained every Tuesday in the capital Algiers hundreds of peaceful demonstrators chanting slogans hostile to the existing authority.

According to local media, which cited journalists and eyewitnesses who were violently prevented from filming the arrests and the muscular intervention of the police, this extremist position testifies to a “clear desire to close the public space in front of the movement’s activists.”

The muscle interventions on Tuesday warn of an unprecedented repressive device during the upcoming popular movement demonstrations scheduled for next Friday, according to the estimates of the same sources, who warn that the climate may be very tense because the Friday marches are more imposing and stronger than the organized protest measures. By students every Tuesday.

Therefore, the Algerian regime is trying a brutal and radical turn to regain control of the street on the eve of the election meeting on June 12th, which has become more threatened than ever by the large scale of popular protest, as these media explain. .

The Algerian League for Human Rights (LADDH) rose up against police repression and condemned the “new despotic drift” with the arrest of minors, teachers and ordinary citizens.

The National Committee for the Liberation of Detainees (CNLD), an association that aids prisoners of conscience, said that of the 20 people arrested, 12 were released at the end of the day, including academic and political scientist Louisa Dries Ait Hamdouche.

According to the specialized “Algerian Detainees” website, 66 prisoners of conscience are currently imprisoned, and they are being tried on the grounds of mobility and / or individual freedoms.

Students have been demonstrating every Tuesday since February 2019 in addition to the popular movement rallies that take place every Friday, except for the respite observed due to the Covid-19 pandemic between April 2020 and February 2021.