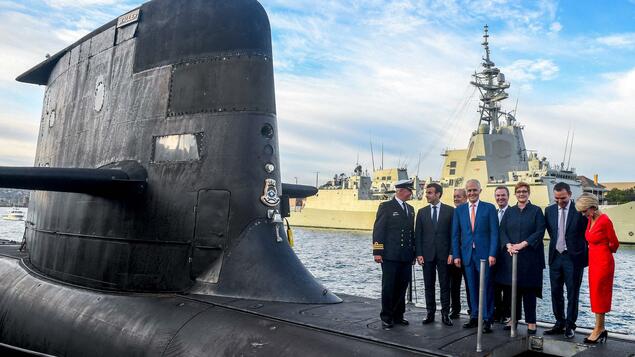 In a heated dispute over submarines between France, the USA and Australia, the French Naval Group intends to submit a “detailed and calculated proposal” to the Australian state on the costs of canceling the agreed delivery of submarines.

The company’s president, Pierre-Eric Pomlet, told France’s Le Figaro newspaper that Australia would receive a bill “in a few weeks”. “Australia terminated the treaty out of convenience, which means we are not responsible,” he said.

E-mobility, transport policy and future mobility: a brief on transport and intelligent mobility. For decision makers and experts from business, politics, associations, science and NGOs.

“It is an issue stipulated in the contract and requires payment of costs that we have already incurred and in the future,” Baumelet told the newspaper. These included, for example, the costs of “infrastructure and information technology layoffs” and “regrouping of personnel.” “We will assert our rights,” Baumelet repeated.

As US President Joe Biden and French head of state Emmanuel Macron try to bring about a rapprochement, Australian Prime Minister Scott Morrison said Macron has so far treated him with a cold.

Morrison said, on Wednesday evening, during a visit to Washington, that he had tried to contact Macron, but that “it has not happened yet.” “We will be patient and understand your disappointment,” he said, referring to the failed submarine deal between the two countries.

Biden and Macron are trying to relax

Meanwhile, Presidents Biden and Macron agreed in a phone conversation to “in-depth consultations” between their governments, the White House and the Elysee Palace announced in a joint statement.

The two governments’ statement said the talks should “create conditions to ensure confidence” and propose “concrete measures to achieve common goals”. The summoned French ambassador to the United States, Philippe Etienne, is due to return to Washington next week.

According to American information, the foreign ministers of the two countries spoke personally on the sidelines of the United Nations General Assembly meetings last Wednesday. Then Biden and Macron want to meet face to face in Europe at the end of October. At the end of October, the G20 summit will take place in the Italian capital of Rome, before the COP26 climate conference kicks off in Glasgow, Scotland.

The submarine dispute led to a deep rift between the two historically allied countries. The United States of America, Great Britain and Australia announced an Indo-Pacific alliance last week, which also includes the joint construction of nuclear submarines for Australia.

Because Australia then violated a long-planned submarine deal with France worth billions of dollars, Paris was deeply upset. The French government called the failure of the deal a “treason” and temporarily recalled its ambassadors from Washington and Canberra.

Australia had complained that working with Naval Group, which is partly owned by the French state, was years behind schedule and budget.

In 2016, Canberra signed a contract to purchase 12 diesel-powered submarines. The deal has been dubbed the “Decade of the Century” and was valued at A$50 billion. The contract was later revalued at 56 billion euros.

According to the French Ministry of Defense, the Naval Group has already completed work worth 900 million euros on submarines. According to the department, the company did not incur any losses because the work was covered by Australian payments that had already been made. (AFP)