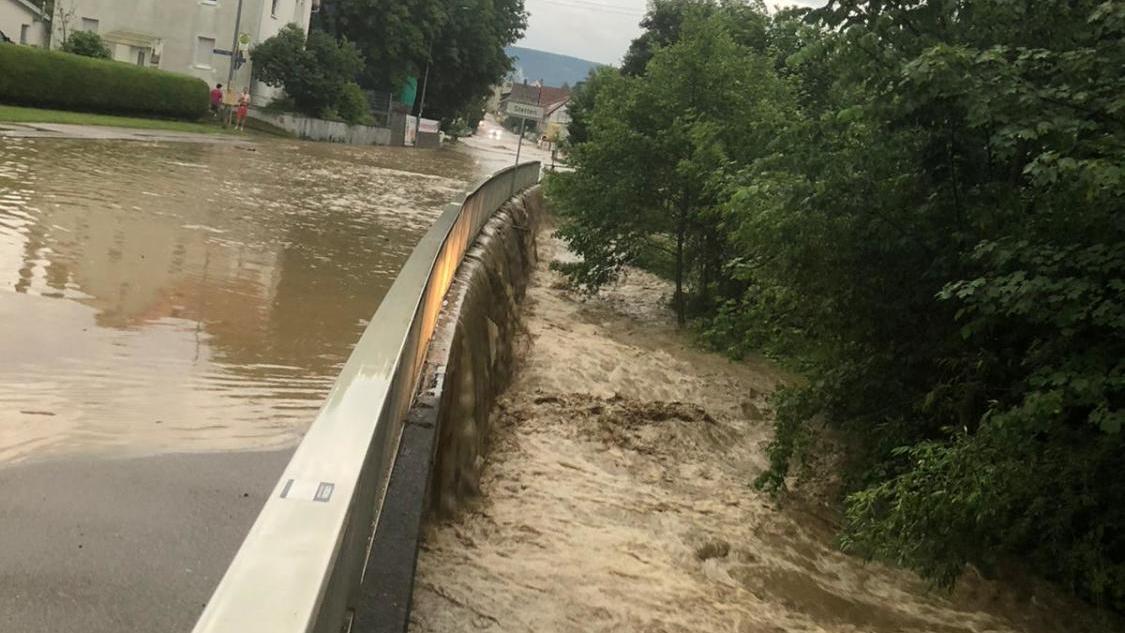 Another night with full cellars, flooded streets and hail damage: The police received several emergency calls on Monday evening. And again, the provinces of Tübingen and Rottlingen, as well as Rottweil, were hit hard by the storm.

Damage and flooding have also been reported in the Zollernalp region. In the lower town of Hechingen, the water levels in Starzel and Reichenbach have swelled dangerously.

Floods on the Falcon Bridge

The Stetten entrance at the bridge at “Falken” was flooded. Flooding has also been reported on the railway bridge at Heiligkreuz cemetery and on Feilbach near the barefoot track, where a small lake has formed on Weilheimer Straße.

The Hechingen fire brigade moved with several departments and surrounding fire brigades and reported around 8 p.m. from “about 20 locations”. Shortly after midnight, it was reported that “about 40 missions have been processed in the greater Hechingen area in the past few hours”.

To coordinate operations, a management group was set up with THW Hechingen at the fire station.

In addition, the city department also provided ground aid with three cars in the Tübingen region.

The Rangendingen fire brigade, along with the local building yard, clubs and residents, took care of security at Starzel late on Monday evening. Mayor Manfred Haug also obtained a photo on the site, as reported around 10 p.m.

Help the neighborhood with Chiemsee pumps

The Rangendingen Fire Brigade has been called in to wild assistance in the neighboring region of Tübingen while it was still operating. Rangendinger Wehr rushed to the aid of neighbors in the LF 10 and the fire service’s trailer laden with Chiemsee pumps, suction devices and generators. The main location was Jumaringen.

“How good does a quick help feel in an emergency”

The Rangendingen Fire Brigade wrote on Facebook: “We are happy to respond to the wilderness request for help. We know from experience how helpless you are in an event like this and how good you feel when someone comes to help!”

We have received reports from the Meßstetten/Obernheim district about hailstones of large size, some of which cause minor damage, for example on car roofs.

And Alpstadt was not spared the storm that swept through the entire Zollernalp region on Monday evening. According to residents’ reports, the region of Luttlingen has been particularly affected. There, within a very short period of time, a large amount of water, which carried leaves and small twigs, spilled out into the streets and caused floods.

Before the tunnel in Albstadt-Laufen on the B 463, the road was completely immersed in a depression.

A heavy rain of hail fell Monday evening, particularly over the Missestetten and Oppenheim area. Some of the hailstones were impressively large.

As of 7.30 p.m., there was no extinguishing operation, according to Messstetter Commanding General Ralph Small. However, according to reports from residents, there were minor damages, for example to the roofs of cars.

Up in Schischemtal, Rosenfeld and Geislingen, dams had to pump flooded cellars, but in the end the situation remained clear. Just like in Balingen. The streams swelled, and there were a few stones of hail, but the storm was still limited.

The neighboring region of Rottweil was particularly hard hit. And there are in particular the communities of Bösingen and Herrenzimmern. The Neue Rottweiler Zeitung (NRWZ) reports on the situation there.

The German Met Office has issued an official warning for severe weather. This warns of “heavy thunderstorms with very heavy rain, tornadoes and hail” and is in effect until Tuesday, 1 a.m.