Semester of the European Union, Presidency of Slovenia 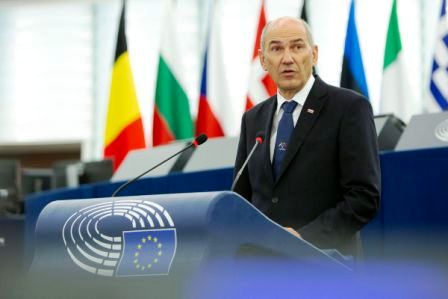 After Portugal, it is the turn of Slovenia to take over the presidency of the Council of the European Union as of 1 July 2021. This is the second time that Slovenia holds the presidency of the Council of the European Union, and the first time was in 2008. France will succeed him as of 1 January 2022. The next six to the presidency, in facilitating the recovery of the European Union and make it more resilient. On July 6, Prime Minister Janez Janša discussed the presidency program with MEPs in Strasbourg. Prior to that, Ljanica and the Slovenian government had already had the opportunity to present their program at the May 26 meeting with European Parliament President David Sassoli and leaders of political groups. Slovenia has defined its six-month EU Council Presidency program in four priority areas. Inspired by the slogan “Together. Resilient. Europe”, it will strive for the recovery and resilience of the European Union, reflecting the future of Europe, strengthening the rule of law and European values, as well as strengthening partnerships in neighboring countries and around the world.

The Slovenian presidency, with the support of the work of the High Representative for the Common Foreign and Security Policy of the Union, intends to do what is necessary to strengthen transatlantic relations. Working closely with the United States and NATO on the basis of common principles, values ​​and interests is the best guarantee to strengthen the EU’s position in the international community and to facilitate the common interests of member states. Particular attention will be paid to the countries of the Western Balkans, their European future and the reliable continuation of the EU enlargement process. We will work for the economic recovery of the countries of the region. To ensure sustainable development, we want to work with them to achieve green and digital transformation and improve connectivity within the region and with the European Union. The Slovenian presidency intends to focus its efforts on enhancing the resilience of the region, including in the field of cybernetics. A basic guiding principle of our efforts is to create a positive future for young people. To this end, a summit between the European Union and the Western Balkans will be held in Slovenia in the fall. During his presidency, Slovenia will also focus on strengthening the security of the European Union. In this context, the Schengen system is of fundamental importance. We will focus on creating a stronger, stronger and more challenging Schengen area in order to ensure its full functioning. In order to ensure more effective management of migration pressures, Slovenia will advance negotiations on a new compact on migration and asylum and strengthen the role of the European Union in the field of the external dimension of migration.

During the semester, the Slovenian presidency wants to achieve the building of a European health union. We also want to strengthen the EU’s strategic autonomy, increase its ability to ensure the availability of medicines and medical devices, and accelerate research, development and production. We support an ambitious proposal to create a new European Health Emergency Response Authority – HERA. In order to mitigate the social and economic consequences, an important priority for Slovenia will be the effective implementation of the EU Next Generation Instrument and Recovery and Resilience Mechanism, hoping in this regard for the rapid adoption of national recovery programmes. Based on the annual report of the European Commission, the Slovenian Presidency of the Council of the European Union will hold an annual dialogue on the terms of the rule of law in the EU and in individual member states.

According to President Sassoli,This morning we had a long and detailed discussion with the leaders of the political groups in Parliament about the priorities of the future Slovenian presidency. We have focused on important strategic issues, such as how to increase the EU’s resilience, how to address the ongoing health crisis, or the question of cybersecurity and the rule of law. It was a wide-ranging discussion focused on the priorities identified by the presidency. The Slovenian presidency comes at a critical time for Europe as we seek to rebuild our union after the COVID-19 pandemic“.

Romana Tomek (EPP, SI) stated: “The presidency comes at a very important strategic moment… The European Union faces many challenges, from the recovery after the Covid-19 crisis, to the green and digital transformation of the economy, such as maintaining the European social model, as well as safety issues. Our greatest responsibility, as a country that holds the Presidency of the Council, is to actively participate in these questions about the future of the European Union, and this is also an opportunity to make our voice and our views heard.“.

READ  The Bank of England warns that incomes worth £ 1,200 will be damaged after the outbreak of the independent pandemic

Tanya Fagon (S&D, SI) hopes that “The Slovenian presidency firstly supports the rule of law, secondly the European perspective of the Western Balkans and thirdly a high level of consensus in taking measures to support the economic and social recovery of the EU after the health crisis and green transition. I hope that the presidency will take the direction of reaffirming Slovenia’s position and reputation as a strong ally and supporter of a united European Union.“.

Clement Groseli (Renew, SI) has criticized some of the recent measures taken by EU governments, renewing hope that the Slovenian presidency “Follow the values ​​and principles on which the European Union is based. I would like Slovenia to be, as before, a defender and promoter of the principles and values ​​of the rule of law, freedom of the press, independence of the judiciary, as well as a country characterized by its democracy. Dialogue with non-governments and civil society“.

© Future Europe® The images used are taken from the Internet and are evaluated in the public domain: To report any inappropriate use, write to the editorial team