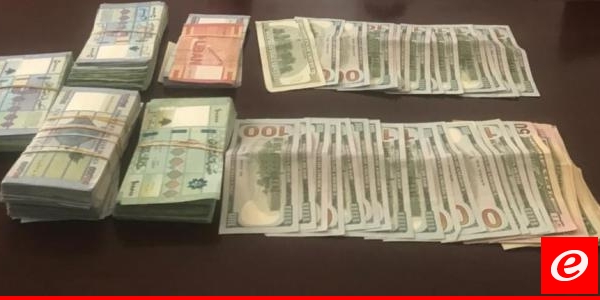 The Directorate of Orientation of the Internal Security Forces stated that “on 29/6/2021, he claimed to the Shiah faction in the citizen regional gendarmerie unit (B. B., born in 1981), that an unknown person, through fracture and dislocation, had stolen A sum of money, estimated at $4,000 and 50 million LBP, from his home in the Ain El-Remmaneh locality.

The directorate pointed out, in a statement, that “on the same date, one of the female citizens also came to the center of the aforementioned platoon and claimed that she had deposited, on a previous date, with her friend (B.B.), i.e. the first plaintiff, an amount of money, as a matter of trust. She asked him to take it back. He was procrastinating in bringing it back and making excuses, only to inform her later that his house had been robbed.

She explained that, “Based on the foregoing, the latter’s house was raided and the stolen money was seized, and (B.B) was arrested. During his investigation, he admitted that the prosecutor had handed him the money to keep in his house as a fiduciary, so he planned to seize it, so he invited her to dinner, and sent his friend: (M.J., born in 1996, Lebanese), to steal the amount from the house, by breaking and dislocation, in exchange for giving him an amount of 8 million LL to carry out the operation, then he claimed that his house had been robbed, trying to remove suspicions from him.

The security forces indicated that “(M. J.) was also arrested, and he confessed what was attributed to him. The amount was returned to the plaintiff, and the two detainees were deposited with the competent judiciary, based on his reference.”