scare people | The man was shocked when he saw the roof of the adjacent building “repairing a grave” and rushed to complain to the owner to reveal the truth: Do you think I’m crazy? -Sky Post-Family-Hot Talk 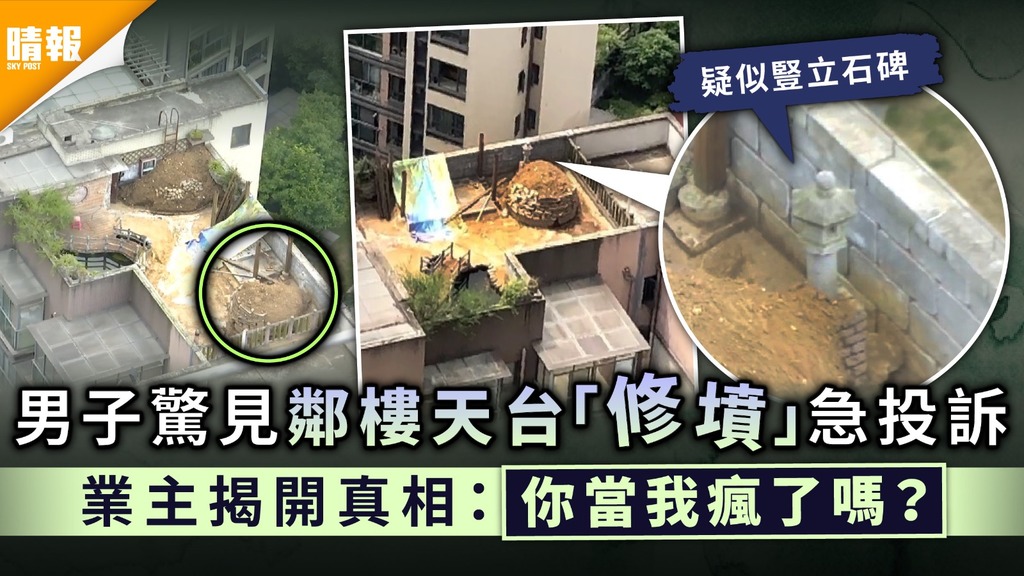 Many apartment buildings have green rooftop gardens, however, if the gardens are turned into “graves”, nearby residents may feel uncomfortable. A mainland man earlier discovered a semi-circular pile of mud and rocks on the roof of the opposite building. Upon closer examination, he realized that it was a “tomb” and a “stone slab”. He was shocked to file a complaint with the management office and inform the media, but after verification the discovery was just a false alarm. Regarding this, the business owner in question said helplessly: “You spent so much money on a house, how could it be possible to stack this kind of thing?”

According to mainland media reports, Mr. Zhang (a pseudonym) in Guiyang City, Guizhou Province, after waking up on the morning of the 22nd of last month, opened the window as usual and found that a semicircular pile of debris had suddenly appeared on the surface. from the opposite building. After careful observation, he suspected it was a grave. After taking a picture with a mobile phone and zooming in on the screen, I was surprised to see the pile of mud and rocks was not very similar to a grave, but also surrounded by stones, and it is suspected that a monument had been erected next to it.

“You shocked me, and said it was so strange, how could a tomb appear on top of a building?”

READ  Brahim Bougali, president of the new Algerian parliament - Arabs and the world - the Arab world

Mr. Zhang immediately complained to the management office and told the local media about the incident, and the photos he took spread on the Internet, causing heated talk.

The next day, a reporter went to the scene for an interview and watched from a distance on the roof of the building in which Mr. Zhang lived. There was already a semi-circular pile of mud and rocks on the roof of the opposite building, which was suspected to be a shrine, then he went to the community property office to find out the truth. Office staff stated that after receiving the complaint, they contacted the owner of the unit in question and inspected the site, and confirmed that the pile of debris was not a cemetery, but a building used as a waterproofing project.

“The owner said her house is leaking, and some debris and dirt that is used for waterproofing has accumulated.”

The employer said with a smile: misunderstanding

With the help of the staff, the reporter contacted Ms. Yang, the owner of the unit in question. The other party revealed that she had just bought the house. There was a rooftop garden, but there was a leak. So the workers were asked to come fix it, remove the dirt and stack it aside, but it looked similar to a tomb. She smiled and said that she had not expected such a great misunderstanding,

“Just look at it for yourself! Besides, am I crazy? Spend so much money on a house. I have a brain disease for this? How can I stack this kind of thing?”

Later, Ms. Yang asked reporters to go to the scene to directly attack the situation and found that the “tomb” was made of messy mud, bricks and stones. There was a hole at the bottom of the pile of mud and rocks. It can be seen that the inside is hollow and there is water. The “stone monument” erected next to it is actually a device that the previous owner used to protect the wire switch.

Ms. Yang also noted that after the completion of the rooftop waterproofing project, she will re-pave the soil to eliminate unnecessary misunderstandings.

Programs for the U Lifestyle app are recorded in the “U TV” area!
↓↓ Try to play, taste and try the videos to watch ↓↓
【Experiment now】