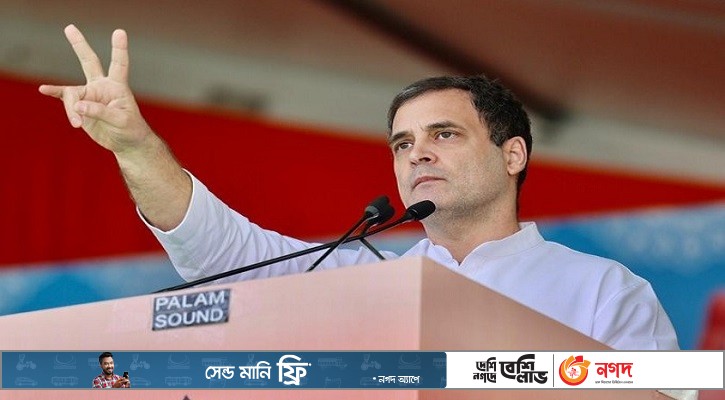 Dhaka: Rahul Gandhi, the former head of India’s main opposition party, Congress, said Hindus should be brought to power by expelling Hindutva activists. He is a Hindu who respects all religions.

On Sunday (December 12) the Congress rallied against the Modi government in Jaipur, Rajasthan, over the issue of inflation. Rahul made that comment there. Interim President of Congress Sonia Gandhi, Secretary-General Priyanka Gandhi, Rahul Gandhi and other leaders in Congress also participated in the rally to curb inflation.

At the rally, Rahul Gandhi said there is a clash of two words in the country. One word is “Hindu” and the other is “Hindutva”. No two words can have the same meaning. Each word has a different meaning. Two words conflict in the country’s politics today. One word ‘Hindu’, another word ‘Hindu’, are not the same thing. These are two different words, each with different meanings. There is a difference between Mahatma Gandhi being Hindu and Godse being Hindu. Gandhi spent his whole life searching for the truth and finally a Hindutva shot him in the chest. A Hindutva lover spends his entire life searching for power. He is ready to do anything for power. His path leads to power.

Rahul Gandhi said Mahatma Gandhi said I want the truth, I am looking for it, I do not want power. Hindus have ruled since 2014, not Hindus. Hindu rule must be imposed by expelling these Hindus. He is a Hindu who respects all religions.

See also  "It's like falling in love": Israeli businessmen welcomed into Dubai

Meanwhile, head of the Bar Council of the Muslim Union Council Asaduddin, criticizing Rahul Gandhi’s remarks, said that Rahul and the Congress had paved the way for Hindutva. The Hindu coming to power in 2021 is a secular agenda. excellent! India belongs to all Indians. Hindus are not alone. Representative Asad El Din Y.K. India is for people of all faiths who do not believe in any religion.

Any news, information, photos, photographs, graphics, videos or audio content published/published by banglanews24.com may not be used without prior permission under copyright law.