Protests are raging in Myanmar to reject the military coup 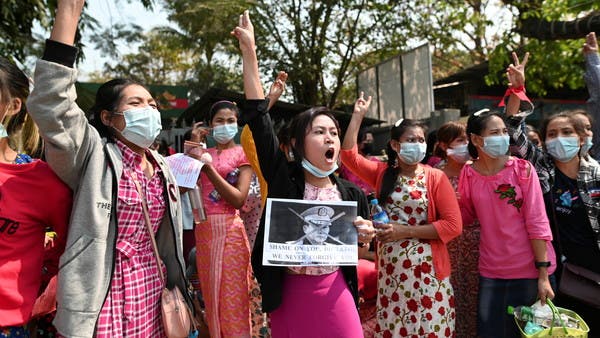 Tens of thousands of people marched across Myanmar today, Sunday, to denounce last week’s coup and to demand the release of elected leader Aung San Suu Kyi, in the largest protests since the 2007 Saffron Revolution, which played a role in pushing the transition to democracy.

Thousands gathered in Rangoon, on Sunday, to protest against The coup in MyanmarThe internet shutdown failed to quell anger over the army’s takeover of power from elected leader Aung San Suu Kyi. This is the second day in a row from Demonstrations in the largest city in Myanmar.

People protest in a street against the military coup in Myanmar

Many of the protesters wore red, the color of the logo of Suu Kyi’s National League for Democracy party.

“We will go ahead and continue to demand until we have democracy. Let the military dictatorship fall,” said Miu Win (37 years), one of the demonstrators.

People protest in a street against the military coup in Myanmar

Other demonstrators carried banners reading “We do not want a military dictatorship.”

Police vehicles were deployed at the place near Rangoon University, and there were also riot police.

“Military dictatorship has been rooted in our country for a long time. We must stand against it,” a protester named Myat Sui Kyaw (27 years old) told AFP.

The Ministry of Transport and Communications informed telecommunications companies, in a notice, that access to the social networking site had been blocked until midnight on February 7th. The notice stated that this site contributes to destabilizing the country.

READ  Biden says "America is back" at the top of the table - but is that a good thing? | Foreign Policy of the United States

In the absence of internet services and the lack of official information, rumors spread about the fate of Suki and members of the government. Her lawyer quickly dismissed talk of her release that prompted huge crowds to take to the streets to celebrate Saturday.

Suki, 75, is charged with illegally importing six radios and police are holding her under investigation until February 15. Her lawyer said he was not allowed to see her.