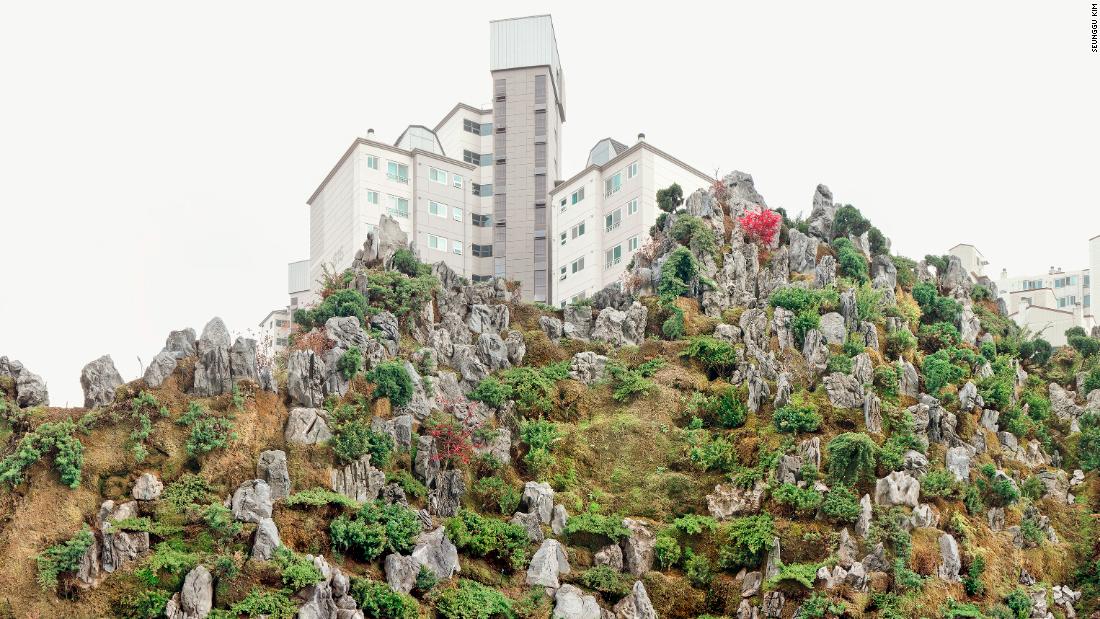 Plush green pines are densely planted on rocky hills outside an elevated apartment block in Seoul. They are reminiscent of the famous Dodamsambong peaks of South Korea, but are only a fraction of the size.

This beautification trend, known as “jingyeong sansu,” seeks to restore the country’s most famous mountains – and to a much lesser extent – beyond luxury residential complexes and private villas.

Artificial mountains are built by real estate builders in hopes of improving feng shui – and the market value of buildings. Some residents also believe that they bring the healing power of nature to their doors.

Photographer from Seoul Seunggu Kim he has captured these unconventional structures since 2011. At the time, he toured about 30 apartment complexes equipped with magnificent rock gardens and tree-covered hills.

The rocky structure is similar to South Korea’s famous Dodamsambong peaks, but they are only a fraction of the size. Credit: Seunggu Kim

Spending her twenties working on construction sites, Kim was often among the first people to witness the months-long process of reproducing the most famous lands in the mountains.

Workers first build a basic styrofoam mold that is attached to or around the apartment block, he said. They then cover it with soil, before planting flowers and trees.

The structures are often accompanied by engravings describing the positive energy that each mountain considers to bring, from fertility and the pursuit of peace of mind.

South Korean photographer Seunggu Kim has been capturing the artificial mountains of Seoul for almost a decade. Scroll through the gallery to see more of his pictures. Credit: Seunggu Kim

“I realized that this is not just an artificial landscape, but a new environment that combines tradition and philosophy,” Kim said in a phone interview. “It’s interesting to see how capitalist it has become.”

The extravagant price of mountains – up to two million dollars for a design up to 20 meters, means – are usually found in luxury apartments. Only high-quality materials are used, including expensive rocks and bonsai, and each mountain is maintained by a team of experts.

The mountains cover about 70% of the Korean Peninsula and are an integral part of Korean identity. The mythical story of the founding of Korea begins in the Taebaek mountain range.

According to Korean legend, Hwan-ung descended from the sky and was approached by a bear who wanted to be a woman. Hwan-ung told the bear to eat garlic and herbs for 100 days in the cave. It worked, and the bear later married Hwan-ung and gave birth to Dangun, who founded the kingdom in 2333 BC.

Although many consider the legend to be a myth, North Korean archaeologists claimed to have found Dangun’s tomb at the foot of Mount Taebaek, near the North Korean capital Pyongyang, and built a mausoleum there. in 1994 to honor him.

Today, mountains on both sides of the border between North and South Korea are believed to bring happiness and wealth. Both countries celebrate the founding of Korea – the day the heavens opened to Hwan-ung – on October 3 each year.

“There is a positive and shamanistic belief in the mountains in Korea, so it’s like squeezing it and bringing it back to a city that lacks nature,” Kim said. “My job is to discover Korean landscapes that still exist in modern society today.”

Some of the more popular designs are Mount Seorak, in the Taebaek mountain range of Gangwon Province, and Halla, Jeju Island, the highest mountain in the country.

Mount Kumgang in North Korea is also popular, as tourists from South Korea have not been able to visit the real thing since 2008, due to political tensions.

The popularity of artificial landscapes suggests that residents are trying to strengthen the connection with nature after decades of rapid urbanization. Curator Haeni Park, an attempt to reconnect Kim wants to achieve with her photographs.

“Kim’s work reveals her understanding of the reality of our society, where people living in cities that can be quite gloomy actually take comfort, at least for a moment, from colorful man-made structures,” she wrote in her curator statement for Kim’s 2015 exhibition “Landscape List”.

For Kim, this simulacrum of nature comes as a surprise, given the topographic constraints in the country.

“South Korea has developed a compressed culture of rejection, as we have a relatively good amount of resources, but there is not enough time and space to spend them (“), Kim said. “(False Mountains) represent an alternative landscape that city dwellers had to accept.”

Kim photographed the same structures for many years to observe seasonal changes in their shape and color. Initially, he considered the “kitsch” landscape design to be one of the symptoms of South Korea’s rapid economic growth. “Since then, it has become appreciated by the beauty of the mountains and the“ healing ”effect they have,” he said.

“Sometimes when I’m outside photographing fake hills, old residents approach me and explain the significance of the mountain with so much pride, as if they are real and own it,” the photographer recalled. “I found that sense of ownership very unique.”

Kim said people today had to find alternative ways to enjoy nature and relax. He calls it “current culture,” and that is the broader theme of his lifelong attempt to capture how South Korean urban planners cope with “a relentless desire to find joy in the most difficult times”.

His second series about life in South Korean cities features images of citizens trying to cling to their leisure spaces – no matter what else happens – such as a man walking a dog next to a flooded park and swimming a crowded congregation pool in the middle of Seoul.

Kim sees herself as an observer or cameraman, not as an artist. He hopes his photographs offer a realistic picture of South Korea’s capitalist society.

“I want to reveal the identity of modern Korea – an ironic, optimistic and joyful Korean society and its distorted consumer culture.”