Oberliga: The USA goalkeeper wants to be a professional in Germany 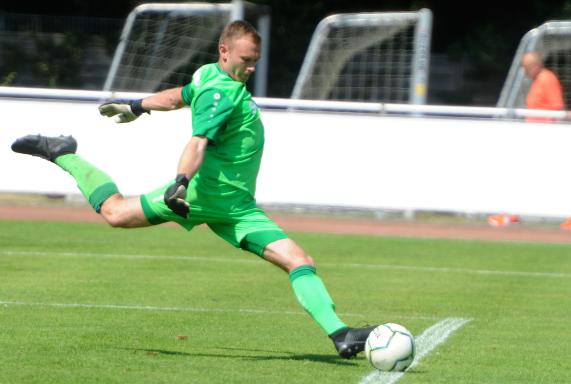 TSV Meerbusch football club has an American in Kenneth Hersey on the team. The 27-year-old goalkeeper wants to become a professional in the future.

Kenneth Christopher Hersey, nicknamed KC, is a Clarksville-born goalkeeper. The goalkeeper now lives in Germany and plays in the upper division of the Lower Rhine TSV Meerbusch. In 2018, the 27-year-old turned into a Jan Heisfeld TV – It was .’s first stop Hersey In his new home in Germany. The responsive 1.82m goalkeeper has been on contract with Meerbusch since this season. In the future, the American pursues professional football and has ambitious goals

RevierSport has with Kenneth “KC” Hersey (27) talked about his departure from the United States, the reasons for his transfer to Germany, and his future goals.

My big goal is to develop myself to become a professional. If I had the choice, I would prefer Germany, but other countries would also be attractive.

Reasons for leaving his homeland: “I was 23 when I officially left the United States and have been in Spain for six months. I have seen a lot of the world through football. It was something I had always wanted. I am about two and a half years now in Germany and I am fine, my wife and I live here. with our dog.

Stations before moving to Germany and the incentive: “I was with Chelsea for a little while when I was younger. Then I moved to the Mexican club Pachuca, where I played for university. Then I got a degree in biochemistry in college. Then my real football journey began. In Spain, they played in Marbella and Malaga for about six months And they played well there. Unfortunately, there was a change of coach and the new team decided to form different goalkeepers. That’s why I didn’t get an offer and without the club I got the contact details from Ralph Schiessel.

He told me that I could come to Germany to train with him. Ralph prepared me well and I was at my best. He is an excellent goalkeeper coach. At first, Ralph did almost everything for me and helped me a lot, as well as in organizational matters. Mainly because I couldn’t speak German at the time. So, in general, I came to Germany because of Ralph and my dream in football. ”

Quality at TSV Meerbusch: “The quality of the team is great. The boys really want to do that and training is always fun. The first few matches were tough, but we’re going to score a lot of points this season, I’m sure of that. The quality is there, but we just have to find our rhythm. I think I can improve and improve a lot in Meerbusch and I are looking forward to the rest of the season.”

Future goals and dreams: “My big goal is to develop myself more, to become a professional. If I had the choice, I would have preferred Germany, but also abroad would be attractive. I would also like to be able to speak German fluently. Outside of football, I can continue to study for a degree Masters in Chemistry. I just have to decide what I want to study. Either in chemistry or in software development. But my biggest dream is to eventually play football professionally.”