Negotiating for another 18 million vials 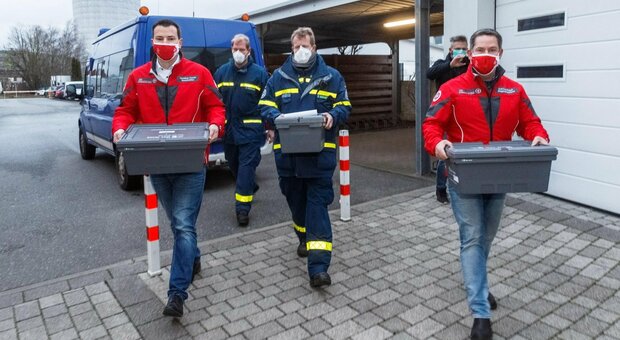 The goal: to bring more vaccines from Moderna and Pfizer-BioNTech to Italy, totaling 18 million doses. Negotiations are underway, also involving the European Commission, always bearing in mind that our country is entitled to a share of 13.46 percent of purchases. In other words: Italy and Europe are trying to obtain larger quantities of the US vaccines (in fact, Pfizer-BioNTech is also involved with a German company).

Also read the vaccine, the doses distributed according to the population of countries

Race
Let’s see in more detail. Moderna Italia promised 1.3 million doses in the first quarter, 4.7 in the second, and 4.7 in the third, for a total of 10.7. With an increase of nearly 50 percent, another 5 million have been added. It is not easy, because Moderna, the US company, has had economic support from the Trump administration, and thus has a privileged relationship with the United States. With Biden inaugurating, the dialogue appears less problematic. It must be said that so far the moderna vaccine, which has already been verified by the FDA (the US authority), has not received the green light from Ema (the European agency). Yet yes is almost taken for granted, given the outcome of the FDA investigation, so much so that the EMA meeting on Moderna was submitted to January 4, in a week. This vaccine uses the new messenger RNA technology, but does not require a cold chain like Pfizer-BioNTech. And it’s not a trivial matter: yesterday in Germany, some regions of Upper Franconia had to stop vaccination precisely because the alarm went off because conservation at minus 70 degrees was not guaranteed.

However, the search for new supplies from Italy is also becoming more urgent in light of the showdown that rebounded yesterday over the first supplies sent to the European Union countries: 9,750 doses for Italy and 150,000 for Germany. How is that possible? On Saturday, the Ministry of Health denied the discrepancy, arguing that there was confusion because the pace of supply was simply changing, to the point that 470,000 new doses would actually arrive in Italy in these hours. Yesterday, Commissioner Domenico Arcuri repeated: There is no violation of the agreement between European countries that bought all vaccines from different suppliers together. “On Vax Day, Germany got 11,000 doses. The 150,000 that were delivered are part of the subsequent supplies that will arrive in our country from December 28. There is no discrimination. The task was done at EU level regarding percentage of population, both for Vax day and for subsequent supplies at full operation. Our distribution plan is to get 450,000 doses per week starting tomorrow. And they will arrive directly to the places of administration ». In short: Pfizer Trucks will return in these hours and deliver to 20 hubs in all regions. But an average of 450-470,000 doses per week is certainly not enough in a country of 60 million people. This is why the bid for the “50 percent extra” is also underway with Pfizer-BioNTech.

In this case, given that the current agreement includes 27 million vials, the goal is to have another 13-14 million. So, in the best case scenario, by adding the extra volumes of Moderna and Pfizer together, we’d arrive at a boost of 18 million doses. It won’t be easy, because the search for a vaccine has now started all over the world. There is another front.

Beyond the sleeves
In the UK, the British authority could, already this week (there are those who plan until today), to approve the AstraZeneca vaccine, which was developed by the University of Oxford in cooperation with the Italian Irbm. The mass vaccination in the United Kingdom with doses of AstraZeneca, in the case of green light, will begin next Monday, in parallel with the one that has already started with Pfizer. The move could embarrass Europe, given that large quantities of the British-Swedish multinational have purchased 40 million doses for Italy alone. Yesterday AstraZeneca confirmed that the product is 95 percent effective and therefore comparable to Moderne and Pfizer. However, experts clarified that during the experiment there were some problems that required further investigation. This slowed down the response of the exponential moving average that could be announced in the second half of January. Nothing is taken for granted.

READ  National Taco Deals 2020: Where to go for free tacos and other specials