Mr. Bourita presents at the Paris conference the royal approach to resolving the Libyan crisis 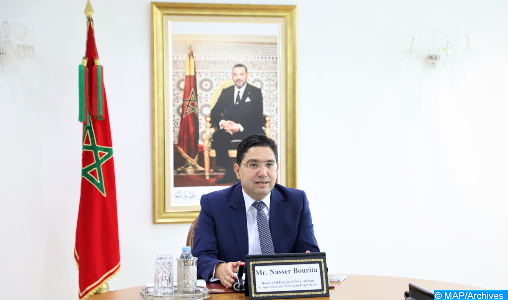 Paris – Minister of Foreign Affairs, African Cooperation and Moroccans Abroad, Nasser Bourita, who represents His Majesty King Mohammed VI at the Paris Conference on Libya, presented the royal approach to resolving the Libyan crisis and His Majesty’s desire to make Morocco a state. Welcoming the land for dialogue between Libyans.

Mr. Bourita told the participants in this conference, which was held on Friday, under the co-chairmanship of French President Emmanuel Macron, German Chancellor Angela Merkel, Italian Council President Mario Draghi, as well as the President of the Libyan Presidential Council. The exile, whose Majesty King Mohammed VI closely follows developments in Libya and frames Morocco’s commitment to his royal vision, which has never wavered.

He pointed out that this approach, based on respect for the Libyan will and the prohibition of all paternity, enabled significant progress to be achieved, which began with the conclusion of the Skhirat political agreement in December 2015.

The Minister indicated that the Bouznika arrangements on October 6, 2020 enabled the progress towards the reunification of the seven sovereign positions, which facilitated the Libyan parliamentary meeting on November 23, 2020, for the first time since 2011, of 123 Libyan parliamentarians from east and west, and recently, the views of MPs converged The House of Representatives and the High Council of State on Rabat’s commitment in December 2020 to hold elections on the scheduled date in December. 24, 2021.

Mr. Bourita called on the participants in this conference to come out with strong and clear messages directed to Libya and the international community. He also called on Libya to commit to a better future to preserve the progress made, stressing that the elections can transform a ceasefire into a lasting peace and resolve the issue of legitimacy once and for all.

See also  More than 1,000 current and former CDC employees have criticized Trump's response to the coronavirus

And the minister did not fail to stress, in this context, the need to ensure that the legislative framework for elections in Libya is “consensual” and “inclusive,” adding that these elections will enhance Libya’s sovereignty and allow the international community to have a single Libyan interlocutor.

After clearly expressing the Kingdom of Morocco’s support for the government’s actions by Abdelhamid Dabaiba, the Minister indicated Morocco’s readiness to support any agreement between the Libyans.

Morocco is ready to support whatever the Libyans agree to. This is what the Libyan brothers know very well.” Mr. Bourita stressed the need to change the role of the international community and the role of Libya’s partners.

Mr. Bourita emphasized that “Morocco – which has been a land of dialogue for which the Libyan brothers automatically converge – always regrets that Libya is for some a ‘diplomatic business fund’, and for others, an arena of proxy struggle”. To take it is to accompany a united Libya – without advocates and without interference – to: create conditions for a lasting peace, including the disarmament of foreign mercenaries and the reintegration of local militias; Keeping up with Libya on the path of consolidating peace and strengthening the institutions of the rule of law. and helping Libya rebuild itself, thanks to its own resources and investments managed by Libyans themselves.”

In conclusion, Mr. Bourita noted Morocco’s support for the efforts of UN Secretary-General Antonio Guterres and his Personal Envoy, Jan Kubis, to consolidate peace in Libya.

It should be noted that the objective of the Paris conference is to provide international support for the continuation of the political transition that has begun and for the holding of elections according to the established timetable.