Mockery of a statue of Soleimani .. You did with it what the Americans did not do 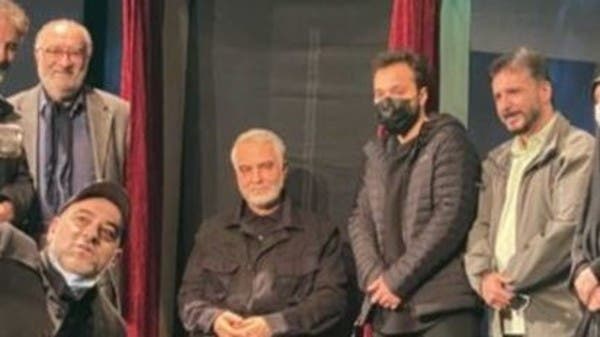 Another wax statue of the former commander of the Quds Force of the Iranian Revolutionary Guard, Qassem Soleimani, was recently unveiled in Tehran, at a star removal ceremony, in which government figures and artists participated.

The Soleimani family participated in the event, which was held in the Milad Tower in the Iranian capital. The ceremony began with a video clip showing Soleimani’s history, followed by his political speeches, as well as a music video of the singer, Amir Arjmand, according to Iranian media.

Pictures from the event showed family members and officials standing next to the statue and kissing it, while some of the participants stopped to take a selfie with the wax statue.

In line with its quest to restore its legitimacy through the image of Qassem Soleimani, the Iranian regime tonight placed another statue of itself, this time in the Milad Tower in Tehran. pic.twitter.com/nYII6i5Ddu

The statue, which was unveiled, joins a series of statues and other tributes to the murdered Iranian leader placed by groups loyal to Iran in some countries, most notably Lebanon and Iraq, all of which have been subjected to criticism and public condemnation, for what was described as “Iranian domination.”

Lebanese activists have published comments and photos on the communication sites showing the models of Soleimani. “Even the United States could not do what the sculptor who made this statue did with Soleimani,” a satirical tweet said.

As a result of the uproar that accompanied the unveiling of the statue, due to its poor manufacture, the authorities rushed to raise it, while the mayor of the district, Nematollah Hussein Zadeh, promised to take measures to amend it before putting it in place again.

This was not the first time that the Soleimani statues aroused the ridicule of observers, as another statue unveiled last March in Kilan County was subjected to a torrent of criticism and ridicule because it was “very bad.”

Soleimani was killed in the Iraqi capital, Baghdad, last year, after his plane landed from Syria and Lebanon, and Abu Mahdi al-Muhandis, one of the most prominent militia leaders in Iraq, was also killed with him.

Sculptures of Qassem Soleimani and or Mahdi Al-Muhandis in Iraq

A model of Soleimani in Lebanon