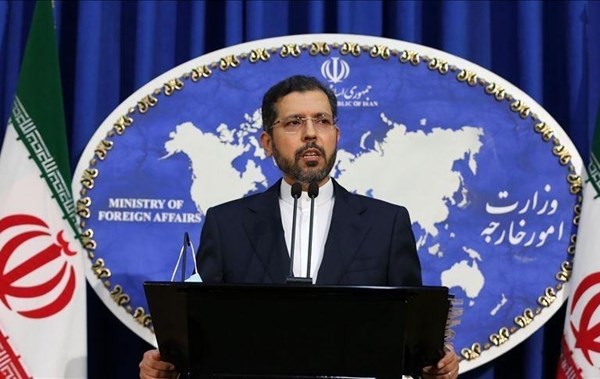 Commenting on the recent maneuvers in the Red Sea, a spokesman for the Iranian Foreign Ministry says that “some countries are mistaken in their calculations in their dealings with Israel.”

The Iranian Foreign Ministry commented on the “Israeli maneuvers with the UAE and Bahrain”, noting that “Iran is sensitive to its own security and regional security.”

Foreign Ministry spokesman Saeed Khatibzadeh said that Iran stresses “the need to enhance stability and prevent its destabilization,” adding that “some countries are mistaken in their calculations in their dealings with the Zionist entity.”

And he stressed that “Iran is confident that everyone knows that he has to stay away from his country’s national interests.”

On November 11, the US Navy commanded A security exercise in the Red Sea Gathering “Israel” with the UAE and Bahrain, in the first training of its kind after Signing an agreement to normalize relations With “Israel”, under the administration of former President Donald Trump.

The US Navy said in a statement that “UAE, Bahraini and Israeli forces, along with the Central Command of the US Naval Forces, began conducting a multilateral exercise on maritime security operations in the Red Sea.”

Khatibzadeh addressed the ongoing talks between Iran and Saudi Arabia, and revealed that “there has been no new change in the Iranian-Saudi dialogue,” explaining that “the files that were raised in the dialogue are bilateral and regional files.”

Khatibzadeh announced on October 31 last, that “Iran and Saudi Arabia have signed preliminary agreements In between,” he explained, “we are still far from reopening the two embassies in Tehran and Riyadh.”

And the Saudi Foreign Minister, Faisal bin Farhan, said last Saturday in an interview with the French channel “France 24”, that “His country’s talks with Iran will continueAnd an additional round of negotiations is expected soon,” adding that “we have serious reservations about the Iranian nuclear negotiations, which are scheduled to resume in a few weeks.”

The Iranian Foreign Ministry spokesman also considered that “What is published about the leader of Iran’s advisors There are rumors in Syria that do not deserve a response.”