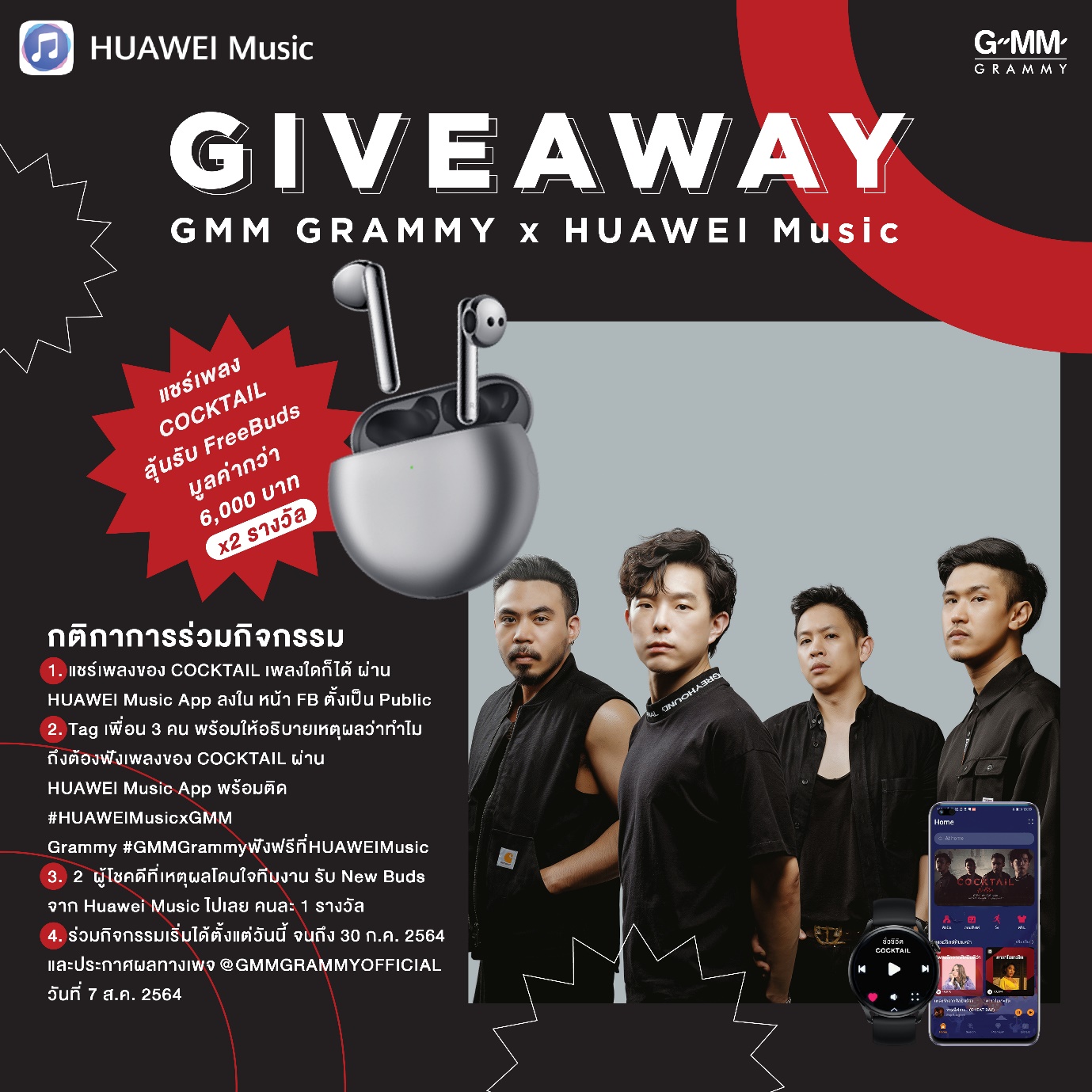 GMM Grammy is partnering with HUAWEI Music, the latest music streaming app to expand its fan base around the world. With the famous songs of GMM Grammy with a huge library of hit songs, prepare to serve new songs continuously.

When it comes to HUAWEI, one of the world’s leading technology products comes to mind. And everyone is probably familiar with it, but when it comes to HUAWEI music, it may not be familiar to you because the product only there is a first launch in Thailand, along with GMM Grammy, the record company with the most songs, which ranks first in the country , is the main camp supporting the music library on June 25, 2021.

Huawei has launched the HUAWEI Music app in more than 170 countries around the world. With a current user base of over 21 million users, aiming to open up a new experience for music lovers, HUAWEI users can download apps from HUAWEI AppGallery today. which allows users to access the full music streaming experience. With songs and playlists from GMM Grammy ready to cater to all lifestyles. Specials can be tried for free for 3 months after the trial period ends, and there will be a service fee of 129 baht per month.

In addition, HUAWEI Music can be used on a variety of HUAWEI devices, including smartphones, tablets, headphones, TVs, or even smart watches. It can be said that it is a complete ecosystem. In addition to the devices that can be connected, HUAWEI music can also be connected to other applications, HUAWEI music also comes with different sound systems to choose from, whether it is an audio system Listen 3D Equalizer which will adjust the sound to make it more distant. It will simulate the audio in a selectable 3D format. What direction do you want the sound to come from, and there are so many different sound effects to choose from? In addition, there is also a Party mode that pairs HUAWEI mobiles using HUAWEI Music together to be able to play the same song at the same time to increase the loudness of the speaker. For both smartphones too

“For HUAWEI Music, we are committed to developing products and services. For users to experience HUAWEI mobile entertainment through HUAWEI Music, which it has begun to release to the Thai people and has been in use since last July, with key partner GMM Grammy, the country’s leading record label, to help in providing the ultimate entertainment for all listeners.” said Mr. Shin Shan, Director of APAC HUAWEI Consumer Cloud Service

This handshake is called a remarkable collaboration of a record company with a music library. And most of the country’s artists like GMM Grammy and pioneer in cutting edge music technology like HUAWEI Music are ready to be enjoyed by all users with differently display music and playlist to make listening to music in HUAWEI Music app special Unlike before, now HUAWEI Music and GMM Grammy are organizing gift event . Just share songs from GMM Grammy artists through the HUAWEI Music app, and you can win prizes, the new headphones, HUAWEI FreeBuds 4 from HUAWEI. Let’s go. you can do it. you can do it. Join the action from today until 30 July 64. Interested parties can follow for more information and news. or other activities of

Photo – https://mma.prnewswire.com/media/1578527/image_5006539_36385892.jpg
Caption – GMM Grammy is partnering with HUAWEI Music, the latest music streaming app, to expand its fan base around the world. With the famous songs of GMM Grammy with a huge library of hit songs, prepare to serve new songs continuously.