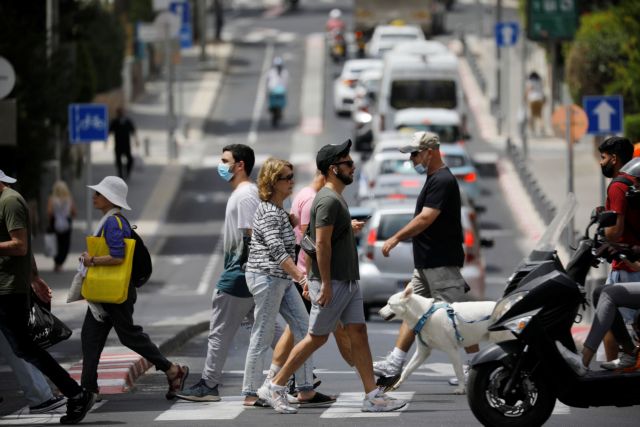 Israel today announced the resumption of the use of compulsory masks in enclosed public spaces, after a surge in the number of new coronavirus cases in that country where more than half of its population received two doses of the COVID-19 vaccine.

“Due to the increase in cases, the Ministry of Health announced that from today noon (12:00 Greek time), it will be mandatory to use a mask in all enclosed spaces, except for homes,” the ministry said in a statement. statement.

Authorities have also advised Israelis to wear masks to large outdoor gatherings, “for example at Gay Pride rallies this weekend,” the ministry said, referring to a gathering in Tel Aviv this afternoon, which is expected to be attended by thousands of people.

The same source explained that children under the age of seven, people with disabilities and those who play sports are exempt from the obligation to wear masks indoors.

Israeli Prime Minister Naftali Bennett warned on Wednesday that if more than 100 new cases of coronavirus were recorded daily for a week, mask use would become mandatory again.

On Wednesday, Israel announced the postponement of opening its territory to tourists “due to fears of a possible spread of the delta type.”

In January, when the epidemic was at its peak in the country, about 10,000 cases were reported per day in Israel, ahead of a massive vaccination campaign to reduce infection.

READ  For to start with time, world data one million coronavirus scenarios in 100 hours: Reuters tally

Since then, more than 5 million of Israel’s 9.3 million residents (55% of the population) have received two doses of the COVID-19 vaccine.

A total of more than 840,000 cases of novel coronavirus have been recorded since the outbreak of the epidemic in Israel and 6,428 deaths from COVID-19.