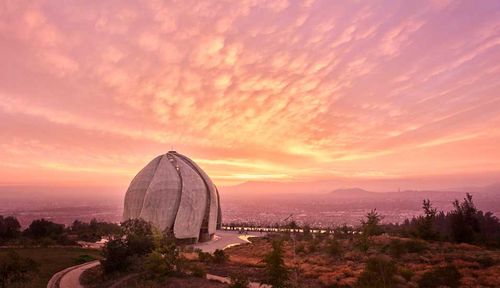 On calendars listing international and multicultural festivals and celebrations, you can find this year “International Day of Religion” on January 17th. It was first announced in December 1949 by the National Spiritual Association of the Baha’i Community in the United States to express the Baha’i belief in the inner unity of religions and to promote mutual acquaintance between followers of different religions. World Day of Religion, which was first celebrated on January 15, 1950, has been observed outside the United States on the third Sunday in January and has also received some attention outside of the Baha’i religious community for some time.

The Baha’i Faith arose in the second half of the nineteenth century, and took its name from the Arabic expression Bahá’u’lláh (“the glory of God”), the honorary title of its founder, Mirza Husayn Ali Nuri (1817-1892). Based on the views of Shiite Islam, Tehran-born Mirza Husayn Ali has promoted the idea of ​​gradual divine revelation since 1866: Just as the Holy Book has prepared the Qur’an, the Qur’an must also be understood as a preparation for this recently published revelation as a gate (“the Gate” Or “the gate”) symbolized by the Persian Mister Ali Muhammad. He was executed in 1850 two years later, in the presence of the heir to the throne of the ruling dynasty, and had described himself as the hidden imam or Mahdi expected by the Shiites, claiming thus the only spiritual and secular force in the country.

After his expulsion from Iran, Bahá’u’lláh spent the last two and a half decades of his life in the Ottoman city of Acre (in Israel today). There are many writings written in both Persian and Arabic, where he, among other things, propagated the unity of all people with the simultaneous recognition of their cultural differences, the unity of religions and their compatibility with reason and science in addition to establishing a world court of arbitration to promote world peace. . Around the world, the Bahai faith is now governed by the “Supreme House of Justice”, a nine-member body based in Haifa, Israel.

From a religious-historical perspective, the Bahá’í view of other religions is part of a two-thousand-year tradition that can be found above all in the context of monotheistic religions. Early Christian understanding of Christianity as the fulfillment of an ancient divine promise to Judaism, the self-image of the late ancient religious founder Mani as the ideal figure for Zoroastrianism, Buddhism, and Christianity, or the idea that Muhammad is the “seal of the prophets” with the Qur’an as a final transcendence of the Bible and the Torah.

Similar developments, repeatedly observed on this basis since the early modern era, are akin to the ideas of Bahá’u’lláh. Let us remember only the human concept of prisca theology, or the “ancient theology” that God once revealed to people and which must now be fruitful again in the present, or thought associated with a permanent or “eternal” philosophy. Philosophy, ”according to which certain eternal and immutable truths have been preserved over thousands of years and can be found again and again in the most diverse cultures. The“ typical ”interpretation of the Bible can also be expanded with its understanding of promise and fulfillment to history outside the Bible, it was already known from Before the late ancient Church writers who saw the Greek singer Orpheus as equivalent to the biblical King David.Even in modern times, this method has been encountered among others among the so-called official-French Jesuits who wrote in the late seventeenth and early eighteenth centuries Christian Truths in China To find classics sic.

As a central component of the new religion, a similar reference to ancient religious traditions and modes of interpretation can be found not only in Bahá’u’lláh, but also in the Founders of the Theosophical Society, who were quite different in 1875 with reference to the actual or supposed similarity in the religions. Cultures spread the unity of all religions. The quasi-religious features finally emerged through the efforts of some participants in the so-called “International Parliament of Religions” who met in Chicago in 1893 as part of the Great World Exposition marking the 400th anniversary of the discovery of America. The fact that “comparative religious studies” is also beginning to establish itself as an academic discipline – initially in a mainly Protestant environment – shows the interest shown by large circles in the era of secularism and the relativization of supposedly irrefutable religious truths offers a comparative study of religions.

If “International Day of Religion” has spread to the Baha’i faith outside the United States in the past seventy years and has recently been adopted repeatedly outside of this religious community, it may be due to the fact that an anxious person has become increasingly aware of the potential for interfaith conflict, particularly in decades The last few, and tries to counter that in a symbolic way. Nevertheless, the invitation to look beyond one’s nose to other religions, to reduce communication concerns and appreciate constructive dialogues, would be welcome even if one is unable to share the theological introductions of the splendor of God and his followers.