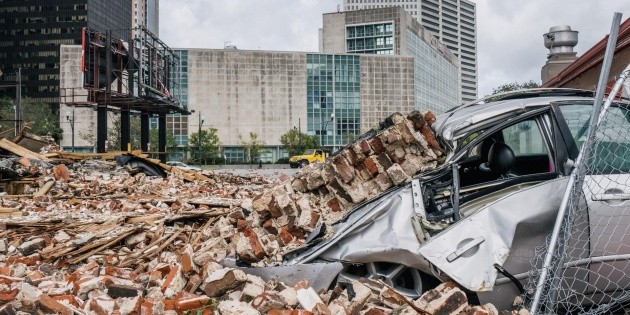 Tropical Storm Ida downgraded Monday to a tropical depression over Mississippi in the United States, after hitting Louisiana as a strong Category 4 hurricane this weekend, although threats of heavy rain, flooding and flooding persist.

In its post at 16:00 local time (21:00 GMT), the US National Hurricane Center (NHC) said the current tropical depression is moving north-northeast at 15 kilometers per hour.

The Maximum sustainable wind From the meteorite descended to 55 km/hTherefore, all tropical storm and storm surge warnings have been deactivated, the observatory said.

At the time its epicenter was located about 35 kilometers northwest of Jackson, Mississippi.

According to the track’s forecast, the axis of this system will move further inland over central and northeastern Mississippi on Monday night. will move through Tennessee Valley Tuesday and close to Central Appalachian Mountains on Wednesday.

For now, the National Health Commission said, “there are no coastal surveillance or warnings in place.”

Today, the Louisiana and Mississippi authorities began assessing the damage in the area after the passage of “Eda”, where More than a million customers It remains without a power source in the first state and another 126 thousand in Mississippi, as detailed Monday by specialist Poweroutage.us.

New Orleans was the hardest hit And it was completely in the dark, relying solely on electric generators, according to power company Entergy Louisiana.

The company pointed to “catastrophic transportation damage” that affected the eight power transmission lines in that city, which on Sunday called with Ida the arrival of the deadly Hurricane “Katrina” 16 years ago, on the same date only. .

The “Ida” system was one of the most powerful systems to make landfall in US history, according to Louisiana Governor John Bel Edwards,

It made landfall twice in an isolated area of ​​southern Louisiana with 150 mph winds and held that category 4 strength for several hours to dump the torrential rain that left severe flooding.

Governor Edwards has asked the community to stay indoors while assessing the damage, warning that it is It is dangerous to move in the affected areas.

On the other hand, the NHC also reported that another system, “Kate,” has reduced its wind strength even though it’s still a tropical storm over open waters in the mid-Atlantic.

At 5:00 p.m. local time (9:00 p.m. GMT), its epicenter was located about 1,295 kilometers east-northeast of the Leeward Islands, and it would be moving across the mid-Atlantic, for the time being without threats to Earth.

Kate has a maximum wind speed of 65 kph, with stronger gusts, and is moving northwest at 17 kph.

Forecasters expect this movement to continue into Tuesday, followed by a turn to the northwest on Tuesday or Wednesday night.

If you are interested in this news and want to know more, download and discover it INFORMAPlusEL INFORMADOR digital app, where we have exclusive content, selected by our editors, to give readers a more complete experience.

Download the app and try it for free for thirty days.