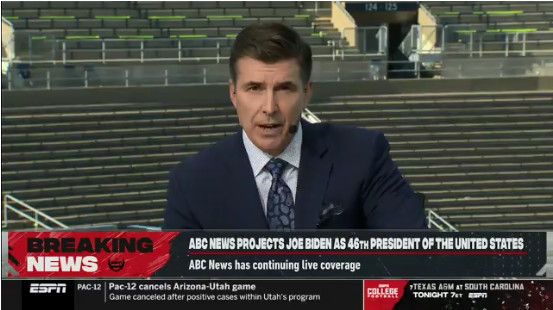 Tuesday was election day in America, but it took until Saturday for most of the major news organizations to officially announce the victory of Joe Biden and the next president of the United States. There are very few ads these days that just necessitate every TV station separating from their current programming to participate but this was definitely one of them. Given the timing on Saturday morning, this meant that a bunch of sports shows ended on ESPN and Fox had to take a back seat for the official word to come out.

Averted the crisis? Both CNN and MSNBC have called for the elections, but Fox and IBC have not yet done so and are broadcasting the matches. https://t.co/sSnYwS8456

On ESPN, the announcement came midway through College GameDay. Rece Davis is tasked with breaking up with the ongoing discussion to share an update via ABC’s News Bureau.

Shame we couldn’t get Lee Corso to wear Giant Biden’s head, but we do understand the need to belittle us here.

Over Fox’s Big Noon Kickoff, it was a really weird setting with the entire regular crew off work to deal with the COVID quarantine. As for the alternate crew, Terry Bradshaw, Howie Long, Emmanuel Acko and host Carissa Thompson they sent their broadcasts away to Fox News … not only was there a strange difference between the switch, there was an equally strange banter between the hosts as we all waited. .

Hey, it’s a weird time, we’ll give them something about it.

READ  Darkness and Bones, Netflix will be a "romantic and terrifying" journey