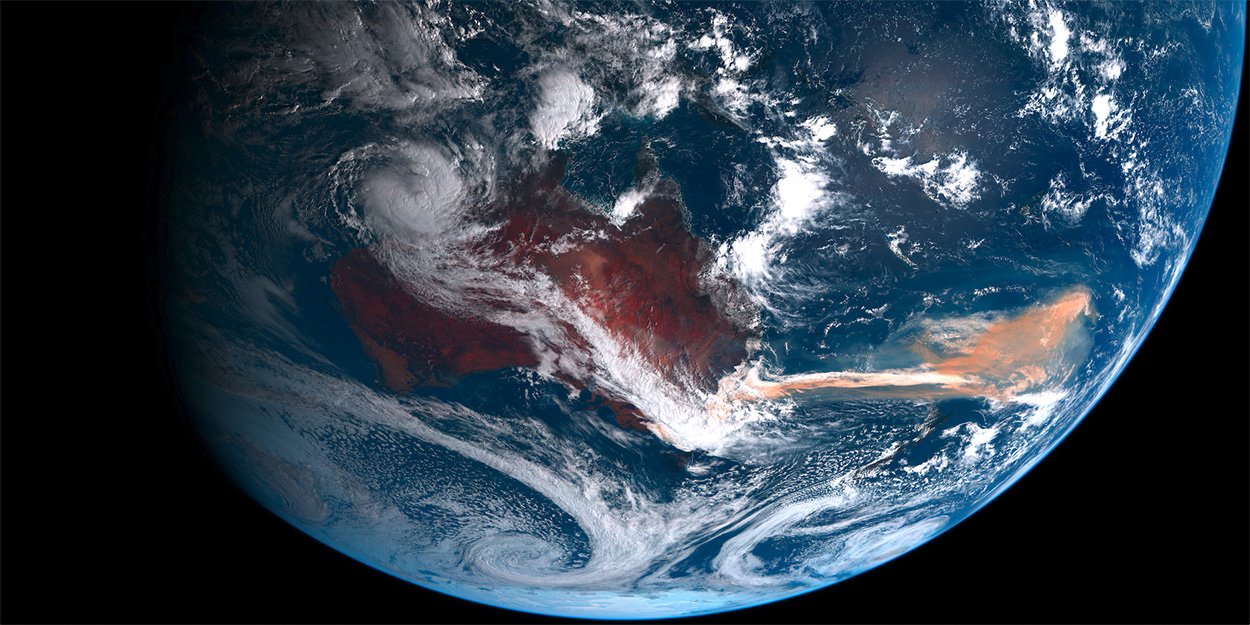 The horrific bushfires in Australia in the summer of 2019/2020 have devastated millions of hectares of forest and bushland. Thousands of kilometers away, smoke and suspended matter from these fires turned out to be carriers of life: they promoted an unprecedented bloom of algae in the Southern Ocean, the area of ​​which clearly exceeded the size of Australia, according to satellite data. to watch. The reason for this is the enriching effect of fire aerosols: the iron in smoke is an important plant nutrient and is usually only scarce in the Southern Ocean. The iron fertilization caused by the fire compensated for this deficiency and enabled an unprecedented algal bloom.

It is normal for bushfires to break out in Australia during the hot summer months. But in the summer of 2019/2020, the fires reached dramatic proportions. As early as October, thus before the actual fire season begins, fires begin to burn, especially along the east coast of the continent. Fires spread in the ensuing months, driven by intense heat, prolonged drought, and high winds. “Millions of hectares of vegetation have been burned, with serious environmental, social and economic consequences,” says Wei Tang of Duke University in Durham and colleagues. It is estimated that nearly three billion animals died or were displaced as a result of the fires and smoke from the fires, which rose into the stratosphere, and released 715 million tons of carbon dioxide – far more than the annual human carbon dioxide emissions in Australia, which in 2018 was about 537 million tons of carbon dioxide.

Soot and smoke over thousands of kilometers

The smoke from wildfires spread over thousands of kilometers by wind and covered large areas of the South Pacific and the South Ocean. With these clouds of smoke, huge amounts of soot, suspended matter and aerosols were also released into the atmosphere. This is where Tang and colleagues’ study comes in. It was known from previous studies that such aerosols also contain many trace elements such as iron, which are important phytonutrients. Especially in the cold, nutrient-poor marine regions of the South Pacific and Southern Oceans, iron deficiency is usually what limits algal growth in the upper water layers. “There was already a previous hypothesis that sinking aerosols over the sea could compensate for this nutrient deficiency and increase marine productivity – but to date there has been a lack of direct monitoring data on this,” the researchers wrote.

For their study, Tang and his team evaluated satellite measurement data on the spread of smoke and aerosols in the summer of 2019/2020 and determined phytoplankton density in different parts of the Southern Ocean using additional data from satellites. In addition, they used measurement data from buoys, which allowed to draw conclusions about how much suspended matter fell to the surface of the sea. The assessments showed that bushfire emissions from southern and eastern Australia were moved thousands of kilometers in a southeasterly direction by the prevailing winds within a few days and were distributed over a large area between latitudes 20 and 55 south. In two marine regions south of Australia’s southern coast and southeast of the continent, soot and aerosol concentrations have reached historically unprecedented levels, the team reports. Soot concentrations there were at least 300 percent above normal climatic values.

See also  Criticism in Hall: FC Frohlinde will be an old man

This had consequences: An abnormally strong algal bloom developed in these marine areas, which began in October 2019 and subsequently continued for more than four months, according to satellite-based chlorophyll measurements. “The surprising thing is that this increase in phytoplankton occurred at a time in the Australian summer when there is usually a seasonal decrease in chlorophyll in these marine areas,” Tang and colleagues report. Because at this time, iron reserves in the upper waters of the Southern Ocean are already being used by algae. “The area where chlorophyll concentrations were well above the historical monthly maximum was more than ten trillion square meters and thus exceeded the size of Australia,” the team writes. “The extent of phytoplankton blooms caused by the Australian fires is unprecedented in satellite data.”

According to the researchers, these findings provide strong evidence that smoked aerosols, especially the iron in smoke, can act as iron fertilizer for the surrounding oceans. In contrast, the algal growth that is promoted by this means that phytoplankton absorb and bind more carbon dioxide from the air through photosynthesis than is usually the case. According to scientists’ calculations, algal blooms caused by wildfires in 2019/2020 could have led to an additional uptake of about 186 million tons of carbon in the form of carbon dioxide. “This corresponds to about 95 percent of carbon emissions from wildfires in the summer of 2019/2020,” Tang and his team wrote. However, it is unclear how much of the carbon that was absorbed and stored in the algal tissues reached the deeper ocean layers and thus was withdrawn from the long-term carbon cycle. They assert: “It is also possible that the extra carbon did not reach the deeper layers, so the sequestration of CO2 was only short-lived.”

Given climate change and its increasing impacts on wildfires and bushfires worldwide, the researchers see their findings as an important indication that the consequences of large fires could be more far-reaching than previously considered in models. “These fires show us an unexpected and previously underestimated impact of climate change on the marine environment – with potential reactions also to our global climate,” Tang says.