Ingolstadt: a space for professions and ideas – co-working in the region 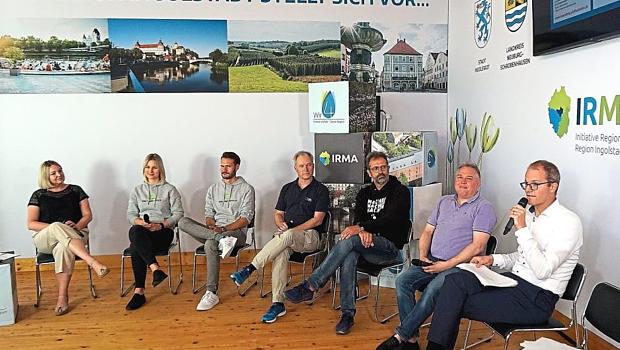 They are used by various professional groups such as freelancers, innovators, start-ups, and more often than not, companies that want to give their employees more freedom to develop innovatively. Everything can be, and nothing should be, is the motto. Networking and joint brainstorming can also arise in such a community – even the next potential startup or joint venture for which coworkers meet.

What is already well established in major capitals like Berlin is now poised to conquer the rural areas as well. Regionally in Eichstätt, Neuburg an der Donau and Pfaffenhofen, where co-working spaces are created. But also in Ingolstadt, where for some time now there is with a digital startup center, such an offer, which will continue to thrive as it soon moves to the Cavalier Dalwijk.

What does co-working mean and what opportunities does it offer? These were questions a discussion group was now looking at at the area pavilion at the State Horticultural Fair. Karina Schofner and Thomas Hirsch of Octown Office Eichstatt, Helge Heinemann of Das Auto in Neuburg, Franz Glatz, Managing Director of Brykec, Markus Kasser of Eckland Working in Pfaffenhofen, and Iris Eberl, Head of the Regional Management Initiative (IRMA). The event was moderated by Thorsten Stark, head of the local editorial office Donau Courier in Neuburg. Hans-Peter Sander of “CoWorkLand” Ammersee Denkerhaus in Dießen provided a guest contribution.

She said creating fertile ground for start-ups is an argument in favor of joint action. But filling vacancies is also an idea that the people of Newburgh had.

In the lecture, the talk was about the third place, which is, in addition to the workplace and the place of life, a new social place in everyday (professional) life. One vision was that co-working spaces could be networked with village shops in the countryside and thus developed into a new village centre. Economically profitable operation is one aspect, but – which emerged from the tour – this also depends on the circumstances involved. Otto, for example, is a non-profit association that might one day aim for “black zero,” they said. But the investments must also be made. The crowdfunding project was said to have started in Pfaffenhofen. In Eichstätt, it was reported that the property owner had participated in the investment.

In general, the differences between joint work in the state and in the city are rather small. This relates to the duration of use, which is usually longer lasting in rural areas. However, professional fields are diverse: in rural and urban areas, co-working spaces are used by bankers, developers, and engineers, but also graphic designers, consultants, students, and even young people and retirees for their projects. People like authors and cabaret artists are also desirable in Pfaffenhofen. One view said that joint action could help strengthen the rural area. This would create an incentive for young people to keep them in the area. It’s about “keeping up with the big city,” as it was called. DK