Fire activity and the extinction of herbivores with a detrimental effect 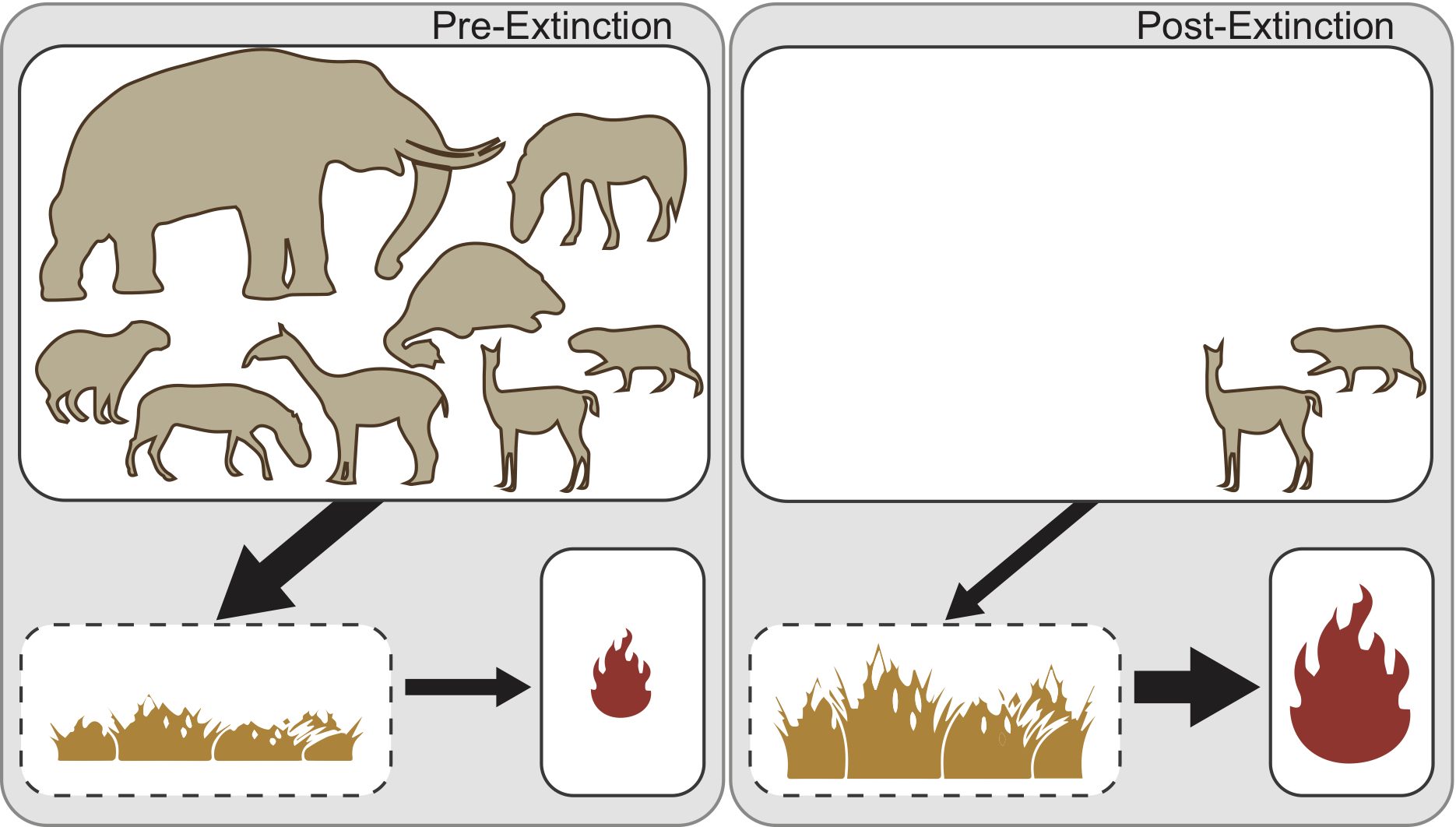 By looking at prehistoric developments, researchers explained the far-reaching importance of herbivores to fire activity: the extinction of these animals in the period between 50,000 and 7,000 years ago led to an increase in fires in the world’s grasslands, according to their analyses. The greater the losses in the area, the more fires caught there. The scientists say the findings suggest that the environmental impact of grazing should be better taken into account when assessing global fire activity in the past, present and future.

Huge areas of land are marked by vegetation that repeatedly dries up. A small spark is enough to start fires that eventually burn entire swaths of land to ashes. This is a natural process of great importance at least in part: it shapes the species diversity of ecosystems and the release of climate-related gases, and thus also has effects across geological timescales. In order to understand the importance of fires, it is important to know their causes and the factors for their recurrence. It seems clear that climate plays a major role – drought, for example, can greatly increase the likelihood of fires. But the activity of herbivores can also play an important role: they limit fire activity by eating plant matter that would otherwise be fuel.

On the impact of fire protection effect for shepherds

This relationship has already been documented in some ecosystems. At the local level, it is becoming clear that the disappearance of the herbivores will lead to more frequent and stronger fires in the corresponding ecosystems. However, researchers led by Carla Staver of Yale University in New Haven now want to check whether this role is also being reversed broadly and temporarily. To do this, they take an analytical look at developments that occurred about 50,000 to 7,000 years ago.

See also  "Bring the truth back to the briefing room."

Late in this Quaternary epoch, some of the world’s grassland ecosystems are known to have undergone severe extinction among the larger herbivores. The researchers addressed the question of the extent to which these losses are reflected in the development of fire activity in these areas. To do this, they evaluated information from databases and studies that provided information about the extent of extinctions in certain regions of the world. They were then able to compare these results with the results of research on ancient fire activities based on investigations of ash traces in sediment layers.

As they report, data analyzes initially showed: In South America there were the largest losses among herbivores during the study period: 83 percent of all species died there, followed by North America with 68 percent and Australia at 44 percent. As the researchers point out, there is also evidence that extinction events mean not only the loss of species, but also a general decrease in the biomass that lives on the grass. The research also confirmed the well-known fact that animals in Africa were relatively spared from extinction: only 22 percent of the herbivorous species disappeared there during the study period.

Comparison of the data with the results of the analysis of ancient fire activities in the respective regions showed the following: The frequency of fires increased more where the extinction was more pronounced among representatives of herbivores. South America ranked first, followed by North America. However, in Australia, the frequency of fires increased slightly, and in Africa, scientists found evidence of a slight decrease during the study period. The bottom line from the findings is that the loss of grazing animals is reflected in changes in fire activity at the continental level, the scientists summarize.

This work demonstrates how important grass-eating animals are in starting fires. We must pay close attention to these interactions if we want to predict future fire patterns,” says Staver. This is especially important against the background of changes in herbivore communities in many grassland ecosystems: due to the influence of humans, the numbers of grass-eating wild animals are dwindling in many places. To date, however, this has not been generally considered in large-scale fire models.” Our results emphasize the need to include herbivore control in our understanding of fire activity and explicitly in fire models. This could help compensate for discrepancies between observations and typical scenarios of fire activity in grasslands,” the researchers wrote.