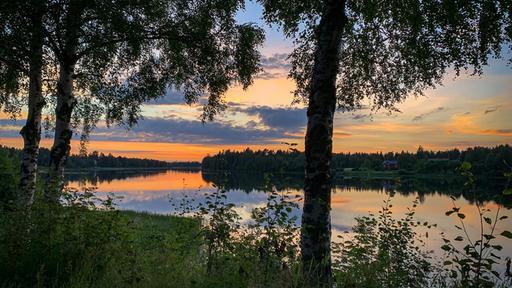 II – This is the name of a small town in northwestern Finland that is great in one thing: climate protection. They have been striving for sustainability for years. What can the rest of the world learn from II?

We are in Finland: first round the sauna, then on to the Cold River. “It’s so refreshing,” says Leena Vuotovesi from the city’s climate protection agency. “And when you’re in the water, it feels a lot like you are part of nature.” “We live in the midst of nature. So we can enjoy the water here, pick berries and hunt, grow food, have this beautiful forest, nature as a whole – that’s very important to us here in II.”

The second – this is the name of the place. Double characters only, and they can be controlled here in northwest Finland. Two streets, two supermarkets, nearly ten thousand people. But Ii is perhaps the greenest place in Europe. The city has reduced its carbon dioxide emissions by 80 percent. “It became clear to us in II that climate change is not only coming, but it is already there,” says Vuotovesi. “And we understood that not only the big players in the world have to act, but we also have to do something ourselves. So we thought about where to start.”

One key to success: creating incentives. Because everyone in II should participate in climate protection. Young people should be educated about climate protection in kindergartens and schools. With the little things in life: saving electricity, saving water, recycling constantly.

“It all started with the 50:50 project,” says Vuotovesi. “We tried it in three schools. There, children measure their electricity and water consumption and take back half of the savings. Then they can decide for themselves what they spend the money on. The model was so successful that we applied it to everyone. Schools and kindergartens have expanded at level two.”

In Ii, electricity consumption has been cut in half over the past ten years. The kids bought pretty things from their savings: plants, toys, even a pool table.

They also want to enable children to experience nature at an early stage. “When you go out into nature, you also learn to appreciate nature,” says kindergarten director Kirsti Kehus. “Then they don’t want to harm or harm it, nor do they want to destroy it. We think that if we take care of nature together, then nature will also take care of us in the end.”

Today the kindergarten group goes to the forest to collect berries. Nature’s experience should remove fear of climate change from young people. “A lot of young people go to demonstrations these days,” says Photovici. “They worry about their future. But we just have to show young people the tools of commerce. If children grow up feeling they can do something to protect the climate, and that they can make a difference, then I think we can have fun and have a confident company.”

II is surrounded by wonderful nature. Some of the largest peat bogs in Europe can be found here. For centuries, peat has been burned to produce energy. Swamps store huge amounts of climate-damaging carbon dioxide. Protecting them will reduce greenhouse gas emissions into the air. Businessman Yuha Hulkko from Ii bought and remodeled large tracts of peat bog. “Change is only possible if individuals or families do what they can. A small thing or something bigger. This is where the change comes from.”

Ii has some of the tallest wind turbines in Scandinavia. What pollutes the air – for example heating oil – has been banned in the city. The second is based on wind and water. The small town now produces ten times more green energy than it needs. With the sale, Ii takes close to four million euros per year.

There are no easy solutions

Tigo Leeds is the President of City Council. “Leeds says wind power is part of the solution and part of the problem, and there is a lot of discussion about wind energy. For example, about noise and distorting landscapes and how wind farms can disturb people’s interaction, ”Vuotovesi agrees. “We can’t simply say: Since there is so much wind here, we are filling the community with wind turbines. It is important to find solutions with people exactly where we can build wind turbines. “

The courage to try new things reinforced the collaboration in II. Also because the city takes people’s concerns very seriously.

Another 60 wind turbines are planned. All over a real forest. No tree has been cut down here in 100 years.

The forest’s owner Juha Väätäjä has invited climate protector Vuotovesi and city councilor Liedes to visit him. “You cannot overlook a wind turbine,” Väätäjä worries. “They will be 300 meters high and only a few hundred meters from here. That is why I suggested that we move the facility a bit.”

“We have a common goal,” says Vuotovesi. “Specifically to protect nature in II. We need wind power. But we also have to watch the surrounding area. It’s like a puzzle.” Ultimately, you have to put all of the parts together and find the best compromise.

Climate protection – the big mystery. What can a small village achieve with such a global problem? Much more can be found in II. For example, lead by example. Because what’s happening here, in the Finnish province, might be something similar all over the world.

This and more “Mirror of the world– You will see the contributions on Sunday August 30, 2020 7:20 PM local time first.