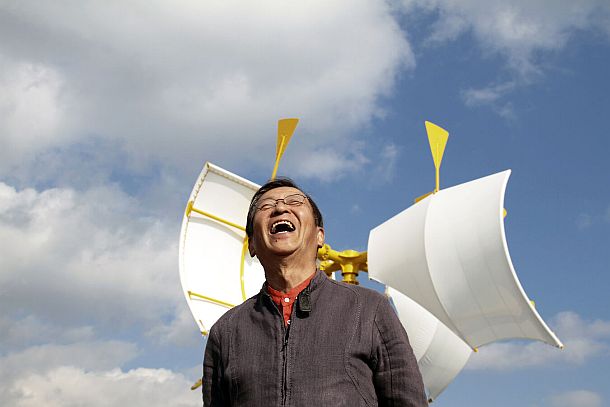 Breathing the Earth: Japanese artist Susumu Shingu creates kinetic creatures that are brought to life by the wind. They turn and sway in the wind like his role models in the woods and rice fields. His dream village winds.

Breathing the Earth: A Dialogue with Nature

Kinetic-moving-art objects, propelled by air, rotate inside each other, around their axis, together with other moving parts. Susumu Shingus sway like leaves on a tree, all at different speeds and in different directions. Single joints, sheet metal, triangles, rectangles – smooth or curved – of different lengths.
Air movements are only visible when the wind hits an object. It has a captivating effect as a game with water. Then the metal discs rotate and reflect the pool and reflect the light.

Where the mirrors flash

Mirrors move wonderfully between the glass blocks of skyscrapers. Somewhere there is the hinge that makes odd triangles, rectangles, and arcs vibrate. They turn in all directions – up, down, right and left, somersaults and dance turns. They reflect light on themselves or on the glass blocks of tall buildings. It comes back from different sides elsewhere. Mirror dance is unpredictable, but depends on air movements.

His dream is a village that lives on the wind alone and generates energy. The earth breathes in abundance from the wind, and its absolute elixir of life. It should include a theater, a café, flowers and a botanical garden for self-sufficiency.
In this mission, he flies around the world in search of the highlight of his Breathing Earth project.
The ruins of Italy, blown hard by the wind, seem ideal to him. There is space for four windmills and a theater in the inner courtyard. With a puff of thistle seed, he happily allows air to flow around his nose. As always, speaking to the officials, it turns out that the art connoisseurs are very enthusiastic; Decision makers have concerns. restaurant? No, no competition!

Another black, flat landscape of coal mines. It looks futuristic like a lunar landscape. There is no place for cars here.
There is a lot of wind in Scotland, but there is also a lot of rain. The art historian is passionate about the idea and model of the village. In fact, the diameter of the restaurant is 30 meters. From afar it looks like a large mushroom with a thick base, the canopy of which is perforated on the sides. These are the windows.

Until now, the village has existed only as a model that always stirs up storms of enthusiasm – unfortunately not among the decision-makers. Here in Scotland the project failed due to the lack of the engineer’s handwriting.
In Istanbul, he went to “Spoon Island” with the enthusiastic coordinator. Here the movie ends.
Will Susumu Shingu be able to fulfill his dream this time?

Breathing the Earth – Days, Weeks, Months In An Artist’s Life

The film shows an artist who has persistently pursued his idea for decades. Shows artwork creation, from model to wind tunnel inspection. All over the world, his art objects are moving in the wind. For Susumu Shingu, they symbolize his approach to life. He compares all sensations with the phenomena of nature – waves and wind. Pictures and objects have poetic titles. He paints his dreams on kites and shoots them in the wind, because these dreams come true!

Like artist Christo, Susumu Shingo pursues his dream of giving tangible form with his drawings and models. He also works with his wife 24 hours a day.
The film ends publicly – Susumu Shingo may have realized his dream now in a stormy place.

“When the wind blows, the earth breathes”: Japanese artist Susumu Shingo gives form to the wind through his sculptures – and has a vision of creating a village that is provided by the natural energy sources of the wind and the sun. A portrait of a contemplative nature artist and film “explodes” for a long time in the audience.

The wind – the elixir of an artist’s life