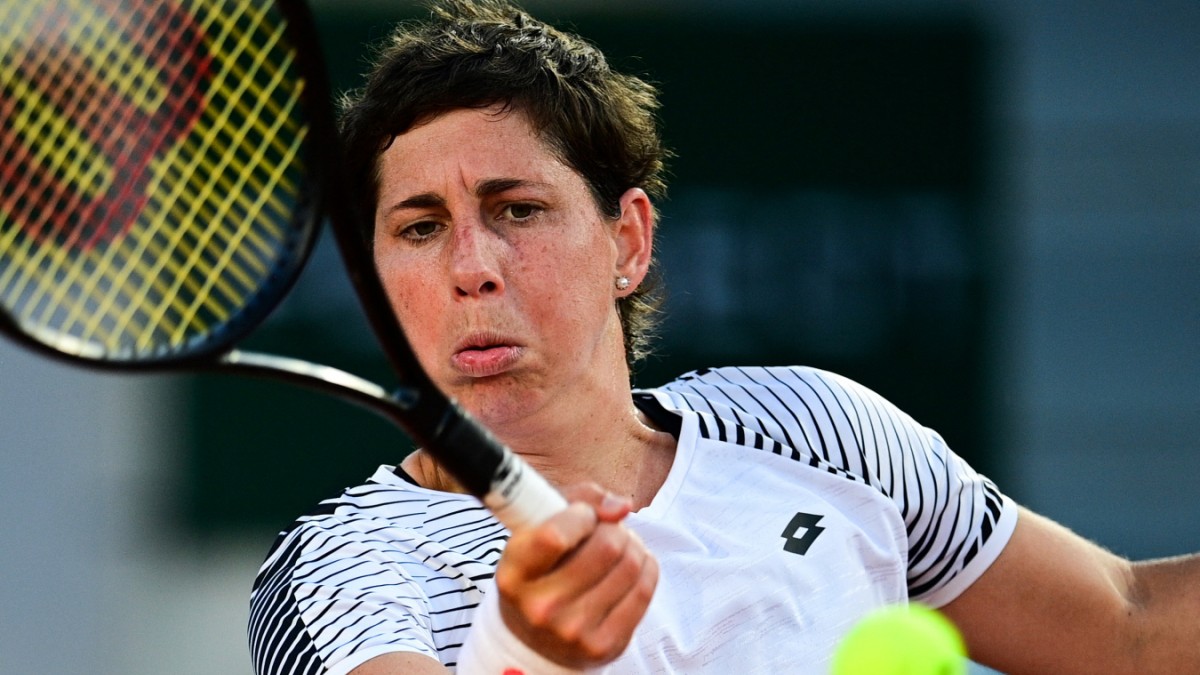 Carla Suarez Navarro is unlucky. again. But the luck wasn’t as bad as it was in Paris four weeks ago. The French Open, first round, the Spaniard has to play against Sloane Stephens, the former US Open winner from the United States. Monday’s game was scheduled as a nightly spot in the floodlights. There are still a few spectators. But they have to leave a little before 9 pm. Curfew due to the pandemic.

Nine months ago, it was hard to imagine that Suarez Navarro would play a game at Roland Garros on that first day in June 2021. Then came the diagnosis of cancer, Hodgkin lymphoma, a malignant tumor of the lymphatic system. But now that he has recovered, the professional world was actually able to admire the most beautiful backhands in women’s tennis that still existed on this fun evening. At 6:3, 5:4, Suarez Navarro worked out for the win. At 30:30 two points were missing. But she lost the match after 4-6 in the third set. No applause, no encouraging calls. Nobody is there except the referee and the regulator. I picked up the bag and crawled out of place. Her last appearance was in Paris, which has always been one of her favorite tournaments, she said later. She said she was “sad” when she saw the audience go.

After all: this time you will get the applause you deserve. At Wimbledon, she will really be able to finish her match in front of the spectators (albeit in limited numbers) on Tuesday. No matter how long it takes. Only: Ashleigh Barty will be her opponent from 1.30pm local time. Once again, the fate of the lottery was not kind to Suarez Navarro. The world number one from Australia, as defending champion Simona Halep of Romania had to call off an injury, received the honor of being able to make her first women’s match on the main stage on Tuesday. The facts at least indicate that it may be Suarez Navarro’s last appearance in the famous turf tournament.

The 32-year-old from Las Palmas de Gran Canaria had already made a plan to end her career after the US Open before falling ill last fall. “But the pandemic came first, then cancer, and then I couldn’t stop. I thought all along I wanted to go back,” Suarez Navarro said in Paris. On this occasion – she doesn’t talk much in general in the media – she emphasized how much damage he did to Stevens. She wanted to win. This exact attitude of doing everything for the job is one of the reasons Suárez Navarro has more respect on the scene than the general public.

She was a Grand Slam quarter-finalist seven times and was sixth in the world in 2016. But she was never so successful that she played for the big titles and rose to the spotlight. So she needed to be more aggressive in her game. And she has never marketed herself aggressively, like Naomi Osaka, who recently appeared on the cover of a fashion magazine. She was simply a hard-working athlete, the daughter of a handball player and a gymnast. Suarez Navarro has always been a quiet personality in tennis. This was enough for her, and this is also appreciated by her. When her diagnosis became public, many encouraged her: Rafael Nadal, Novak Djokovic, Juan Martin del Potro, football player David de Gea, basketball player Pau Gasol.

Which indicates that the most intimate anticipation of seeing a play on Tuesday came from her opponent. “It’s incredible Carla’s comeback, everyone was so happy for her,” Barty said at Wimbledon. The 25-year-old, who had psychological problems and knew what the inner struggle of a competitive athlete meant, also admired Suarez Navarro’s resilience, character and strength. “Playing the opening match on Center Court with her on Tuesday is really cool.”

The way Suarez Navarro has dealt with her illness has been remarkable. When some (mostly male) professionals didn’t taste the food during the hotel quarantine, for example before the Australian Open, there was a lot of howling on social media. On the other hand, Suárez Navarro has never complained about her share, of a completely different weight. “I immediately asked how I could recover again. What does the disease mean, and why did I get it? I didn’t ask about it. I just wanted to know what it takes to beat the cancer.” I wrote that on February 4th of this year, World Cancer Day, on the website of Eurosport In a message to their fans.

In it, she also stated that she initially thought her fatigue was linked to a possible infection with the Covid virus. After several examinations, the doctors found out that it was lymphoma. Chemotherapy lasted six months. “It’s been a long time, there were really difficult moments,” said Suarez Navarro. But she encouraged herself by telling herself: Under no circumstances should your career end in the hospital. She forced herself to think realistically and positively. After the treatment, it was like learning tennis again. I started with soft balls. 10 minutes and 20 minutes. Its intensity increases slightly every day.

She also said that her body went through a lot, and as a tennis player she can feel that. But thanks to her will, she has become so fit that she can now make an elegant farewell tour in the shadow of the truly well-known professionals. She is enjoying her latest tour in the special places of her tennis life. In the world rankings, she may have fallen to 138, but the Spanish Federation gave her respect – and even nominated her for the Olympic Games in Tokyo last weekend. It will be the fourth for her after Beijing, London and Rio. “The greatest honor for an athlete” is this nomination, Suarez Navarro wrote online, and it certainly wasn’t just an empty phrase for her.