Coronavirus accelerates from US to Brazil and Australia: Live | News 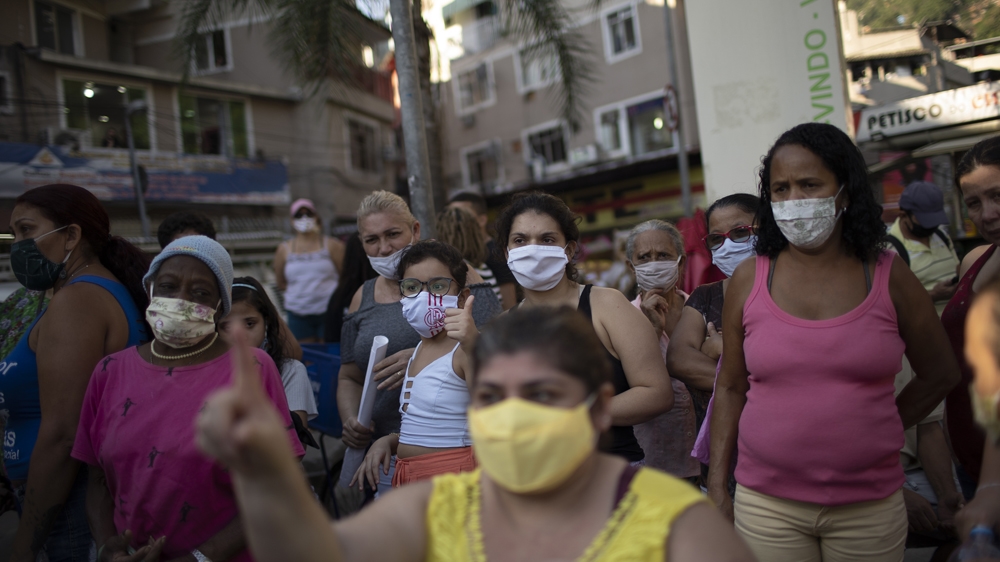 The coronavirus seems to be accelerating in countries across the world with Australia the latest to announce a record number of daily cases – 723.

The world’s two worst-affected countries – the United States and Brazil – have also reported new highs for coronavirus deaths and cases. In the US the death toll has surpassed 150,000, with Florida, California and Texas among a number of states reporting record daily fatalities.

More than 16.8 million people around the world have been diagnosed with the new coronavirus. Some 9.9 million patients have recovered, and nearly 663,000 have died, according to data from Johns Hopkins University.

Australia has reported the highest number of confirmed cases since the coronavirus pandemic began.

The state of Victoria is the worst-hit with outbreaks centred around care homes and workplaces in Melbourne and its sprawling suburbs.

“Today is not a good day,” Victoria state Premier Dan Andrews said in a statement.

He noted that while most cases in the state were in Melbourne and the suburbs there had been a “significant jump” in cases in regional communities, which warranted additional measures to curb the disease’s spread.

Mandatory mask wearing extended across the state from Sunday, and in some areas residents will not be allowed to go to other people’s houses or have visitors to their own home.

Statement from the Premier on changes in regional Victoria.

An accessible version of this statement will be available shortly at https://t.co/l9uPOBKGdq pic.twitter.com/3owwkd6Lx2

Internal borders have been closed to help curb the spread of the virus beyond Victoria. The state of Queensland in the northeast earlier announced three new cases – two of the people are thought to have been exposed to the virus in Sydney.

An Australian medical emergencies team has been deployed to Papua New Guinea where the outbreak has deteriorated in recent days.

AFP news agency says the country’s pandemic response centre was closed yesterday after a senior adviser was diagnosed with the virus, and the health minister is also being tested.

China’s top epidemiologist has been talking to state media.

He pointed to the country’s COVID-19 outbreaks – from the original source in Wuhan – to Beijing and Dalian, which have been traced to seafood markets or seafood companies.

It seems talks between United States congressional leaders and the White House on a next round of coronavirus spending have stalled as the clock ticks down on measures that banned evictions and boosted unemployment benefit payments.

Treasury Secretary Steven Mnuchin has suggested a short-term extension for those programmes, but Democrats have rejected the idea.

Al Jazeera’s William Roberts has been following the negotiations. You can read his story here.

US House Speaker Nancy Pelosi says members and staff in the House of Representatives must wear masks while the coronavirus pandemic continues.

The move came after Republican Representative Louie Gohmert, who refused to wear a mask, revealed he had tested positive for COVID-19, leading at least three of his colleagues to say they would self-quarantine.

Pelosi warned that she had the authority to ask the House sergeant at arms to remove a member from the floor for violating decorum, and “the chair views the failure to wear a mask as a serious breach of decorum.”

Members will be allowed to remove their masks when addressing the chamber.

You can read more on Gohmert’s diagnosis here.

House Speaker Nancy Pelosi has said masks must be worn in Congress and can only be removed when a member is addressing the House [File: Jonathan Ernst/Reuters]

READ  Côte d'Ivoire: Training of prescribers in the use of phytosanitary products

Guatemalan hospital officials say they’ve had to bury dozens of COVID-19 victims who have never been identified, according to AP news agency.

The agency says workers at one of the country’s largest public hospitals have begun photographing patients who arrive alone and too ill to give their personal details. Those who die without being identified are placed in body bags with transparent windows over their faces in case relatives come looking for them.

Officials says protocols to rapidly bury the dead during a pandemic only make the situation more difficult.

Emergency Medical Technicians (EMT) leave with a patient at Hialeah Hospital in Florida, one of the states with the highest number of cases and fatalities [Marco Bello/Reuters]

One person in the United States died about every minute from COVID-19 as the national death toll surpassed 150,000, the highest in the world, according to Reuters.

US coronavirus deaths are rising at their fastest rate in two months and have increased by 10,000 in the past 11 days.

China has reported 105 new coronavirus cases in the mainland, up from 101 cases a day earlier.

The National Health Commission says 96 of the new cases were confirmed in the far western region of Xinjiang, while five were in the northeastern province of Liaoning, one in Beijing, and three imported cases.

As of the end of Wednesday, mainland China had 84,165 confirmed coronavirus cases, the health authority said on Thursday. The COVID-19 death toll remained at 4,634 [Mark Schiefelbein/AP]

00:45 GMT – Vietnam outbreak that started in Danang continues to grow

Vietnam’s health ministry has reported an additional nine cases of coronavirus, as an outbreak that started in the popular tourist town of Danang continues to expand.

Reuters says some 81,000 people are now in quarantine as a result of the outbreak, which has spread to six cities and provinces in six days.

Al Jazeera’s Scott Heidler has also filed this report on the unfolding situation in Vietnam.

READ  Adidas says at least 30% of new U.S. positions will be filled by black or Latinx people

The local media in Australia is reporting that the state of Victoria, the epicentre of a new wave of coronavirus in the country, will report more than 700 cases and 13 deaths on Thursday morning.

Today’s #COVID19Vic number could be as high as 723

With a number that high (and 1 in 6 active cases in aged care sector) this could be a grim day. #Staysafe

#BREAKING: There are reports that Victoria will announce more than 700 cases of coronavirus and 13 deaths in the past 24 hours. #9News pic.twitter.com/nlt2IfPQll

Brazil’s Health Ministry has just confirmed a record of 1,595 daily deaths from coronavirus. Taken on a weekly basis (7,677 this week), deaths are also at their highest since the pandemic began.

The authorities also reported a record number of cases for a single day (69,074), partly as a result of working through a backlog of previously unregistered cases.

Despite the accelerating pandemic, the government of President Jair Bolsonaro has moved to ease restrictions to boost the economy, and on Wednesday said a ban on foreign travellers to the country would be lifted.

Commuters at a public transport hub in Sao Paolo, one of Brazil’s virus hotspots [Fernando Bizerra/EPA]

Read all the updates from yesterday (July 29) here.