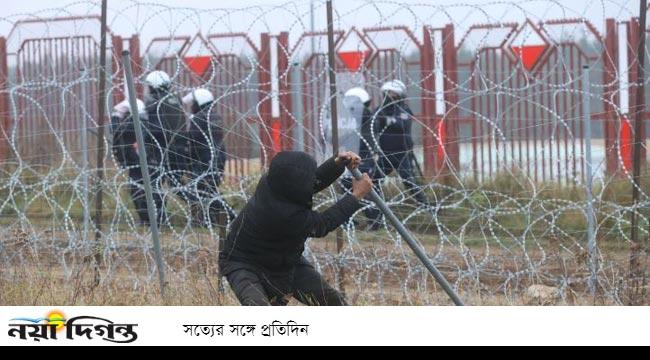 Polish border guards clash with refugees in Eastern Europe on the Belarus-Poland border. Clashes erupted between the two sides on Tuesday morning.

According to the Polish Ministry of National Defense, Polish border guards prevented refugees from entering Poland through the Kuznetsk border crossing. When the refugees threw stones at them, border guards fired water cannons and tear gas.

“The refugees attacked our forces and guards with stones and tried to break through the fence and enter Polish territory,” a statement from the Defense Ministry said.

“Our forces are trying to repel the attack by firing tear gas,” she added.

Meanwhile, Polish police say seven of their personnel were injured in clashes with refugees at the border.

Earlier in the week, there were reports of border protests for the first time from Belarus to Poland. Refugees from various countries, including Iraq and Syria, have gathered at the border between Belarus and Poland in an attempt to enter Europe.

Belarus was recently accused of trying to foment chaos by infiltrating refugees into Poland and other European Union countries.

Alexander Lukashenko, Belarus’ longest-serving president, won the election for the sixth time in August last year. It is believed that he survived an earlier attempt to overthrow him after Mr. Jiang’s intervention. The European Union has imposed sanctions on the country’s government over the allegations. Belarus is accused of trying to counter pressure on the European Union by allowing refugees into the country.

On the other hand, the European Union decided on Monday to impose new sanctions on Belarus due to its entry into Belarus.

Poland has declared a state of emergency at the border for the past few months to prevent refugees. Many refugees were pushed across the border into Belarus. According to rights groups, the refugees face problems in the political conflict between the two countries. They have to make a tent in the forest in the freezing cold. They also said that many refugees are getting sick.