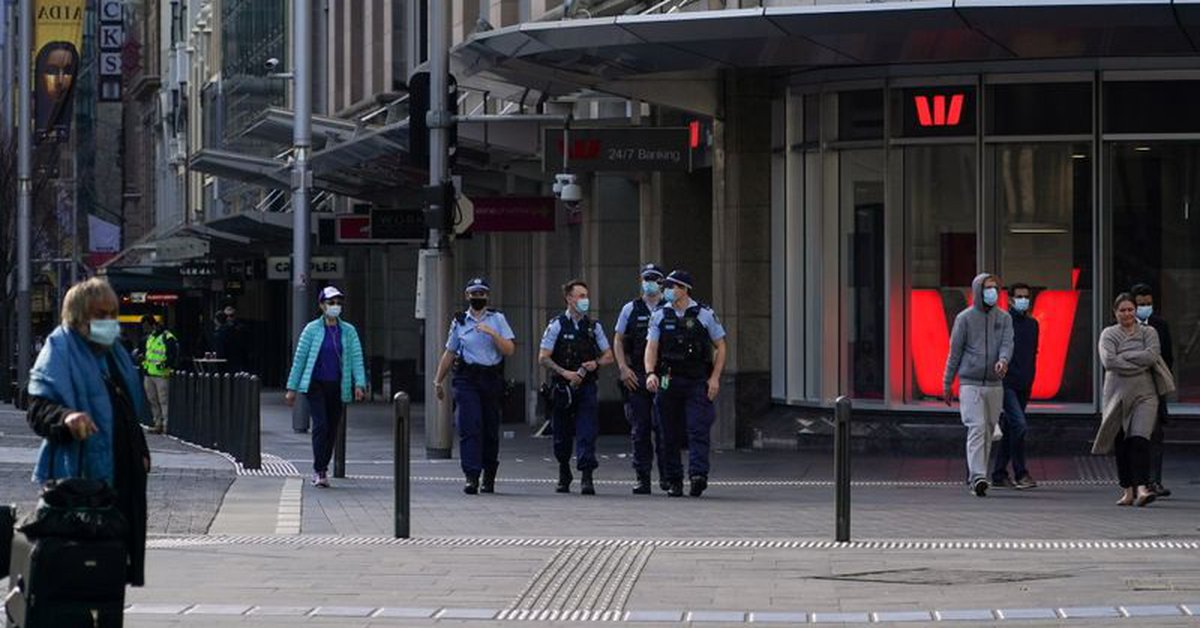 A police patrol in the city center during the lockdown to curb the spread of the coronavirus disease (COVID-19) outbreak in Sydney, Australia, July 12, 2021. (Reuters) / Lauren Elliott

SYDNEY (Reuters) – Australian authorities extended Sydney’s lockdown by at least 14 days on Wednesday, three weeks after initial restrictions failed to end the largest outbreak of the COVID-19 virus so far this year in the country’s largest city.

New South Wales Premier Gladys Berejiklian said restrictions would remain in place until at least July 30, after 97 new cases of local transmission were reported, a slight increase from the day before.

“It always hurts to say this, but we have to extend the lockdown for at least another two weeks,” Berejiklian said in Sydney on Wednesday.

“We want to get out of this confinement as quickly as possible and that’s why we have the adjustments we have.”

Since the first case of the outbreak was discovered near the popular Bondi Beach in mid-June, the lockdown has been extended twice. The total number of infections in this port city of 5 million is now just under 900, with two deaths, the first in the country this year.

Berejiklian has repeatedly said the lockdown, in effect since June 26, will only be lifted when the number of new reported, communicable cases approaches zero.

Of the 97 new cases, 24 were community infectious, which means authorities expect more cases of the highly contagious delta variant to emerge in the coming days.

Many non-essential businesses remain closed and most school students are forced to stay at home, while city dwellers can only leave their homes for essential activities and some exercise.

Neighboring Victoria, which has spent nearly a third of 2020 under lockdown as the epicenter of Australia’s first wave of COVID-19 cases, has reported the largest daily increase in cases in weeks, all linked to the team of furniture carriers that brought the virus into the country. State of Sydney.

Of the seven new cases recorded in the state, one person attended a football match at Melbourne Cricket Ground while being infected, which means 2,000 people who were in the same partner area will have to undergo tests, according to authorities.

Hundreds of people were ordered to isolate in the state and an apartment building visited by the mobile team was closed. Investigators were looking for evidence of possible contacts, but there were no indications of plans for further restrictions on movements.

“Collectively, as a community in Victoria, I am confident we can catch up, but if we have to resort to additional weapons…we will,” said Jeroen Weimar, the state’s COVID-19 response director. very critical.”

Authorities in a third state, South Australia, have said they are trying to rebuild the movements of the same furniture movers who traveled there after Victoria, and that the state could impose restrictions on travelers from Victoria.

READ  Taiwanese believe relations with the United States would not change if Biden wins: Poll