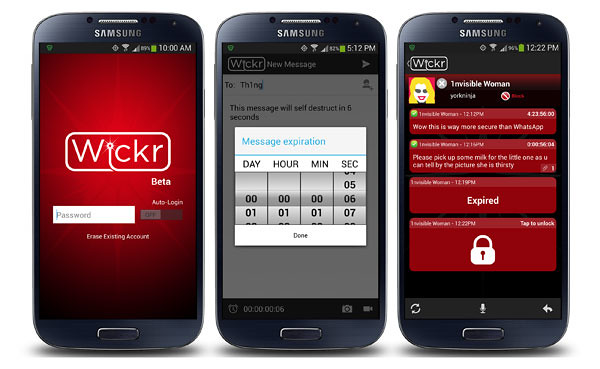 What it is and how it works and partners Wickr, considered one of the most secure messaging apps

In recent months, in addition to the well-known Whatsapp, Telegram, WeChat, etc. There’s a new instant messaging app that talks a lot: Wickr. Launched by an American company of the same name, and founded in 2012 by a group of privacy and security experts, Wickr makes security its strength.

Wicker: What is it and how does it work

Wickr is considered one of the most secure messaging apps, so much so that it is also used by the US Department of Defense and defined by the National Security Agency as “the world’s most secure collaboration tool”.

Wickr is available for iPhone and Android, and it also hasRequest Desktop for Windows and Linux. When registering, the application does not require a phone number or an email address, you just need to choose a nickname. So this system makes it difficult to identify the user, but there is an option (optional) to enter your phone number and other users can find it more easily.

Wickr was one of the first apps that launched the Expiration Timer: once you set the duration of sent messages (6 hours to 6 days), it cancels itself when it expires.
The app also comes with an additional option, called Burn-On-Read Timer, to be set before a message is sent: if it’s activated, the sent message, once read by the recipient, will be deleted automatically. This second timer can be set between 3 seconds and 6 days.

The app – which also implements E2E encryption on calls, video calls and voice messages – is among the most secure because it has very strong encryption: Wickr Secure Messaging Protocol. This system uses both symmetric AES 256 encryption and asymmetric elliptic curve encryption: in short, the encryption used prevents anyone who might steal or seize the device – eg a police authority with an order – from reading messages, precisely because Wickr does not. I know them. The principle conceived and used by the company is called “ignorance by design”.

WICKR: MEMBERS AND TOP OF THE COMPANY

In March 2014, a $9 million funding round was announced led by Gilman Louie of Alsop Louie Partners that also included investments from Juniper Networks and the Knight Foundation. Three months later, in June 2014, comes a second round of $30 million in funding led by Breyer Capital, including CME Group and Wargaming.

In recent days, Wicker has jumped to honors in Italian news in the case concerning Piero Amara, the Sicilian lawyer who was already convicted of corruption in judicial proceedings in the investigation of the fictitious “Hungary lodge” and yesterday in prison, on the order of Potenza, accused of bribing prosecutors and public officials to obtain on legal services for his clients.

According to the judges, Amara was supposed to continue doing business until a few months ago, and To avoid investigation“He has kept all the people who had extensive relations with him by communicating with the Wickr encryption system that keeps conversations secret using military-grade encryption algorithms.”