A fist fight between the representatives of the Pan African Parliament 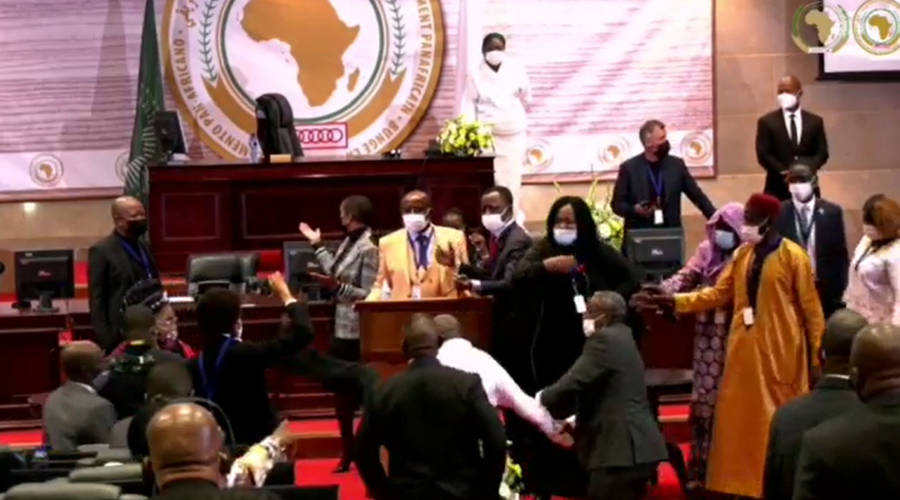 (Agencies)
Chaos descended into the African Parliament, Monday, after a disagreement between his deputies regarding the election of the presidency of the parliament, as a result of which one of the members threatened to kill his colleague, and the matter developed into a fist fight between the angry members, according to what African media reported.
The quarrels took place in the meeting hall in the city of Midrand in South Africa, where the dispute raged over the process of electing a new president to the legislative body of the African Union. The scenes of the clashes were broadcast on the South African Broadcasting Corporation (SABIC). It suspended the parliamentary elections, while the leaders worked to find a way forward.
In the video of the incident, the deputies shouted loudly, and kicked each other. In the midst of the clash, which saw a brawl between two women, an angry lawmaker pulled off his jacket and took a kick at South African lawmaker Pimy Majodina.
The deputy, who was not identified, said he was not trying to kick Majodina, but rather was trying to kick a cell phone from the hand of another lawmaker filming the chaos on his phone.
The chaos spread throughout Parliament, and other MPs shouted through their microphones, saying, “There are” armed men in the hall “, and claiming that they were threatened by a group of South Africans with pistols. Majodina said there were no weapons in the hall.
Tensions were exposed for the first time during last week’s session, when South African MP Julius Malema was heard threatening Malian Representative Ali Kony in the midst of the session.
The disagreement stems between a group of countries from West Africa and a bloc from southern Africa over whether the presidency should rotate between the various regions of the continent.
The last two presidents of the African Parliament were from West Africa, and there was no South African president in the short history of the parliament, which appeared in 2004. The African Parliament includes 229 deputies, representing 52 African countries.