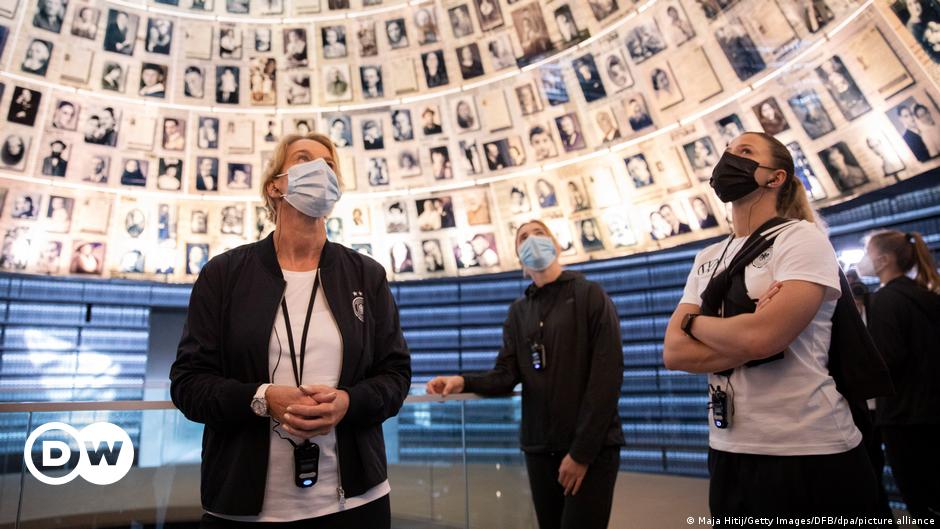 “Anti-Semitism is allowed, we are allowed to be marginalised, we are simply not allowed to tolerate human misconduct,” national team coach Martina Voss-Tecklenburg said after visiting the Yad Vashem Holocaust memorial in Jerusalem. “We need moral courage, we just have to learn from it and call attention to it again and again.”

The day after the German women’s team won 1-0 in the World Cup qualifiers in Israel, a delegation of the German Football Association of eight players appeared through the memorial. In addition to Vos-Tecklenburg, sporting director of the German national teams, Guti Chatzialexio and team manager Mika Fischer, there were also five national players: Lena Latwin, Tapia Wassmuth, Laura Pinkkarth, Laura Frilang and Martina Tojkovic.

The group then laid a wreath at the memorial plaque for Janusz Korczak. The former pediatrician and director of an orphanage in Warsaw in August 1942 insisted on accompanying about 200 children from the orphanage during deportations, despite knowing that they would also die.

“For us, sometimes things are too far away, and today they are very, very close again,” said Voss Tecklenburg. The players were also deeply affected. “You always have to be aware of what happened during the Nazi era. How many dead – 6,000,000 Jewish victims, that’s incredible,” Latwin said. Wassmouth referred to the role as a national player to represent Germany: “We have to be aware of what happened back then. I think this will keep us busy for a long time and we should try to never forget.”

And the German federation team struggled, on Thursday evening, to win the third qualifying match for the World Cup in Australia and New Zealand in 2023. Svenja Huth scored the only goal in the match in the 18th minute. Next Tuesday (starting at 4:05 pm CET), the German national team will meet With Israel back in Essen.