“Where are we taken?” Refugee camp Leba explained. 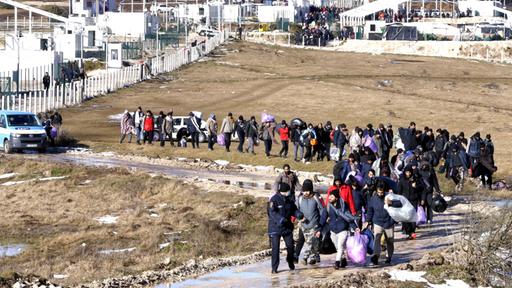 Hundreds of refugees from the burned Liba reception center had to endure the winter cold in Bosnia. Andrea Bear It was there when they finally managed to leave the camp.

Several buses stop at a small intersection in the middle of the countryside near Camp Leba, about 25 kilometers from Bihac. Hundreds of refugees and migrants are waiting here, carrying their belongings with them in large, colorful plastic bags. When they’re supposed to put it in the trunk and get in, there is a certain feeling of discomfort. The groups try to stay together because the destination is unclear, as one says: “I don’t even know where we are going. They will take us somewhere else. But no one tells us where.”

No water, no electricity, no doctor

No, says this guy from Islamabad, Pakistan. It is much warmer in northwestern Bosnia and Herzegovina than it has been in the past few days. But despite the sunshine, he wraps himself in a gray-green woolen blanket. Like many of the people waiting here, he appears tired and exhausted. He says he was housed in Camp Lipa for six months. But the last few days were going to be particularly stressful. Due to the disagreement with local authorities and the central government in Sarajevo, the International Organization for Migration, IOM in short, withdrew from Camp Liba. No one jumped in, and 1,200 people stayed with him. No water, no electricity, no doctor.

Food was only allowed to be distributed once a day. On Tuesday morning, the Austrian NGO SOS Balkanroute offered 1,200 classes. Petar Rosantica of Vienna helped organize. He’s heard people should be taken away, and of course he thinks that’s a good thing: “Fortunately. I hope it’s a better place,” he says.

READ  Coronavirus: Civil servants should 'return to their offices quickly'

Three guys just got their share, and they also seem exhausted. They say Muhammad speaks better English, he should speak on their behalf. “They gave us much less in the past few days than they did today,” he says, displaying a plastic bag of white bread.

The destination is known only in the afternoon

Several refugee organizations are in place, and IOM staff can also be seen this morning. Bosnian police are investigating and suddenly there is movement. The camp must be evacuated, this is surprising to everyone. And let them go on a dirt road. Somehow some of them seem happy that they are going somewhere and they don’t have to spend another night in this ruined place in the burning abandoned camp. Many ask, “Where are we taken?” Bus that takes us to Italy, someone says, no to Germany. they laugh.

Even as you progress, you don’t know where you are going. The destination is known only in the afternoon. Refugees and migrants come from the Lipa camp near Bihac to Pradina, about 30 kilometers south of Sarajevo. There they will be housed in a Bosnian army building. This should be a temporary solution until Camp Liba is rebuilt, according to the Ministry of Security.

But in the evening it turned out, contrary to what was announced, that the buses did not leave for Pradina near Sarajevo. According to Bosnian Security Minister Selmo Cikotek, the Bosnian Croat ministers are preventing the move. At the same time, Cikotic criticized loudly: he did not vote. Instead, people slept in the buses they took about 10 hours ago. There was no solution in sight in the evening.

Whatever happens in the end with buses full of refugees: the issue remains in the region. More than 2,000 refugees and migrants remain homeless in the region. They live in the woods or in vacant buildings. The current refugee camps are overcrowded.

According to Petar Rozandyk, not only in Bosnia and Herzegovina should refugee policy change radically: “The main thing now is to create humanitarian conditions, humanitarian camps. Good dynamics have not been developed in the camps. That is why there is a need for an EU asylum center in Bosnia and Herzegovina. Where people get answers, whether the asylum application is approved or not. Ultimately, however, they need answers. “