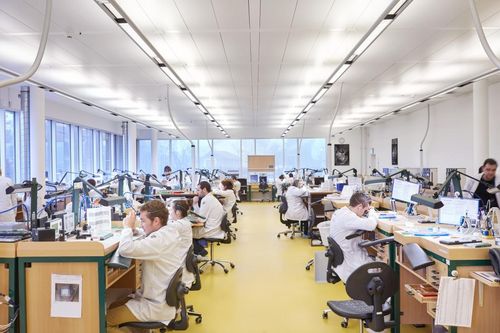 With the current inclusion on the “List of the Intangible Cultural Heritage of Humanity”, UNESCO pays tribute to the living traditions of watchmaking and art mechanics that characterize the French-Swiss Jura. The art of watchmaking is especially known in the canton of Vaud, but it is also known throughout Switzerland.

The manufacture of musical cabinets and music boxes is especially typical of Sainte-Croix in the Jura-Nord region. In the Lake Geneva region, there are five other cultural and natural assets that are also part of UNESCO’s world heritage: the Laveau wine-growing region, the prehistoric heap dwellings of Morges, Le Corbusier’s architectural works, the archive of the Montreux Jazz Festival and the Vevey Wine Growers Festival.

The nomination was submitted by Switzerland with France in March 2019 and approved on December 16, 2020. The craft combines science, art and technology between individual and collective competencies of theory and practice in the field of micro-mechanics. The teaching of traditional and innovative craft techniques is transmitted at the same time by many artisans as well as companies, schools, museums and associations, especially here in the Franco-Swiss region.

Several partners participated in the nomination, including the Federal Bureau of Culture (BAK) with a bi-national experimental group made up of various people working in watchmaking and art mechanics. The arcjurassien.ch association has administered the implementation of various measures to preserve cultural heritage (documentation, training, knowledge transfer, awareness, transmission of traditions).

Canton Vaud is part of the Interreg “Arc horloger” project that was supposed to make the registration known. This includes a joint photo exhibition at the International Watch Museum in La Chaux-de-Fonds in the canton of Neuchâtel and at the Musée du Temps in Besançon, France. In the canton of Vaud, in particular, the Museo des International Center for Technical Mechanics (CIMA) A historic collection of music boxes and instruments as well as a mechanical workshop can be visited as it was at the beginning of the twentieth century.

Additionally, the Baud Museum L’Auberson has a range of music boxes, automatic and orchestra. The tradition of manufacturing precise mechanical movements with state-of-the-art innovations leads to Manufacture REUGE SA Its headquarters are in Saint Croix. These masterpieces are greatly appreciated by heads of state and royalty around the world.