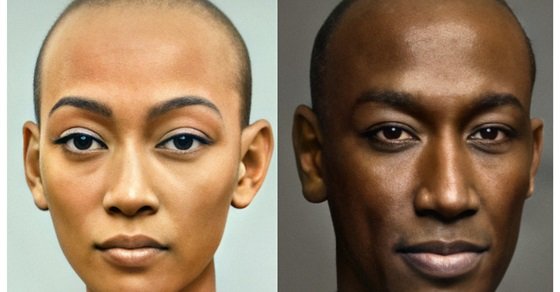 Two pictures published by a Dutch photographer, based in the capital, “Amsterdam”, have become noticeably popular on social media platforms in recent days. The two pictures include a depiction, based on modern technology and artificial intelligence, of the Egyptian Pharaoh “Amenhotep IV” or “Akhenaten” and also Queen “Nefertiti”.

The Dutch photographer “Bas Otervik” had shared these shots through his accounts on social media platforms last Friday, and wrote in his tweet on the Twitter site: “Akhenaten and Nefertiti .. I do not claim that I am a scientist .. The historical photos that he prepared are based on Mostly artworks dating back to the era in which their owners lived. “

And he went on, “Using artificial intelligence … I filter the sculpture patterns in the historical portraiture and direct it to a reliable result,” noting that the two pictures he shared in recent times are mainly based on antique sculptures and engravings depicting “Akhenaten” and “Nefertiti” in order to reach Shape and facial features closest to them.

It is noteworthy that “Bas Ottervik” was famous in the past for his use of advanced techniques to convert old paintings of public figures and celebrities into modern photographs. He previously converted one of Fayoum’s historic paintings into a modern photograph, and earlier this month he shared an image that includes a depiction of the pharaoh “Tut” Ankh Amun “based on modern technologies and based on the golden mask of the Egyptian pharaoh and other inscriptions and sculptures, as he explained in another tweet via his Twitter account.

The pictures of “Akhenaten” and “Nefertiti” in particular sparked controversy on social media platforms, as pioneers asserted that the two images lack accuracy and scientific foundations, and some described them as a “falsification of history”. Among the comments of the pioneers was also the meaning of artificial intelligence that enables you to know the features. Through the bones of the skull, but depicting the color of the skin and the shape of the hair is inaccurate, with the assertion that “the real statues of them are clear and do not need to be photographed.”

# Akhenaten And the #Nefertiti

I do not claim to be a scientist. The historical photos I make are based on the artwork I made mostly during the period of their themes.
Using AI, I filter the sculpture patterns of old photos and guide them to a reliable result# Trustworthy pic.twitter.com/Qt3485Gnaq

You made an impression on # Tutankhamun With help # Neural networks Based on the golden mask and some other images:# A black historical month #Date_black # Trustworthy #Ai #Artificial intelligence #History pic.twitter.com/pvG2YOpDq1

READ  The Past of Us Portion 2 is the third maximum-grossing game in the US in PlayStation record • Eurogamer.web