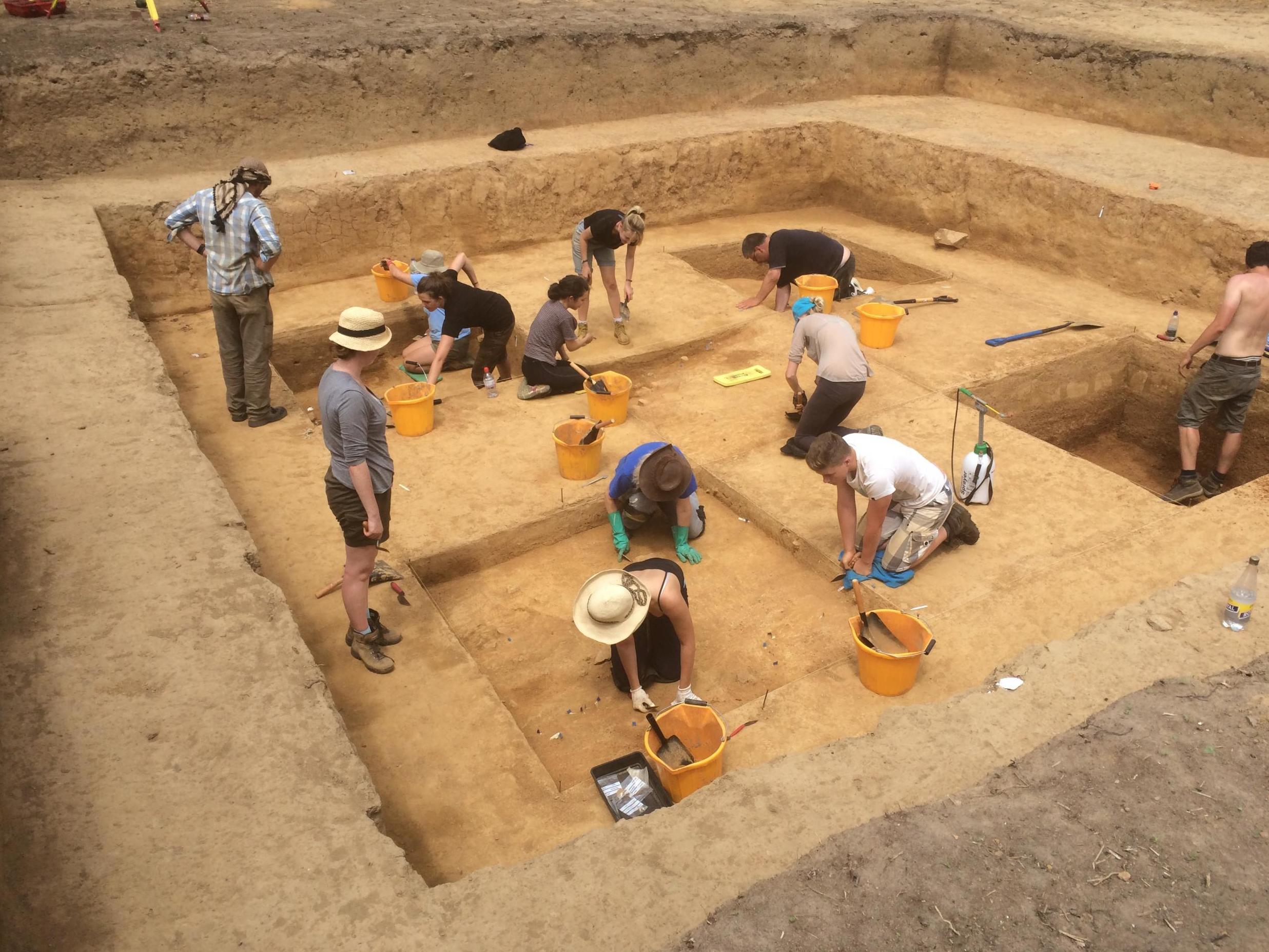 Archaeologists on the Channel Islands have discovered some of the earliest Stone Age art ever found in northern Europe.

The discovery is of huge importance – not only from a prehistoric art perspective, but also because it strongly implies that the remains of a long-lost art-producing Stone Age culture may well lie hidden from view at the bottom of the English Channel.

The art, discovered on the Channel Islands, probably portrays animals as well as abstract patterns.

But the site – at Les Varines, near St Helier on Jersey – is also producing evidence of a very substantial Stone Age encampment, involved in the production of spears and other hunting equipment.

The animals, probably portrayed on the site’s newly discovered art, appear to include three mammoths and a horse.

Both species would have been attracted to what would then have been the biggest river system in Europe – the now long-vanished so-called Channel River which existed where the English Channel is now.

What’s more, the particular Stone Age culture (known as the Magdalenian), which produced the newly discovered art on Jersey, is known from elsewhere in western Europe to have mainly lived and hunted in river valleys.

Increasingly, archaeologists are beginning to more fully appreciate the importance of drowned landscapes in the story of Britain.

Now the new discovery on Jersey raises the probability that dozens of major Stone Age sites (some probably featuring prehistoric art) are waiting to be discovered at the bottom of the English Channel.

The Jersey site has only been found because it was on high enough ground not to be inundated by rising sea levels during the formation of the Channel. It therefore offers the first ever glimpse of what is likely to exist on or under the seabed itself.

So far, the Jersey site has yielded thousands of flint artefacts (including spearheads and antler-and-bone-working tools), at least three large hearths, evidence of cooking and feasting, three mysterious circular worked stones – and dozens of fragments of up to 7 stone plaques (covered with abstract or figurative art). It is likely that the encampment was home to a sizeable community, consisting of several dozen individuals.

The site also has implications for the story of Stone Age Britain itself.

The ‘border’ between ‘continental’ Europe and Britain at this period was the Channel River. Obviously it was less of an obstacle than its successor waterway – the English Channel. But it was still a very substantial barrier – probably between three and six miles wide. As such, it was comparable to the current width of parts of the modern Amazon. In that era it would have been one of the widest rivers in the world.

At the time that the Jersey site was flourishing (at some stage between 13,000 and 13,500 BC, Britain is currently thought to have been uninhabited. First of all, the Channel River was a major barrier – and, secondly, Britain was probably too cold for any year-round occupation.

However, if the Channel River valley was an important and resource-rich area of human activity at this period (as suggested by the Jersey site and some other evidence), then it is possible that what is now southern Britain was visited by Jersey/Channel River valley hunters at a time when Britain is thought to have been uninhabited.

It’s currently believed that what is now Britain had no human residents between around 29,000 BC and around 12,800 BC.

But the Jersey discovery – and its Channel River implications – raise the possibility that Britain may have been receiving human visitors hundreds of years before that latter date.

At present, the earliest known post 29,000 BC reoccupation of Britain is represented by archaeological evidence at Cheddar in Somerset, Pixies Hole and Kent’s Cavern (both in Devon), Creswell Crags on the Nottinghamshire/Derbyshire border and in King Arthur’s Cave (in Herefordshire) – all dating from between 12,800 BC and 12,500 BC. But all those sites are associated with a Stone Age culture that originated in north-west Europe and arrived in Britain via the lands now covered by the North sea (ie not from Jersey/Normandy).

The prehistoric art discovered on Jersey is, in many ways, of a completely different nature to Europe’s most famous Stone Age art.

The best-known Palaeolithic art was created on the walls of caves (in places like the Dordogne and northern Spain).

By contrast, the Jersey art is on small stone plaques – each one perhaps just 5 to 15 cm across. The Jersey site has produced one almost complete example (broken into two pieces) and fragments of up to 6 others. The nearest other site producing quantities of art-covered plaques is in the French Ardennes – 280 miles to the east.

But it’s not just the size and mobile nature of the Jersey art that makes it different from cave art. It is also its social context and its apparent function.

Cave art was usually not created within living areas, whereas the plaques were. What’s more, plaques (both at the Jersey site and elsewhere in France, Germany, Portugal and Spain) often seem to have been deliberately broken by their makers. Whether that was to prevent other people seeing them or as some sort of ritual or magical exercise (related to hunting the animals, etc portrayed) is not known.

What’s more, one of the Jersey plaques may also feature a human face – an extremely rare subject in the art of that period.

The images and designs portrayed on the Jersey plaques have been extremely difficult to interpret – because the Stone Age artists used the same plaques to do multiple episodes of engraving. Each episode’s artistic production was typically superimposed directly on top of the previous episode’s artworks, thus making it very difficult for the archaeologists to disentangle the different images and designs. It appears that the actual act of engraving an image or pattern was considered much more important than its clarity or appearance – and that the stone plaques on which the artworks were inscribed were also perceived as having special though very temporary significance. The interpretation work on the Jersey art has been carried out by Dr Silvia Bello of London’s Natural History Museum.

The excavation of the site and analysis of all the finds has been carried out by a team of scientists from nine UK institutions – the Universities of Newcastle, York, St Andrews, Strathclyde, Liverpool and Wales, as well as London’s Institute of Archaeology (part of University College London), the British Museum and the Natural History Museum.

The research has been led by archaeologist Dr Chantal Conneller of the Newcastle University.

“’These engraved stone fragments provide exciting and rare evidence of artistic expression at what was the farthest edge of the Magdalenian world. The people at Les Varines are likely to have been pioneer colonisers of the region and creating engraved objects at new settlements may have been a way of creating symbolic relationships with new places,” she said

Dr Ed Blinkhorn, senior geoarchaeologist at University College London and Director of Excavations at the site, said that the plaques were “tricky to pick apart from the natural geology at the site – every stone needed turning”.

“Their discovery amongst hearths, pits, paving, specialist tools, and thousands of flints shows that creating art was an important part of the Magdalenian pioneer toolkit, as much at camp as within caves,” he said.

The research took place as part of the Ice Age Island project, funded by Jersey Heritage, the British Academy, the Society of Antiquaries, the British Museum and the Calleva Fundation – and is published today in the on-line science journal, PLOS ONE.