Trump Covid: The US President has mild symptoms – the White House 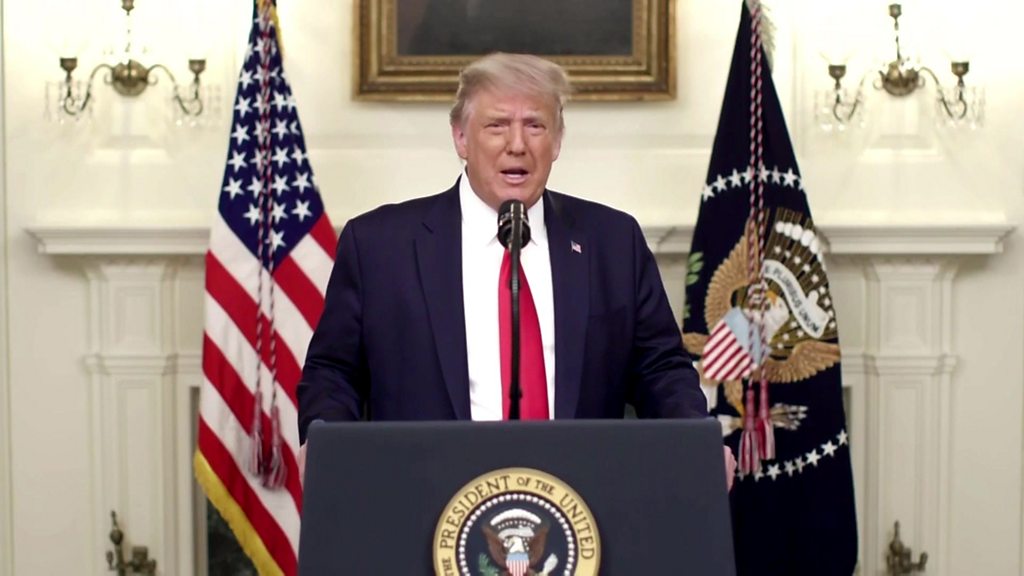 The White House said US President Donald Trump is suffering from mild symptoms of Covid-19 after he and his wife Melania tested positive for the Coronavirus.

Trump’s chief of staff said the president was “in the position” and “in good spirits,” adding that he expects him to recover quickly.

This news comes just over a month before the presidential election, as he will face Democratic challenger Joe Biden.

Biden himself and his wife, Jill, tested negative on Friday.

“I hope this is a reminder,” he tweeted after the result. “Wear a mask, maintain a social distance, and wash your hands.”

Biden employees said he will travel to Michigan on Friday as planned for several campaign events.

Other members of the Trump family have tested negative.

The process of tracking all of the president’s communications in recent days is continuing, officials said, adding that Mr. Trump is considering how to address the nation or reach out to the American people on Friday.

But he pulled out of a phone call with the frail seniors scheduled for Friday, leaving Vice President Mike Pence to chair the meeting.

But there was criticism of Trump’s decision to go to a fundraising campaign attended by dozens of people in New Jersey on Thursday, apparently when officials already knew about Ms. Hicks’ symptoms.

Hicks, 31, flew with Trump aboard Air Force One to attend the first presidential televised debate with Biden in Ohio on Tuesday. Some members of the Trump family attending the debate were seen not wearing masks.

Trump has mostly refused to wear masks, and has often been photographed not socializing with his aides or others during his official engagements.

Coronavirus has infected more than 7.2 million Americans, killing more than 200,000 of them.

What do we know about the Trump case?

White House Chief of Staff Mark Meadows said Mr. Trump was suffering from mild symptoms, but he and Melania were “in good spirits.” He said he was optimistic that the president would recover quickly.

Meadows added that he was and will remain in his job, saying updates regarding his health are expected later on Friday.

Earlier, Trump wrote on Twitter: “We’ll get through this together.”

Melania Trump She tweeted that she was looking forward to a speedy recovery.

She said, “Thank you for the love you are sending us. I have mild symptoms but generally feel good.”

Mr. Trump’s physician, Dr. Sean Connelly, issued a statement late Thursday, He said the president and first lady “are both fine at this time, and plan to stay at home in the White House during the recovery period.”

According to Trump’s most recent physical examination earlier this year, he weighed 244 lbs (110.7 kg). This is considered beefy for his height of 6 feet 3 inches.

But Dr. Conley stated at the time that the president was “still in good health”. Mr. Trump will also receive the best medical care available.

The U.S. Centers for Disease Control and Prevention (CDC) says a person should self-isolate for 10 days after a positive test.

It is unclear how Trump’s positive test will affect the arrangements for the second presidential debate, which is scheduled for October 15 in Miami, Florida.

Mr Trump is not the first world leader to show positive results. Earlier this year, British Prime Minister Boris Johnson and Brazilian President Jair Bolsonaro were injured. Both have since recovered, although Mr. Johnson had to receive regular oxygen therapy to aid breathing during treatment in the hospital.

The competition has basically changed

The US presidential election has been turned upside down.

This sentence could have been written for any number of moments in a tumultuous year in American politics, but nothing quite like this has happened this year, this decade, this century.

Just 32 days before the presidential election, Donald Trump tested positive for Covid-19. Given his age, 74, he is in the high risk category for disease complications. At the very least, he will have to quarantine while he is being treated, which means that the US presidential competition – at least his side of it – has fundamentally changed.

The initial effects are evident. The president’s strict campaign schedule – which included visits to Minnesota, Pennsylvania, Virginia, Georgia, Florida and North Carolina in just the past week – has been suspended indefinitely.

Sure, Trump will have alternatives on the way for him, but given that he has relied heavily on his family and senior administration and campaign officials for such tasks in the past, many of them may have to quarantine due to their exposure to the virus. , This campaign process will also be disrupted.

Who else was tested?

House Speaker Nancy Pelosi, who would theoretically take over government responsibility if both the president and vice president were incapacitated, said she took the test Friday morning and had not received the results yet.

Pelosi, a Democrat, said that “continuity plans are in” but she herself has not been approached by the White House about the matter.

Several White House officials have been injured in the past, and the White House has screened his aides and anyone else who has contact with the president daily.

How did the United States and the world react?

In a tweet, US Vice President Mike Pence and his wife Karen wished the presidential couple luck:

Karen and I send our love and prayers to our dear friends, the President Embed a Tweet And the Embed a Tweet Melania Trump. We join millions across America praying for their full and speedy recovery. God bless you President Trump and the wonderful first lady Melania.

In a tweet, Biden and his wife wished the first couple a speedy recoveryHe said, “We will continue praying for the health and safety of the president and his family.”

Boris Johnson wrote on Twitter: “My best wishes to President Trump and the First Lady. I wish both of them a speedy recovery from the Coronavirus.”

Other world leaders, including Indian Prime Minister Narendra Modi and his Israeli counterpart Benjamin Netanyahu, have also sent messages of support to the couple.