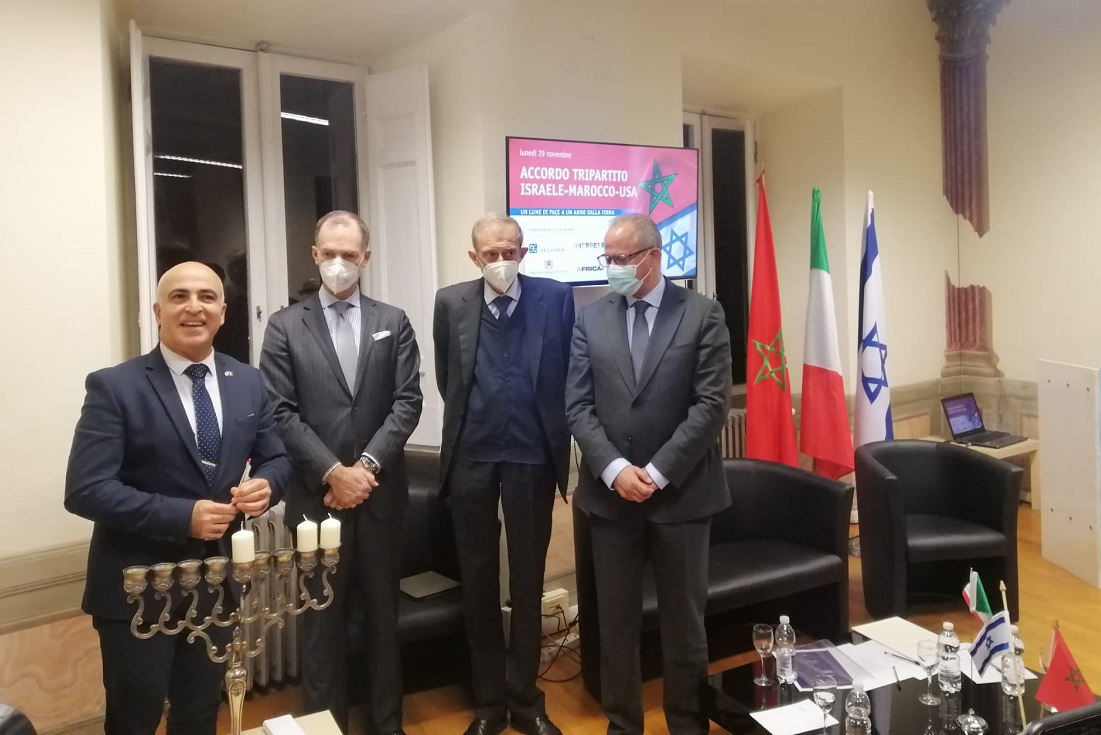 The ambassadors of Israel and Morocco met one year after the normalization of diplomatic relations between the two countries at the De Gasperi . Foundation

The ambassadors of Israel and Morocco together light a Hanukkah candle to expel darkness and revive the Abraham Agreements. The occasion was on November 29 in Rome at the Alcide De Gasperi Foundation as part of the event “Tripartite Agreement Israel, Morocco, USA. Light of Peace One Year After Signing”.

In fact, the Jewish religious festival of Hanukkah marks the first anniversary of the rapprochement between Israel and Morocco in the context of the Abrahamic agreements, the agreements that the Israeli ambassador said, Dror IderHe hoped to re-launch it with the accession of other Arab countries thanks to Italy’s help. “We turned on the light and brought out the darkness. Italy can also help us extend it to other countries in the region,” the Israeli diplomat said. “The people of the region understand that the Jewish people are part of the Middle East. Jews have lived in Morocco for at least two thousand years.” In fact, what Morocco and Israel have in common is “incomparably greater than what divides them”.

In his speech, the diplomat said that the agreements are “a promise of fruitful cooperation in many areas and represent an enhancement of security and launch of a grand vision for the United States.” Ambassador Idar added: “By the Abrahamic agreements, his sons Isaac and Ismail cooperate again,” referring to the light of the Feast of Lights that lit up between Morocco and Israel, which leads to “fruitful cooperation.” He concluded by saying, “Italy can help us expand the agreements to include other countries,” expressing his hope that “the Palestinians will also enter the circle of peace,” after the normalization of Israeli relations with Morocco, the UAE and Bahrain.

This meeting came a few days after the historic visit of the Israeli Defense Minister , Benny Gantzin Rabat and his meeting with his Moroccan counterpart, Abdellatif LoudiyiThis led to the signing of many cooperation agreements in the fields of security, intelligence and links between defense industries. Idar’s wish was that this be just the beginning of a collaboration.

“Morocco is working tirelessly for peace and stability in the Middle East,” the Moroccan ambassador explained. Youssef Balla, which confirms how the Abrahamic agreements “established the special relationship between the two countries.” Bala said that with the tripartite agreement between Israel, Morocco and the United States, there was “momentum” in bilateral relations. Diplomatic offices were opened and Israeli ministers visited Rabat. There is now a cooperation agreement, 20 economic and trade agreements and defense memoranda of understanding. And in the first six months after the agreement, Bala noted, “trade increased by 50%.” The diplomat from Rabat pointed to the depth of the association with Moroccan Jews and the references to the Jewish component in the constitution of the Kingdom of North Africa. The ambassador concluded that “the tripartite nature of the agreement gives it all its importance, stressing the strength of relations with the United States.

“We must urge the Arab countries and the Palestinian National Authority to seize the opportunities of the Abrahamic agreements,” said the head of the House of Representatives’ Foreign Affairs Committee. Piero Facino. He continued, “Peace must be achieved by the parties concerned, but others can create an appropriate context for the resumption of dialogue,” stressing the role that Europe can play. “But to perform a positive function, recognition must be made on both sides,” Israeli citizens today view Europe with “suspiciousness” while Palestinians view “Europe is close.” He stressed that it was “good” for the Palestinians to view neighbors as neighbours, “but it must be the case for the Israelis, and only in this way can a role be played.”

At the end of the meeting with the Ambassador of Morocco Bala, Chargé d’Affairs at the US Embassy Thomas Smith And for House Foreign Affairs Committee Chairman Fasino, Idar recited the blessing by lighting Hanukkah candles.