The electoral arena for the Berlin candidates 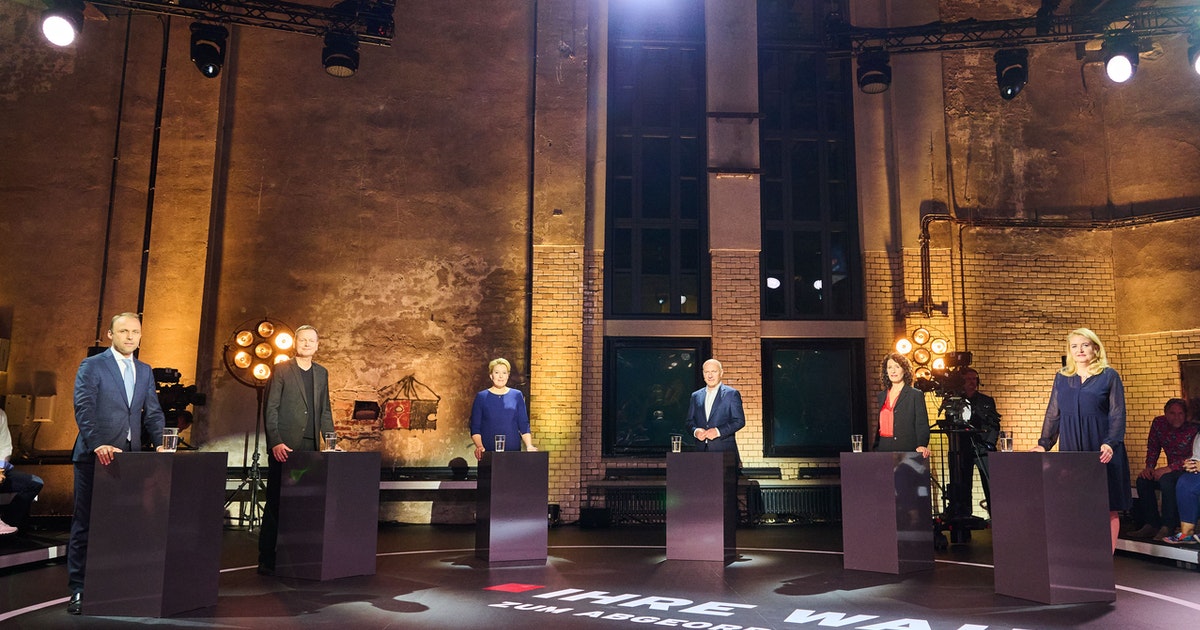 Berlin – For the federal election, yes, that’s easy. Chancellor nominee Annalena Baerbock and her competitors Olaf Scholz and Armin Laschet have been invited to the studio. A reasonably appealing name was quickly found: Triell – even if coordination became increasingly tiring and tiring.

RBB’s task was more difficult. The capital’s Broadcasting Corporation had made it a duty to provide information to allow all leading candidates from the House of Representatives to give their opinions at once. And as you know, there are six: according to their latest polls, Sebastian Zaga (FDP), Kristen Brinker (AfD), Klaus Leder (left), Kai Wegener (PYD), and Bettina Garach (Greenz) and Francesca Givi (SPD).

The thing remained with the name: what do you call such six fights? Sextrel? In sports, we know the Jahn six-fight, in which young men compete on gymnastics floor and parallel bars or uneven bars, in the 100m sprint, shooting, swimming and jumping for 100m. RBB decided on “Wahlarena”. You can do it like this.

In front of this plaza’s door—the site was the E-Werk in Mitte—the Claques groups from the Greens and CDU held Tuesday night. But before their seniors came along, Francesca Jaffee and Kristen Brinker showed up around the same time. When the AfD’s first woman passed, Antifa’s experimental slogan “Alerta, Alerta Antifaista” roared through the ranks of the Green Party. With Jeffy they kept quiet as later with Sebastian Zaga.

The chant “Newstart Berlin” was chanted for a short time – Kai Wegener arrived. When Klaus Lederer fought for a cigarette for 4 minutes and Bettina Garsch refused to smoke, she could have started. The “election arena” was open. There are 75 people in the audience, supposedly representing some kind of cross-section of the population. The presenter sets the first topic with the first syllable – this is not surprising, but the topic is live. A family from Marienfelde cannot find an apartment in which a friend can move in with the woman who has her four children. The family has been searching for four years, and candidates are asked one by one to say how they want to help.

See also  Three crashes on the A44: Traffic chaos in the Whirlpool

New building everyone agrees. but how? For Lederer, new buildings must be social. Wegener attacks him to get the left’s approval on the expropriation issue. Jaffe says the SPD will accept the decision in a referendum. But she wants to solve the problem differently.

The mood was not as calm as it was before the show. Jeffy looks tired, a little nervous, but confident in the text. Jerash is aggressive. Lederer is keen to fight: if in doubt, he will also mess with those who earn money from apartments. In between, presenter Jesse Wilmer and colleague Sasha Hengst attempt to persuade candidates to answer the audience’s wishes and questions in a very concrete way. One thing is for sure: this will not be possible all evening.

A quick look at the Tempelhofer Field survey. So yes or no? FDP: Yes, cultivation. Leader: Not at first. Jiffy: Another ocean development referendum. CDU: Yes, obviously, plus a citizen survey. Garsh: No. The field is unique. Brinker: Yes, in addition to the referendum. So far, very well known.

Next topic: Traffic. A question from Ralph Fries, who needs an hour and a half every day because he’s constantly stuck in traffic: “How do you plan to ensure we can continue to drive properly here in the city for the next four or five years?”

Presence of police and surveillance cameras

Kazaga calls for solutions to “real problems” and not just “ideologies”. Garsh joins in: “They’re all talking against their best knowledge.” Then straight to Giffey and the CDU/FDP/AfD: “What really bothers me here is that you don’t want to play offroaders against each other. We don’t ban cars. But we want to offer alternatives. It doesn’t work if you pretend we don’t have space. its end.”

Then the issue of security. In the film, a waitress appears to have been ambushed twice near the Kottbusser Tor in Kreuzberg. You no longer feel safe. Wegner calls for more police presence in Coty and across town. Joffe believes that freedom in Berlin depends on everyone feeling safe. It calls for more video surveillance in “crime-prone spaces”. Broker Wilmer identifies a match with the FDP. Zaga confirms it, even Lederer sees it this way: “Now I’ll be with Mrs. Garach and Mrs. Jiffy. Women and gay people “should be able to move in the evening.”

Lots of quick rounds of topics and careful moderation

And so it continues into the evening. Housing, traffic, security, foster care, education – the topics have been touched upon, and there is little time to delve into.

A quick roll at the end: what will you do first? Brinker: It’s better to distribute the money. Jarash: Securing fair rents with housing companies. Wegener: Berlin should “work again”, especially management. Jiffy: An alliance of affordable housing built on the example of Hamburg. Lederer: Implementation of a successful referendum on expropriation. Czaja: Introduce new construction campaigns, but also rental purchase models, to enhance ownership.

There are still five days until the elections. Moderation was somewhat conservative, but took its mission of providing more information seriously. You cannot get more praise.