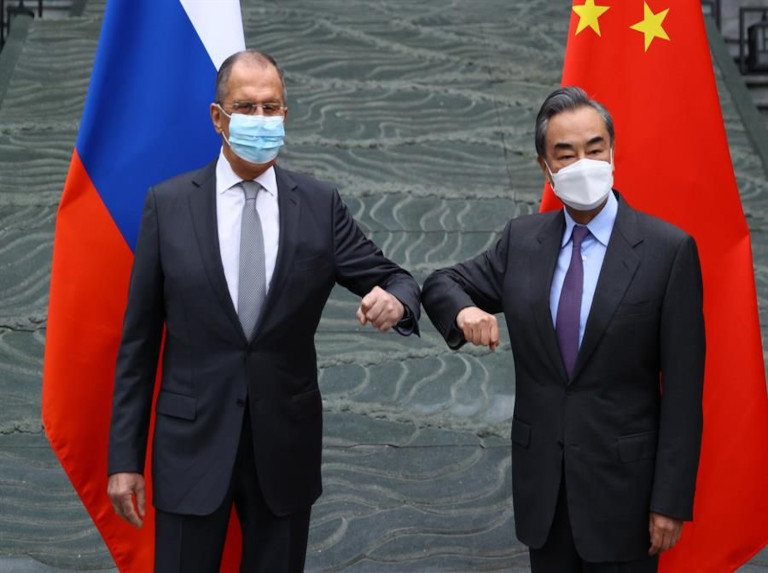 Russian Foreign Minister Sergey Lavrov began a two-day visit to China today to review the good times for relations between the two countries and to balance strategies at a time of increasing mutual tensions with the United States.

Lavrov met in the late afternoon with his Chinese counterpart, Wang Yi, in the southern city of Guilin, just two days after clashes between Washington and Beijing during their last meeting in Alaska, and US President Joe Biden called his Russian counterpart Vladimir Putin. “He fought” and accused him of interfering in the US elections in November.

According to the “Global Times” newspaper, the two sides informed each other about the state of their relations with the United States, and urged them “to think about the damage they have caused to international peace.”

The two ministers said, according to the “Global Times”, that “the United States should stop its intimidating actions, stop interfering in the internal affairs of other countries, and stop forming small groups with the aim of promoting confrontation,” adding that “all countries must follow the United Nations Charter.” To promote the democratization of international relations. “

Local press quoted experts as saying that the meeting between Lavrov and Wang “sends a message that the tough approach by the United States will not work,” Academician Wu Xinbo told the “South China Morning Post”.

Experts from the “Global Times” newspaper added that on their agenda is also how to deal with Washington over the peace process in Afghanistan and Syria, the Iran nuclear deal, or the nuclear problem on the Korean Peninsula.

Russia and China “united as mountains”

In his last appearance at a press conference earlier this month in Beijing, Wang had already declared that Sino-Russian relations are “as united as a mountain,” and that good relations between Beijing and Moscow “are necessary under the current circumstances.” This association is a “pillar of world peace.”

Wang said at the time, “The world cannot afford the luxury of collapsing due to conflicts: we must face challenges together,” while today Hua stressed that both countries “go hand in hand and oppose domination and intimidation.”

The aim of both powers is to dissuade other countries from putting pressure on them, especially with regard to their internal affairs: “It is not very reasonable to punish Russia and China,” Lavrov concluded in a joint interview with various media outlets. They arrive in Guilin.

Lavrov stressed that Beijing and Moscow are seeking “a fair and democratic international order governed by interactions between countries.”

The Russian Foreign Minister said that “the model of interaction between Russia and China is free of ideological links, is not subject to opportunism, and does not target anyone.”

Nothing to worry about

A Chinese Foreign Ministry spokeswoman said, Monday, that the development of relations between China and Russia does not target any specific country, and bilateral relations are open and frank, unlike groups that hide conspiracies in some other countries.

Spokesperson Hua Chunying made the remarks at a daily press conference in response to a question about whether the visit of Russian Foreign Minister Sergey Lavrov to China was an intentional act carried out in the wake of the high-level strategic dialogue between China and the United States.

China and Russia have always been close partners, and have maintained frequent exchanges at all levels, Hua said, adding that as members of the United Nations Security Council, China, Russia and the United States bear important responsibilities for world peace and stability. .

Hua stressed that the more unstable the world becomes, the more necessary it is for the cooperation between China and Russia to continue.

He said, “China and Russia, side by side in close cooperation and resolute opposition against domination and harassment, have been a pillar of peace and stability in the world.”

Hua said he believed Lavrov’s visit would consolidate the good momentum in the high-level development of Sino-Russian relations, and enhance the strategic coordination between the two countries in international affairs.

Lavrov is visiting China between Monday and Tuesday, at the invitation of Chinese State Councilor and Foreign Minister Wang Yi.

With information from agencies