Tennis: Police must separate Kyrgios from his model girlfriend 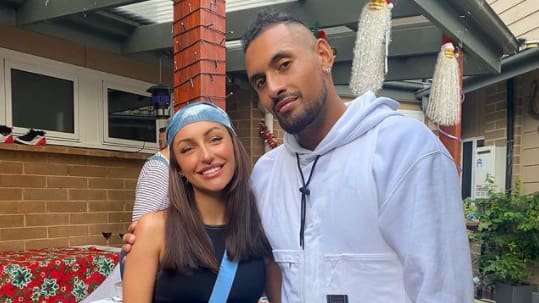 Tennis star Nick Kyrgios has returned to his native Australia after his unsuccessful appearance at the Laver Cup in Boston. The world number 97 must spend the mandatory 10-day period of hotel quarantine alongside model friend Chiara Pasari.

Should. Because instead of pleasant hours in intimate togetherness, rippers fly with the famous couple. The two quarreled so badly that on Thursday, Adelaide police rushed to separate the brawlers. “They are spending the rest of the quarantine period in separate rooms,” a police spokesman told Australian media.

One can only speculate about the cause of the conflict. Are there any bare facts behind that, which Ms. Pasari highlighted on Thursday? In an Instagram question and answer session, a follower called the Australian one night in February that Kyrgios spent at a Melbourne nightclub. In response, Pasari posts a photo of a sleeping tennis clown – topless. She writes: “By the way: this naked girl next to him in bed is not me. We hope that everything will be clear in this. is not it. However, it is entirely possible that the public accusation of cheating is behind the renewed exchange of blows in the on-and-off relationship that has been going on since July 2020.

The couple separated in February before falling back in love three months later. “I’m happier than ever,” Kyrgios told the Daily Telegraph in May. Words he could worry about in the quarantine room until next week. (red)

Are you a bad person? Ex-girlfriend shoots hard at Kyrgios(01:03)