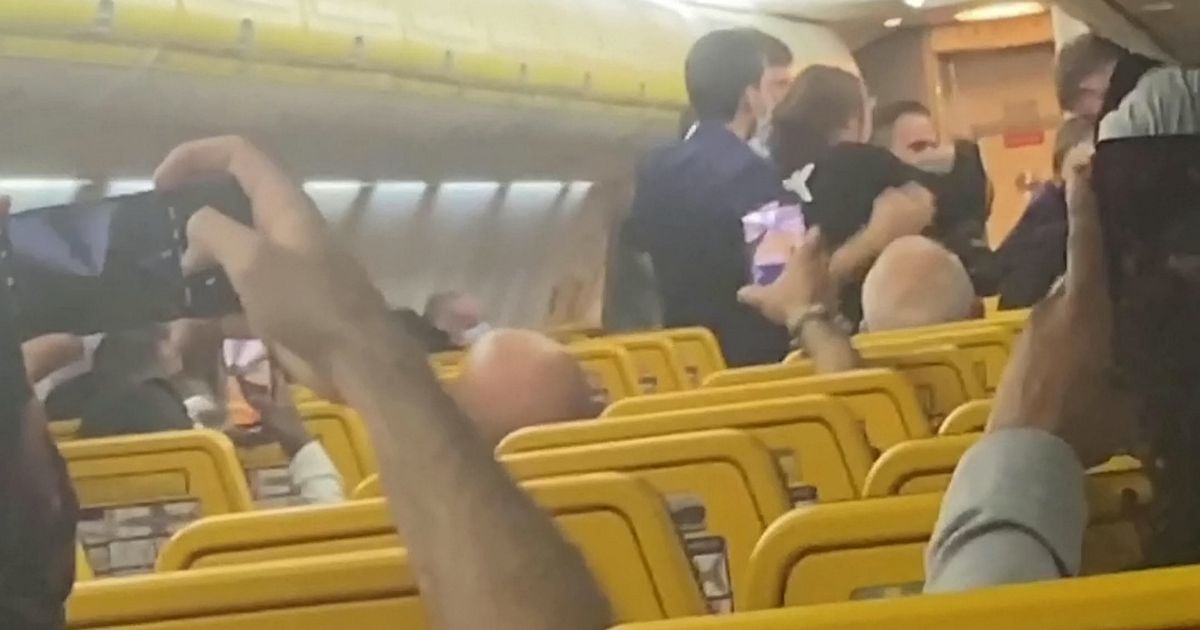 The shocking footage shows the moment a quarrel broke out among the passengers in the middle of a Ryanair flight.

Two passengers were filmed running down the aisle towards a fight in the front of the plane between a woman and a man.

Ryanair The staff could be seen desperately trying to separate the passengers, who were screaming and punching each other.

The two men running ahead are shown returning to their seats as a Ryanair flight attendant forces the woman to leave the nose of the plane.

They are believed to know the woman as well as another female passenger who can be heard screaming their names asking them to stop and “come back”.

Police were subsequently seen on board the flight between Malaga and Manchester on Monday evening (October 26).

A man can be seen at the end of the video asking a nearby passenger, “What are you wearing, hobo? Listen, do you want to go?” Before the woman catches him.

The Ryanair flight took off from Malaga and was just en route Manchester airport When the fight started.

“It was really disgusting,” said the passenger who filmed the fight and wanted to remain anonymous.

“We were about 20 minutes away from the landing and I’m not sure what happened but the woman in the blackbird started laying on this guy in a big way.

“It wasn’t a light slap or anything, she was going to him for the flogging.

“Suddenly three or four people ran forward and got stuck – there was just a fist flying everywhere!

Some of them were really old men and the Ryanair crew eventually fired them but at some point, they completely lost control of the situation.

“The staff made the woman sit behind us so I asked her what had happened and she said a man was threatening that he would kill her.

“The police boarded the ship and no one was able to get off until they checked who was involved in the fighting, so we showed an officer our video so they could find out who he was.

“The police got everyone involved in the fighting to stay on board and we heard an officer tell Ryanair employees that they might need to use taser.”

A spokesperson for Ryanair said, “The crew of this flight from Malaga to Manchester (October 26) requested police assistance upon arrival after many passengers became disturbed shortly before arrival. This is now a matter for the local police.”