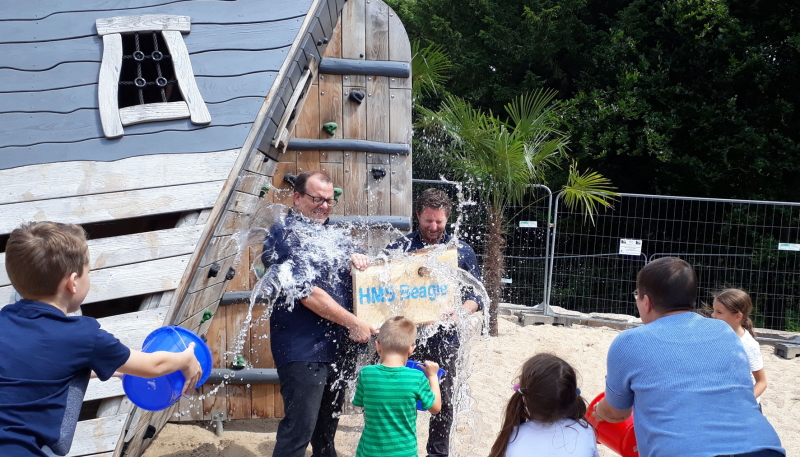 Dortmund. The large play ship from Robinson’s playground in Westfalenpark has made a long journey – and docked in the Rombergpark Botanical Garden: from now on, children can climb into the shrouds of the “HMS Beagle”, conquer the floors and look for discoveries. The wooden play ship has been parked at Robinson Arena in Westfalenpark since 2016, and is currently being remodeled. The three-pillar tower has found a new place to anchor in the stadium at Rombergpark. Today (Tuesday) Head of Sports and Entertainment Birgit Zorner and Dr. Patrick Knopf, director of the Romberg Park Botanical Garden, christened the ship and formally handed it over to the children.

Dismantling of the three-part ship began in Westfalenpark at the beginning of April. For complex transportation, the fuselage parts must be supported from the inside by steel struts. A special crane lifted the parts to the new foundations – an exciting affair for everyone involved and the kids on the playground. Then the concrete must dry for a long time before the stonework can begin and new sand can be poured into it.

At the same time, the Botanical Garden team also updated the colors of other play equipment, creating new benches and renovating old tracks. Six new waste sorting litter boxes have since been added to the stadium. The ship itself was also given a cosmetic treatment: the wood was cleaned, the paint was freshened, and the safety caps and screw connections were restored to make it safe for traffic.

There are now palm trees several meters high around the ship – and real trees! This makes the lingering pirate ship experience more realistic. Off the field, “the grass should grow over the thing” – the area where the grass is planted will be fenced off for a while without affecting the playing instinct.

Where did the new ship’s name, HMS Beagle, come from? Through this vessel, the famous scientist and researcher Charles Darwin explored the Southern Hemisphere and discovered previously unknown plants and animals in Australia and South America, which can now also be seen in the Rombergpark Zoo and Botanical Garden. The team is pleased that this component of the futuristic botanical garden concept is now complete.