Samsung Galaxy Z Fold3: What do we know about this terminal?

Lico² OLED It was announced today by Samsung’s “Display” division. The new panel, which debuted with the Galaxy Z Fold 3, is 25% more energy efficient than the Z Fold 2’s OLED panel.

The new technology uses a new laminated plate structure instead of the traditional polarizer. The laminated structure prevents external light reflection and increases light transmission by 33%. To sum it up, Eco OLED It’s a brighter screen with lower power consumption. 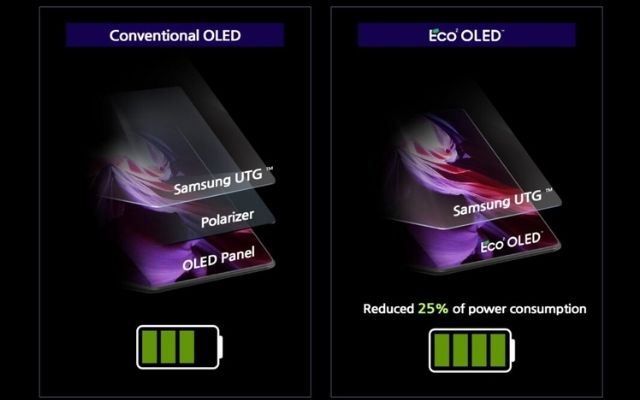 The Eco² OLED screen is one of the first screens to replace the polarizer. Hence, a polarizing panel, which is typically used in OLED panels, reduces brightness by 50% as it attempts to increase visibility by blocking light from outside the panel. The new screen also enables the camera located under the Z Fold 3’s panel, giving users a full screen experience. The company said in a press release:

The Eco² OLED panel not only improves pixel density, but with the added advantage of eliminating the polarizer, more light is exposed to the UPC, thus increasing the transmission to the camera unit. With minimal pixels applied to the top of the camera hole, Eco² OLED technology delivers a true full-screen design and increases visual space so users have a continuous panel to access their favorite apps, entertainment and games.

Samsung has patented the next generation panel in seven markets, including South Korea, the United Kingdom, the United States, China and Japan.