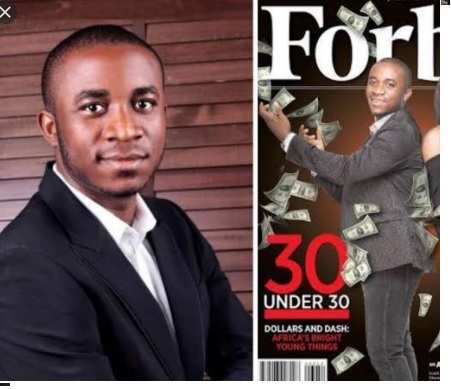 Forbes Magazine A young Nigerian businessman who made headlines four years ago by shining on the cover page is now counting dollars in jail. He was found guilty of cybercrime and embezzlement of Rs. Sentenced to ten years in prison. In 2016, Forbes magazine published one photo of Obinwan, a young Nigerian businessman known as Invictus Obi, on its cover page. However, in the same year he was charged with internet crime.

He was recently convicted by the Virginia County Courthouse in the case. A Virginia court found that Nigerian companies are hacking into public emails and misappropriating nearly $ 11 million (Rs. 80 crore) from their accounts. Against this background, the court sentenced him to ten years in prison alone. The court found that Obinvanne committed numerous cyber crimes between 2015 and 2019, including creating fake websites.

He was arrested less than two years ago on charges of seducing and deceiving victims. The manager of Unatrock Holdings Ltd, a major industrial and agricultural equipment export office, hacked the email in 2018, grossing nearly $ 11 million and taking it overseas. Forbes’ list of the most influential entrepreneurs under the age of 30 ranked first in 2016.