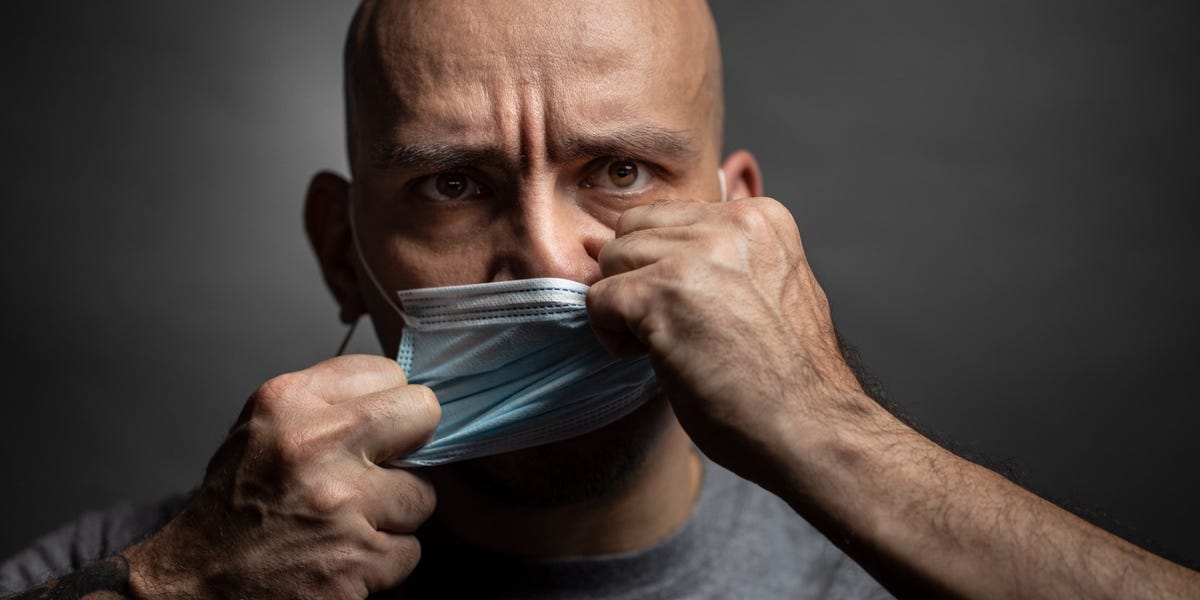 Some think that American politics is about personalities. Others think it’s about policies. But in reality, it may be about pieces of cloth.

In the Obama years, the president wearing a tan suit became a flash point for traditionalism and patriotism — or lack thereof, as the right wing criticized a Democrat’s perceived impertinence in wearing such a casual suit color. But the couture in the Trump years has gone from the Confederate flag to the Blue Lives Matter flag to the face mask that could save your life.

In this pandemic, the mask has become a symbol of defiance and freedom for those who refuse to wear it. For those who wear the mask, it’s a symbol of respect and responsibility. In turn, it has become perhaps the most polarizing and divisive symbol of the young decade, split down partisan, gender, and racial lines.

Those who wear the mask overwhelmingly tend to be Democratic, female, and minority-identifying, according to various studies. These are people who are used to dealing with legislation, rules, and regulations that impede on their personal choices: what young girls can wear to school, if women can choose to have an abortion, if Black people can wear braids to work, or, decades ago, if they could drink from any water fountain.

The survey evidence is clear.

In June, when Pew Research conducted a poll that broke down how Americans were feeling about the coronavirus, it found that 53% of female respondents said masks should be worn out in public, compared with 42% of male respondents. And 63% of Hispanic respondents and 61% of Black respondents reported feeling the same way, versus 41% of white respondents.

A July 13 Gallup poll showed that only 34% of male respondents said they wore masks all of the time, and 54% of female respondents reported the same. (This poll did not break down race.)

The mask as a symbol of American ‘fear’ and ‘frustration’

But the mask versus maskless debate is showing no signs of slowing down as the nation barrels toward 5.5 million coronavirus cases.

While the people who agree to be masked grew up in a nation where their personal liberties were always up for debate, the maskless say being told what to do goes against their freedom of choice and personal liberty.

This side seems to listen to President Donald Trump and his inconsistent messages of whether wearing a mask matters. In a June interview with The Wall Street Journal, Trump said he believed some people wore masks just to show their disapproval of him. Then perhaps the opposite is true — that not wearing a mask demonstrates you support Trump and everything he represents.

Or as Axios’ Jonathan Swan told Trump in a recent interview, these mixed or negative messaging on masks could be giving these people a “false sense of security.”

“I’ve talked to your people. They love you. They listen to you. They listen to every word you say; they hang on your every word,” Swan said in the interview. “They don’t listen to me or the media or Fauci. They think we’re fake news. They want to get their advice from you. And so when they hear you say, ‘Everything’s under control; don’t worry about wearing masks,’ I mean.”

The message from health professionals has been steady for a while: Wearing a mask will help prevent the spread of this virus. Dr. Anthony Fauci, the director of the National Institute of Allergy and Infectious Diseases, has been the most prominent of these voices, which was a major reason that Trump eventually sidelined him, an analysis from The Washington Post said.

Leela Magavi, a psychiatrist based in Newport Beach, California, told Business Insider that for the most part, the mask has become a symbol of American fear and frustration as uncertainty looms over the future course of the virus and the economic recovery.

“Individuals displace their emotions on inanimate objects all the time,” Magavi said. “A lot of times, it’s very painful for people to just express, to even their loved ones, that they are struggling. … And so what happens when people suppress emotions, these emotions, they get displaced onto other things.”

Magavi said she believed the mask has transformed into a symbol that represents the autonomy that has been taken away from so many people. People asserting their choice over whether to wear a mask is an attempt to try to regain control over their lives, she said.

Her statements seem to echo familiar themes of “losing control” and “regaining control” that have been swirling around the right wing and Republican Party over the past decade.

This rhetoric emerged perhaps most prominently during the Tea Party era, which began in the midterm elections of 2010, two years after Obama’s election. The Tea Party, ostensibly concerned about tax policy, was driven mainly by white conservatives, and Trump’s shocking 2016 victory cast its legacy in a different light.

There was talk of immigrants taking jobs, the dwindling population of American whites alongside the rising population of minorities, and the nation becoming less and less Christian-based. Trump emerged and was able to speak with some force about these issues, which have proved worrisome to his voters.

For example, in 2015 Trump spoke on the issue of illegal immigration at a rally in Phoenix, telling the crowd, “We have to take back the heart of our country,” and framing the issue as one of dangerous social change.

His ability to attack Democrats, minorities, and women, within the conversation of “losing” and “regaining” control of the nation, takes on a new meaning in the mask debate, in which the all former categories are shown to be those most likely to adhere to the mask mandate.

For Trump followers, however, it becomes just another national conversation in which they have “lost” control.

“It has come to a point where I’m seeing individuals come into the clinic saying that ‘the liberals, the Democrats are telling me to wear [the mask] to stifle me and to silence me, and I’m going to speak up and I’m not going to let them do this to me,'” Magavi said.

On the left, she said people are saying, “Republicans don’t care about other individuals, they are egocentric, they aren’t wearing masks, what are they trying to prove, they are trying to kill everyone.”

The dawn of a new era

In July, another Pew Research poll found about a third of Republicans believe the coronavirus was planned by global elites, compared to just 18% of Democrats.

Other conspiracies reflect anecdotal claims that vaccinations will be given with tracking chips, to be activated later by 5G cellular networks. Others say that the virus has been overexaggerated by Democrats to try and hurt Trump, or was even manufactured in a Chinese lab. Trump himself has said things supporting the notion that the virus was made to hurt us, as a nation.

The underlying themes of these conspiracies center on the notion that there is someone, somewhere, out to replace and hurt somebody or something. In these highly emotional and volatile times, maybe believing such things helps people to regain a tiny bit of the narrative they no longer have control over.

But then again, perhaps these fears were best-expressed by yet another piece of cloth: the jacket Melania Trump wore when she visited detained immigrant children at the US-Mexico border: “I really don’t care, do U?”