More than 13 million Britons have been vaccinated 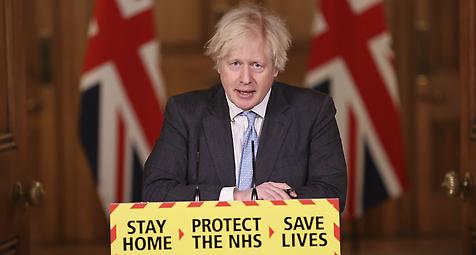 London In the United Kingdom, more than 13 million people have now received their first vaccination against SARS-CoV-2. Prime Minister Boris Johnson announced this yesterday in London. Thus, the government is well on its way to achieving its self-imposed target of 15 million first vaccines by the middle of the month.

About 520,000 Britons received a second injection. In England, which is the largest part of the United Kingdom, every fourth adult is now vaccinated, according to the government. The number of new infections recorded yesterday was just over 13,000. At the same time, more than 1,000 other deaths were recorded. Both indicators are clearly declining.

The seven-day infection rate, that is, the number of new infections per 100,000 people in a week, is now about 190 nationwide. The government’s chief medical adviser, Patrick Vallance, was satisfied. This is also of great importance in combating new mutants.

Just yesterday I did the Health Authority Public Health England A modification of the British Particularly Infectious Virus Variant that was detected in Bristol has been classified as a Variant of Concern. It also bears the characteristics of the South African variant, which has been linked to a decreased immune response in treated or vaccinated people.

Valance said it was a common mutation. So he is not surprised. The Bristol variant is now more likely to cause an altered immune response. However, it must first be clarified if and how exactly this was the case. We have to look for it, capture it, keep it under control, and test the effectiveness of vaccines in this case. © dpa / aerzteblatt.de